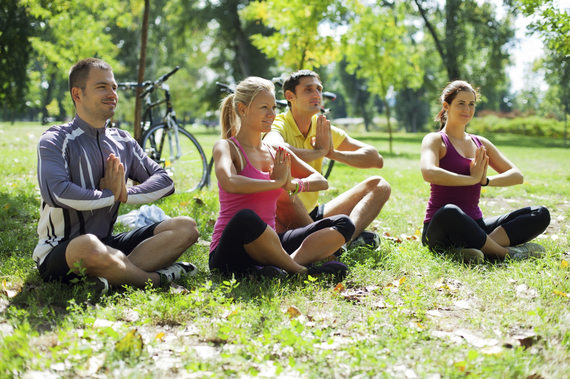 When we think of teens and 20-somethings, we think of people in constant motion. They're growing, changing, moving toward the next big discovery about who they are and who they want to be. But my friend Jesse Israel, who founded Medi Club, the meditation group that I've been part of since last year, says that when young people consciously take time to slow down, they can actually get where they want to go faster.

"What we hear a lot is that meditation is great for relaxation and staying calm," says Jesse, who's 30. "But what's also true is that meditation helps you understand what you stand for in life. Through meditation, I've experienced shifts in awareness that have changed how I work, how I date, how I think. Without all that stress running through my body, I'm able to make clearer decisions, and to live my life more in line with the person I want to be."

Medi Club, which meets monthly, numbers several hundred young people living in and near New York City -- entrepreneurs, writers, artists, bloggers, deejays, app developers -- who all have a regular meditation practice. And now Jesse is taking the practice to a much wider audience with the Big Quiet, a group meditation in Central Park that's free and open to all. It takes place this Saturday, June 20, at SummerStage in Central Park; doors open at 4:30 p.m. and the event begins at 5:00 p.m.. Thirty minutes of silent meditation (with instructions offered for those who want them) will be followed by a concert by the bands Jungle and Ibeyi.

Jesse's goal is to increase awareness about the power of this practice, for all ages. "We want to young people that they can have a daily practice of meditation," Jesse says. "Our generation is hungry for the deeper connection."

Jesse's dedication to the practice comes from personal experience. He was 26, running his own record label, which he'd started in college, when he gradually realized he was no longer inspired by his work, and the stress was wearing on him. He says it was meditation that got him out of his rut and put him on the path toward knowing himself better and taking steps to follow his authentic desires. With the support of his practice, he made the big move of leaving the company he'd founded and embarking on a new venture. "The practice gave me the courage to take that leap and trust my intuition," he says.

A consistent daily practice of meditation can actually change our brains, making us more compassionate and resilient. A study of Buddhist adepts (experienced meditators) showed greater activity in the regions of their brains related to compassion and empathy, as well as stronger connections from the frontal regions to the emotion regions -- the pathway by which higher thought can control emotions. Evidence-based findings like these have powerful ramifications for teens, whose brains are still developing.

Psychiatrist Dr. Michel Mennesson says that a practice of meditation can foster a healthy distance between the thinking mind and the observing mind. "Meditation, by encouraging the observing function of the mind, creates the awareness that our thoughts are not facts, they're just thoughts," Michel says. "Concentration exercises such as meditation can help reduce overthinking, which is what we see in both depression and anxiety."

Anne Novak, who teaches the yoga component of our curriculum at Newport Academy, sees on a daily basis how contemplative practices like meditation and yoga impact adolescents' lives -- by giving them an opportunity to practice being with their emotions without reacting or running away.

"It's a safe way to experiment with pushing your limits and to observe how you react in an uncomfortable situation as emotions arise," Anne says. "When you sustain the practice, despite discomfort, you create new neural pathways and break out of old patterns. This translates off the mat and into the world." Research shows that regular meditation reduces activity in the amygdala (the part of the brain that processes emotion) even when the practitioner is in an ordinary, non-meditative state.

To illustrate the way these practices work, Anne tells a story about the nature of cattle versus that of buffalo, which accounted for buffalo's higher survival rates (before commercial hunting nearly eliminated them). Cattle will instinctively try to escape from a storm and, since they can never outrun it, they eventually become exhausted and suffer from exposure. Buffalo, on the other hand, stay where they are and let the storm pass over them. This is a metaphor, Anne says, for what happens on the meditation cushion or the yoga mat when confronted with emotions.

"We get the idea that we can't handle the pain, or we're never going to be happy again, or the anger will make us destructive," Anne says. "The reality is that, when you sit with your emotions, they arise and then they subside."

Building the capacity to weather storms can be one of the most important tools for adolescents and young adults during this turbulent time of life. My hope is that the Big Quiet will introduce millions of young people to this life-changing practice.