The most renowned meditation master in Tibet, Akhyuk Rinpoche, Jamyang Lungtok Gyaltsen (aka Drubwang Lungtok Gyatso) passed away Saturday at his remote encampment in the highlands of Eastern Tibet. Together with the late Khenpo Jikmé Phuntsok (1933-2004) of Larung Gar Buddhist Academy, Akhyuk Rinpoche revitalized the study and practice of Buddhism in Eastern Tibet beginning in the 1980s, eventually drawing tens of thousands of students from across Tibet and China to his Buddhist encampment of Yachen Gar. 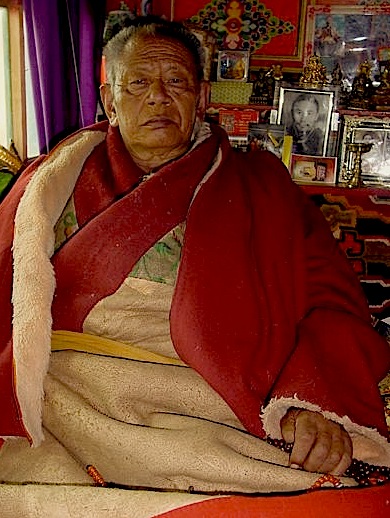 I first met Akhyuk Rinpoche (pronounced Acho) nearly fifteen years ago, and continued to visit him whenever I returned to Eastern Tibet. Every time I met Akhyuk Rinpoche something extraordinary occurred that profoundly impacted my mind and perspective on spiritual practice. I feel extremely fortunate to have received teachings from Akhyuk Rinpoche, as he was truly one of Tibet's last great yogis who was formally trained and practiced in Tibet before the Chinese occupation in the 1950s.

The first time I went to see Akhyuk Rinpoche I arrived like most other pilgrims to Yachen Gar, dust covered and spent from long days of travel by bus through Sichuan Province and then hitchhiking and walking on the Tromthar Plateau. Akhyuk Rinpoche was staying in his one-room hermitage where he had been for the past decades, sitting in meditation, when not receiving students and pilgrims. I asked the rather stern looking monk for a blessing and after reciting a few prayers, Akhyuk Rinpoche reached towards his chest and pulled from his bare skin a ringsel, a kind of pearl-like relic that is often found in cremation pyres of saints. I had only read about ringsel, never having seen one, and certainly did not know that the sacred relic might manifest while the saint was still alive. I later learned that such physical signs of spiritual realization indeed could come during the life of accomplished yogis. Upon handing me the small ringsel, I felt, for a few minutes, what can only be described as, my awareness knew no bounds. Akhyuk Rinpoche recommended that I wear it in my amulet as a protection. I felt as though it was a reminder of how the mind is when it is set free from the habitual patterns of chasing after thoughts.

On another occasion a year later, after giving a short Buddhist teaching to my Tibetan travel partner and me, Akhyuk Rinpoche spontaneously pulled his shirt and shawl over his head and yelled, "What do you see?" Upon looking on his chest, a shadow-like but very clearly defined triangular shape, pointing downward, extended the length of his body, as well as a darkened swoosh on his neck, as if painted lightly with an ink brush. The unconventional master explained that the triangle shape was the appearance of a ritual phurba-dagger (used to vanquish the self-cherishing ego) on his body as a result of deep states of meditation. That I could see it was a sign of our spiritual connection, but because the details were not clear was an indication that I needed to spend long periods in meditation retreat. The ink swoosh, Akhyuk Rinpoche told me, was a sign of the blessing of his own teacher, Arik Rinpoche, who had a long whispy beard.

I heard many such mystical stories about Akhyuk Rinpoche from his students during my ten-years of travel throughout Tibet. Students spoke in awe of his vast learning, where he could recite entire books by memory. Yet, the most significant impact Akhyuk Rinpoche had on students was in his unique way of guiding them through their meditation and yogic practices.

"To be taught such practices from a master who has himself accomplished them, reached the pinnacle of the practice, this truly has the power to impact our minds," a senior student at Yachen Gar once told me. "Otherwise, it is just dry philosophy and book knowledge that does not penetrate to your heart." That thousands of Akhyuk Rinpoche's students spent years in meditation retreat, and are continuing to do so, is testament to their devotion to emulate their teacher's profound path of spiritual accomplishment.

Akhyuk Rinpoche experienced great hardship in his life, especially during the Cultural Revolution (1966-1976). Eventually, after the death of Arik Rinpoche in 1988, Akhyuk Rinpoche began teaching. Students settled around him in the barren highlands of the Eastern Tibetan where the monks and nuns lived in simple mud-walled houses, burning yak dung for fuel. Above fourteen thousand feet in elevation, windswept and exposed, it offered few comforts. For the hermits, however, the infinite sky view and lack of distraction found in villages and cities make it ideal for meditation. The meditators were once described to me as, "sons and daughters of the mountains choosing mist as their clothes and meditation as their food."

During the 1990s, the population of monks and nuns at Yachen Gar (also known as Yachen Orgyen Samten Chöling) grew to over 7,000. Despite the nonpolitical nature of the monks and nuns meditating at Yachen, trouble was at their doorstep. The Chinese authorities deemed problematic this encampment of adobe huts and tents filled with meditating monks, nuns and lay practitioners. Not only did such an encampment exhibit the strength and resilience of Tibetan identity and its unique wisdom culture, it also stirred the principal fear that the Chinese Communist Party has about Tibet; a complete lack of legitimacy, even after 60 years of rule. In the fall of 2001, just months after the demolition of thousands of homes at the Larung Gar Buddhist Academy in Golok, Chinese authorities acted upon their fear and ordered the demolition of large parts of Yachen Gar. I visited Yachen during this dark time to photograph the destruction, and subsequently wrote about it in In the Shadow of the Buddha: Secret Journeys, Sacred Histories, and Spiritual Discovery in Tibet.

Akhyuk Rinpoche remained at Yachen Gar during the demolitions and told his students not to generate anger towards the government's actions but rather to empathise with government officials who were in fact bringing upon themselves future suffering by their present negative deeds. Despite the destruction and repressive policies by Chinese authorities, Akhyuk Rinpoche continued to teach his students and the monastic community survived with a new nunnery being constructed in recent years and plans for a medical clinic for meditators.

During my last visit to Yachen Gar, Akhyuk Rinpoche told me the authorities from the provincial capital telephoned him every day to check on his whereabouts. Such calls had been kept up for years. I asked Akhyuk Rinpoche what he tells the Chinese police.

"Every day I tell them I'm in the same place I have been for the last twenty years; sitting in meditation at my hermitage!"