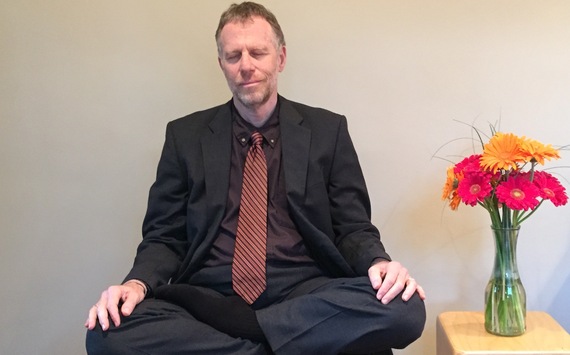 This is number one in a series in which I dispel the most common myths that prevent people from practicing and enjoying meditation.

I live on the border of Santa Monica and Venice, California, one of the crunchy-chewiest neighborhoods in America. From my house, I can walk to a football field-sized Whole Foods, two farmers' markets (one featuring local acoustic bands and a petting zoo), three electric bike stores, four or five vegan restaurants, one vegan supermarket, a bunch of organic cotton clothing shops, a weekly seaside drum circle, and several marijuana collectives.

On almost every sidewalk there seem to be one or two yoga gals, strolling along in their yoga pants, carrying their rolled-up yoga mats, on their way to one of the dozen or so yoga studios. As I head to my favorite local café, I know I won't have to ingest GMOs or artificial preservatives when I get there... if I get there without first being mowed down by one of the silent Priuses (aka eco-stealthwagons) that prowl the streets.

But about those yoga studios. One of them, interestingly enough, has a big sign out front proclaiming, "NO CHANTING, NO SANSKRIT, NO GRANOLA."

Now, I happen to enjoy the occasional Sanskrit chant... and the occasional bowl of granola, for that matter. But I take the point. Sometimes, especially in a place like this, the Namasté culture can get so thick that it could dissuade some folks from taking advantage of the more straightforward benefits of yoga. "I'm not the type," they might say (or think), meaning something like, "I'm not your basic touchy-feely yoga gal," or, "I'm not your stereotypical dreadlocked bamboo-flute-playing sensitive New Age guy."

And the media are no help either. Have you noticed that whenever you see a yoga class in a sit-com, we cut in just as the instructor says, "OK, everybody, downward-facing dog," just because it's the pose with the most mockably weirdo name? Cheap laugh.

For decades, it's been much the same deal for meditation. When I first started teaching it, way back in another millennium, I began every lecture with a disclaimer that meditation had nothing to do with crystal balls, flying carpets, or beds of nails. Sure, it was a joke, but it was a joke I felt I had to make, just to clear the air.

But in recent years things have gotten a lot better. By now we've had decades of scientific research demonstrating that meditation (like yoga) has tangible, describable, repeatable, beneficial results, everything from sounder sleep to quicker reaction time to beefing up of brain structures associated with learning, memory, introspection, and compassion. People who would never meditate to raise their awareness are doing it to lower their blood pressure.

We also have a raft of meditating high achievers who, wonder of wonders, haven't melted into a puddle of "Dude... whatever" passivity. In fact, they report that their meditative practice has boosted their success by boosting their clarity, energy, and capacity for grace under fire: NBA coach Phil Jackson, billionaire hedge fund manager Ray Dalio, Jerry Seinfeld, Oprah Winfrey, Martin Scorsese, Russell Simmons, and the list goes on. Some of them, like Howard Stern, are about as far from "the type" as you can get.

Yes, there's a deeper aspect to it, an inner dimension that makes it more than just brain calisthenics. Meditation is, in fact, resting in inner silence, and as that silence gradually percolates into the rest of your day, it becomes the state of unshakable happiness and peace that sometimes goes by names like nirvana or enlightenment. But there's nothing exotic or mystical or crunchy-chewy about enlightenment; it's the most natural, straightforward thing in the world. (And the best.) Frankly, that's what drew me to meditation. My blood pressure's always been fine, thank you, and I don't harbor dreams of being a mover and shaker in Hollywood or on Wall Street. If that's all it were about, I'd never have been interested.

Certainly, the image of meditation in the zeitgeist has shifted. Especially in these last few years, it seems to have reached some kind of critical mass of cultural acceptance. When I had books published in the past, I was happy if I could get a mention in Yoga Journal or Science of Mind. For my latest book, I've been interviewed by Prevention, InStyle, and... wait for it... Family Circle. Can you get more mainstream?

This dramatic change resembles the astonishing shift in attitudes toward gay rights, and I suspect that it's for a similar reason. A few years ago, the culture reached a tipping point where practically everyone realized they had a friend or neighbor or colleague or family member who was gay and who was a perfectly nice person, not a monster. Now we've reached another tipping point where practically everyone realizes they know someone who meditates and isn't a robe-wearing monk or a hippie weirdo... who, in fact, seems to have their act impressively together.

Meditation doesn't turn you into a different "type" of person. I've been doing this stuff for a long time. I still love films and music that are definitely not allowed in the ashram, and I still eat stuff that horrifies my vegan friends. Meditation does help you become the best, most centered, most clear-headed, most compassionate possible version of the person you already are. And you get tuned in to the silence that's deeper than all that person stuff.