This is number three in a series in which I dispel the most common myths that prevent people from practicing and enjoying meditation.

When I tell people I teach meditation, their next words are often something like, "Oh, meditation. Yeah, I was thinking of getting my mantra. Hey, you do need a mantra for that, don't you?"

Well, no, you don't. Not necessarily. 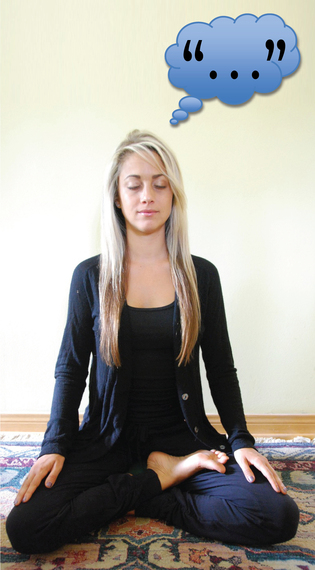 There are many methods of meditation. They're often labeled in terms of their historical pedigrees, such as Zen or Vipassana. But when we look at the nuts and bolts of how they actually work, most methods use some kind of "vehicle," an object on which to rest your attention as you turn within. The vehicle is just a means to an end; you use it to lose it. After you drive to the Grand Canyon, you get out of your car and enjoy the view. In the same way, once the meditative vehicle has helped you settle into inner quietness, it has served its purpose.

Mantras are one such vehicle -- but only one. They're soothing sounds that are psycho-acoustically suited to this settling process. Many people have heard of mantras because they're used in Transcendental Meditation (aka TM), which was brought onto the pop culture radar in a big way by Maharishi Mahesh Yogi and the Beatles in the 1960s. By the '70s, Woody Allen (with an assist from Jeff Goldblum) turned the TM/mantra phenomenon into a punch line in Annie Hall. More recently, David Lynch has been active in re-popularizing TM, bringing it to high school students and veterans through his foundation, and a whole raft of celebrities, including Martin Scorsese, Howard Stern, and Oprah, are on board.

But you can practice mantra meditation without taking a (very expensive) TM course, and there are many other equally suitable vehicles, including the breath, the open sky, certain spots in the body such as the "heart center," and the intuitive sense of "I," the experiencer of all your experiences. No matter what the vehicle is, new meditators tend to make a big deal out of it. That's understandable. In an otherwise intangible process, it's the most concrete element, the one you can get a handle on. Often newbies worry about which vehicle is "right" or "best." But it really doesn't matter that much.

If you're attracted to meditating with mantras, that's fine. Despite what some people will tell you, especially the TM folks, there's no uniquely "right" sound that's the only one your particular nervous system will resonate with. (I've researched these matters experientially and extensively, including several years as a qualified instructor of TM before moving on to more open, accessible approaches.) A number of suitably short, smooth, mellifluous mantras have been test-driven for centuries in India, Tibet, and elsewhere. Two very popular, tried-and-true mantras are ah and om. (The final letter in om is not really the m of English -- it's more like the nasal n in the French bon, with the lips finally coming together very lightly at the end.)

But, again, the choice of vehicle isn't crucial. When you drive to the Grand Canyon and it doesn't much matter whether you got there in a Ford or a Chevy. What does matter is how you drive. If you keep grinding your gears, slamming into trees, or trying to run all those pesky pedestrians off the road, you're going to have a long, bumpy ride. If you mentally hammer away at the mantra and try to use it to force out all your thoughts, it will be a strain and soon you'll probably stop practicing -- which would actually be very sensible. As sages and buddhas have taught for centuries, the most effective way to meditate is the easy-does-it method: gently, lightly, doing almost nothing at all.

This vital point is all too easy to miss. It's often assumed that you have to work at focusing on the mantra (or breath, or whatever) and push away everything else, all the passing thoughts and sounds and feelings. But that's counterproductive. Any effort to create a non-agitated state of mind is itself a form of agitation. It's like flailing and pounding at the surface of the water, trying to flatten out all the waves. It's much easier to just take it easy and let yourself sink into the silent water beneath the waves.

To do this with a mantra, you can start by vocalizing it for a while in an easy, relaxed manner, then settle naturally into subvocalizing, eventually leaving off doing even that, so that the mantra becomes just a lightly held thought -- not necessarily definite or clear, just a subtle mental echo of the sound. Then let it be however it is; let it go however it goes. Don't try to hold onto it. In its own time it will tend to fade away, leaving you resting naturally in inner quietness. Abide there for as long as you like. Anytime you find yourself back in a less quiet state, you can once more pick up the mantra, again as just a subtle echo, and take another dive. In later sessions, you may find that it feels more natural to skip the out-loud part.

So, it turns out that the best way to drive the vehicle, whether it's the sound of a mantra or the sight of the open sky or anything else, is with a light touch, on cruise control, with your hand barely on the wheel. Eventually you realize that you're actually not driving at all... and never have been. Thousands of years before the Google car, the sages who discovered these profound methods of meditation knew all about self-driving vehicles. Sooner or later you realize that you're in the passenger seat, and have been all along. What a good teacher does is to help you see it sooner. Then you can just sit back and enjoy the ride.

The reason this works is that the road isn't level -- it slopes downhill toward inner silence, fulfillment, satisfaction, wholeness. People often think of this inner fulfillment as something mysterious, deeply hidden, to be found only with great difficulty, but in fact the mind is being pulled toward it all the time. It's what we're really seeking when we seek happiness in our experiences of the outer world. We're constantly gravitating toward it. So, by just resting our attention on any meditative vehicle, be it a mantra or anything else, and relaxing our grip, we can let gravity take over. Not concentrating, not focusing, just resting. Ahhhhhhh!

More:
oprah winfrey the beatleshealthy livingAnnie Hall howard stern
Newsletter Sign Up
The Morning Email
Wake up to the day's most important news.
Successfully Subscribed!
Realness delivered to your inbox