Shinzen's words inspire me, because they remind me that, while we all desire to improve ourselves and the world, our clouded minds are generally unable to parse the world enough to do so. I believe that in this endeavor, meditation is the key. In the written word, it's easier to be convincing than emphatic, so I'll try to be as convincing as I know how to be.

Meditation will change your life -- drastically, and there's a very good chance it is the answer you are looking for. In the short term, it provides more focused attention, ability to deal with emotions, and fulfilling relationships. In the long term, it will drastically transform you into a person in control of your own mind, mindful of the world around you, and liberated from mental chaos. 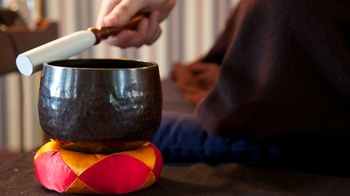 The bowl is rung at the start and end of a group meditation sit.

Our minds are out of control. If you're anything like me, a quick look into your thoughts will reveal that while a few are productive or new, the majority are ruminations and critical statements borne of a mind constantly spinning its wheels. Any attempt to stop or control these thoughts will quickly reveal that willpower alone is not enough; it takes careful training.

Consider, then, a reality where your mind has even 20 percent less clutter... or 40 percent, or almost none. Where thoughts, observations, and intentions are felt clearly. This is the promise of meditation.

My first attempts at meditation were half-hearted. A friend convinced me to sit for about 15 minutes several times per month, which was just enough to notice how badly I needed meditation and nowhere near enough to do much about it. It was unbearable sitting still and being in my own mind. Practicing more seriously was a way to directly address this aversion, and doing so has been so helpful to so many parts of my life. Practice in sitting still has already helped me in all elements of life -- a writing project that used to take several days can now (on a good day) be done in a few hours, because I'm able to sit still and focus.

The black box of machinery that is my mind has become a touch more transparent, and I'm a touch more able to see what is going on inside. Our minds are composed of disparate pieces, many of which want different things, and understanding these processes better has helped me accept when some of these parts are unhappy. By extension, I've been better able to deal with unpleasant situations and conflicting emotions without fear.

There is plenty further for me to go. I have not reached a point where I can spend 45 minutes focusing solely on my breath; most of the time, to even sit down involves a mental battle, with half of my mind dragging the other kicking and screaming onto the meditation cushion. But these same sits end with a feeling of clarity and an uptick in joy that can last the entire day.

You can start right here, right now. In fact, before you read on to the next sentence, give yourself a full minute. Close your eyes, breathe, and observe your mind in the present moment. Are you joyful? Tired? (You're probably tired.) Do you see thoughts in your mind, or is it fuzzy and obscure? Are you able to be present in the moment, or are your thoughts racing?

Now, before you begin to meditate, it's important to understand what meditation is and isn't. It's not thinking or contemplating -- it is an exercise in focus. It's not intrinsically religious, though the wisdom traditions of Buddhism and many other religions provide insightful guidance. It is usually one part of a spiritual path that includes study and moral living, but it doesn't have to be.

The first step, and what will at first feel like a gargantuan effort, is to establish a consistent sitting practice. This step in itself can be life changing as your realize that many of your reasons to not meditate are spurious, an outgrowth of an overactive and panicky mind. Set a timer (I recommend starting with about 15 minutes per day and working your way up to 45) and don't move until it rings. One of the first observations of the Buddha was that the human body is constantly shifting to avoid discomfort -- learn to stay still, and the discomfort or pain will teach you a lot (and it does go away over time).

Most meditation is a variation on a theme: Pick an object of meditation and focus on it -- I recommend the sensations of my natural breath on the tip of the nose (I use my mouth whenever I'm congested). When you realize that you can't follow it, practice redirecting your attention back to the breath without judgment. In fact, this moment of realization is the muscle you are trying to strengthen, so encouraging it will further your practice. Training your mind is like training a pack of animals -- consistency and positive reinforcement, not will or frustration, will make a change over time.

And over time it will change. I am inspired by the examples of people who have clarified their lives and discovered a new level of empathy and understanding.

If you are interested, there are plenty of places online to learn more! My teacher Upasaka Culadasa (a former neuroscience professor) explains the technique and the spiritual path with a clarity like no other (most of my wording here has been directly borrowed from his teachings, though I make no claim to represent them fully), and I highly recommend his website Dharma Treasure. The front page provides instructions for beginners, an overview of the steps of meditation, and an extensive archive of fascinating talks on topics ranging from the self to the nature of consciousness and reality.

If you're not interested, if you're not convinced, try it just twice. And then try it twice more. Consistency is difficult, but that's how to turn the practice into something that will change your life. I guarantee that you are standing at the precipice of the solution you've been looking for.

For more, I recommend the aforementioned Dharma Treasure website and Daniel Ingram's "Mastering the Core Teachings of the Buddha," which is available for free online.

Check out Michael's photo album of the beautiful landscapes at Roslyn Center in Richmond, Va.