I grew up in England, where I attended a "public school," which confusingly is the English term for a private school. I dressed up every day in a black suit, wing collar, black tie and waistcoat. This was the bootcamp training for becoming an English gentleman. I was born into a way-above-average unhappy family, and I was much more interested in sorting out my emotional pain than in being trained to be an aristocrat.

One day I was walking beside Canterbury Cathedral (The King's School, Canterbury is the oldest school in England and lives within the cathedral precincts) when I spotted a man sitting cross-legged on the ground, chanting. He was a Hare Krishna monk. This was 1972, only a few years after The Beatles hooked up with Maharishi Mahesh Yogi and then later George Harrison joined up with the Hare Krishna movement. I was intrigued. I waited timidly until he stopped chanting, and approached hesitantly. 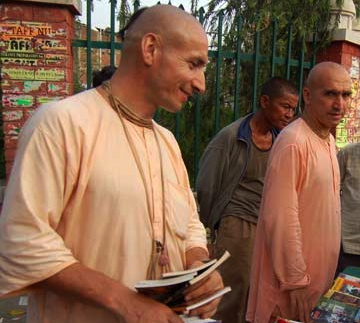 "Excuse me, sir," I squeaked in my pre-pubescent English voice. "Do you speak any English?" I imagined he must be from Tibet, or a temple in Varunasi, India.

"Yeah, mate, sit down. I'll tell ya all about it." He was an ex-gang-member from the East End of London. I was fascinated. He talked about Krishna and reincarnation and enlightenment and all kinds of other things that were as exotic to my thoroughbred English mind as they were alluring to my longing heart.

That night, I popped some money into the phone box to call my mother. I proudly announced to her that I'd decided to become a Hare Krishna monk. She threatened to commit suicide, so we had to make a compromise. I learned to meditate instead.

Back then, learning to meditate came with some pretty lofty expectations. Ardent practitioners were all very confident that daily practice would lead to a state, within a few years, where all psychological suffering would end. This sounded like a great deal to me, and I meditated enthusiastically through my entire teenage years.

I never found that particular pot of gold at the end of the rainbow, and in fact, to the best of my knowledge, nobody ever did. The idea of a place of final arrival beyond all suffering proved to be a carrot on the end of a stick, peddled by Indian gentlemen with more charisma than integrity. Most of the children of the '60s that I know have given up on the idea of enlightenment as a goal now.

Meditation had also been peddled, over the years, as a great way to reduce stress, and scientific studies have been conducted to prove the point. But other studies, equally convincing, demonstrate that men can reduce stress by pumping iron at the gym combined with using the right supplements (this increases testosterone, the antidote to cortisol and adrenaline) and women reduce stress by enjoying a glass of wine and a good gossip with girlfriends (social down time for women secretes the hormone oxytocin, which also has been proven to balance cortisol).

Meditation has also been promoted as a way to increase your capacity to manifest more and better stuff. Advocates of the law of attraction tell you that if you learn how to use your mind consciously, there's no limit to the amount of shiny new gizmos it can bring into your life. Beside the ecological ethics of encouraging this kind of consumerism, it blatantly doesn't work.

And as it was for me when I was 14, meditation is also attractive to people with deep-rooted psychological problems. Trying to use meditation as a way to heal emotional pain is sometimes known as "spiritual bypassing," and more often leads to a place of frozen denial than any real healing.

You might be thinking by now that I've gotten cynical about meditation over the years, but quite the opposite is the case. I spend at least a couple hours a day in meditation every day. My motivation is one that needs no scientific studies or lofty claims.

I meditate because I love it.

If you're out and about in the town and someone texts you to go to a movie, you might want to read the reviews to see if it's worth spending the time. You need a reason to watch a film. If someone invites you out to dinner, you also have to consider, "What kind of food?" "Can I afford it?" and "Do I like the people that invited me?" The same would be true for almost any other kind of activity that involves going out somewhere. But you don't need justification for eventually going home. Home is where you live. Home is where it's comfortable. Home is where it's familiar. Home is where you find peace. Home is where you rejuvenate. And so it is, for me and most of the people I know, one by one every external reason for meditation has dropped away, and you're just left with meditation itself.

My friend Sally Kempton has been meditating regularly for more than 40 years. She's probably one of the most knowledgeable and experienced meditation teachers in the world, and her students include people like Elizabeth Gilbert, author of "Eat, Pray, Love." I read Sally's latest book, "Meditation for the Love of It," over the Christmas vacation, and it's probably the best guide to meditation that I've ever read. It's suitable for the novice as well as the seasoned, hard-core veteran. It guides you through the entire landscape: what to do with thoughts, how to be with boredom, how to bring intention or prayer into meditation, even down to what kind of pillow to use and what kind of relationship to build with it. I'm going to interview Sally Kempton on Thursday, March 31 at 6 p.m. PST on a free tele-seminar. She's a wonderful woman, and I hope you'll join us. If you can't make the live call, register anyway and there will be a replay available. Register for the free tele-seminar here.