The traditional Greek diet circa 1960 is considered one of the healthiest, if not the healthiest diet, in the world. It served as the basis of the Mediterranean diet as we know it today. Let's see 5 healthy habits of the Greeks. 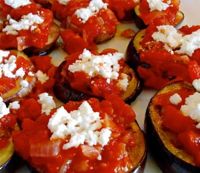 1. Cook your vegetables in olive oil

According to the CDC only 26% of adults in the U.S. eat vegetables 3 times a day. On the other hand, other statistics show that Greeks consume about 17 oz. (500 grams) of fruits and vegetables a day.

How do Greeks manage to eat over a pound of fruits and vegetables every day? Well, they cook their vegetables. Sure, they eat salads and have plenty of vegetarian appetizers, but the vegetarian main course is what really sets them apart. Even today most Greeks consume vegetables as a main dish 2-3 times a week.

When I say cook, I don't mean a plate of boring, boiled vegetables with a lump of butter or melted cheese. These dishes, called lathera, which means "the ones in oil," are a combination of vegetables, herbs, tomatoes and olive oil. Common vegetables used are green beans, peas, eggplants, leeks, artichokes, cauliflowers and okra. One serving is a large plate, which is about 3 servings of vegetables. Eat it with some bread and a chunk of feta and you're set.

Yes, olive oil has antioxidants and is one of the best sources of the good monounsaturated fat. Most recommendations advise using olive oil as your main source of fat, but you need quite a bit, 1-2 teaspoons a day won't cut it.

The Greek-Mediterranean diet is not a low-fat diet, but it is mostly vegetarian. Greeks are (and have always been) the world's largest consumers of olive oil, with the average Greek using about 23 liters a year. Isn't that too much? Well, not really; especially if you are eating mostly vegetables, the calories balance out. Greeks do most of their cooking with olive oil and traditionally most of that olive oil was used for cooking vegetables as a main course, like the ones I describe above. And no, you don't have to worry about cooking with olive oil. When cooking at home, you won't reach the smoke point of olive oil (as we are often warned) in a common household stovetop or oven.

Keep this in my mind: 3. Drink Water like a Greek

Henry Miller best described the special relationship Greeks have with water when arriving in Greece: "The glass of water... everywhere I saw the glass of water. It became obsessional. I began to think of water as the new thing, a new vital element of life."

Yes, a glass of water is vital for the Greek.

In Greece, water is as necessary as olive oil is for food. The moment you sit down at a restaurant, the first thing to come is a bottle of cold water. Go to a Greek house and you will be offered a glass of cold water. Their refrigerators are full of bottles of cold water. If you go out for a coffee, a glass of water will always come with it. If you are served a dessert, the water is there again.

Yes, you know water is good for you: our bodies needs water to function and it keeps you from drinking other "things" (soft drinks, juice, pseudo-water beverages). You probably keep bottles of water in your car, on your desk and at home as you try to chug down those 8 glasses of water every day. How about just enjoying a plain, cold glass of water with all your meals? Water doesn't have to be like medicine; in fact, it can be "pleasant as honey," as Pindaros an ancient Greek poet once said.

4. Eat dessert on its own

The idea of having dessert after a meal is a fairly new concept in Greece. Thirty years ago people used to eat a dessert, a gliko only during the holidays or when they went out, or if they were offered a sweet as a guest at somebody's house, but you never had a dessert after a meal.

In Greece, people would typically eat fruit after a meal. I remember after every meal my grandma would bring one or two fruits to the table, along with a knife and a plate. She would then sit with us, cutting the fruit at the table and placing it on the platter for all of us to eat.

At the tavernes here in Greece, the waiter will automatically bring a complimentary platter of seasonal fruit at the end of the meal. Fruit is considered an important part of the meal like bread or wine.

The next time you eat a dessert, make it something special, eat it alone or with your favorite tea or coffee and really enjoy it.

5. Add lemon and oregano to everything.

Okay, well almost everything. We know from research that the Mediterranean diet is not about eating specific foods but rather the incorporation of all the foods to your diet, including condiments.

There are two condiments that a Greek kitchen will always have: lemon juice (from real lemons -- none of that fake bottled stuff) and oregano.

Lemon
If you go to a Greek restaurant, almost everything you order is accompanied by a lemon wedge (that you are supposed to use, not just as a garnish) whether the main course is meat, cheese, fish, beans or vegetables. Greeks add it everywhere. Apart from the fact that it's a source of vitamin C, which is also an antioxidant, vitamin C also increases iron absorption when consumed with foods rich in iron such as meat and beans.

Oregano
Oregano is added to meat, salads, potatoes, bread, sauces, marinades and salad dressings. It is an excellent source of antioxidants and it prevents the development of heterocyclic amines, substances present in cooked meat that may increase the risk of cancer; rubbing meat with oregano before grilling can have a protective effect.

For recipes and more ways to Eat Like a Greek visit olivetomato.com