A few years ago, a photograph of a notorious mafia member hung in the office of the Hellenic Coast Guard Security Department. Next to it was a phrase that had often been cited at the time: “The gun trade is dead and the drugs trade has become very dangerous. The easiest money is now in trade of humans.”

The cynical confession captures three major truths, one of the officers in the department told HuffPost Greece: the policies and measures currently in place against human trafficking are insufficient; the profits are bigger than ever; and the networks involved now constitute a major part of what we call organized crime.

The drowning deaths of thousands of migrants in the Mediterranean over the past months have searingly illustrated the inability of the European community to demonstrate solidarity between member states and show a commitment to humanitarianism in the face of desperate people arriving in its backyard. 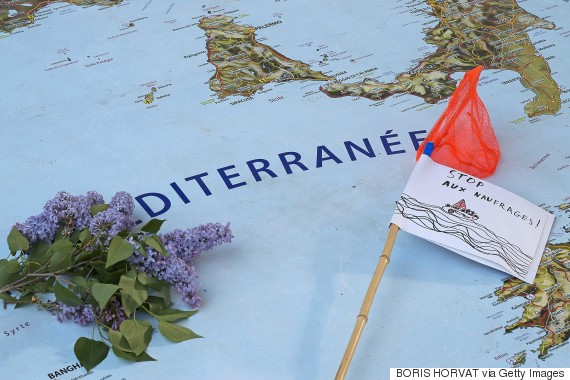 Hundreds of people assemble around a map of the Mediterranean Sea on April 23, 2015 in Marseille, protesting against European immigration politics. (BORIS HORVAT/AFP/Getty Images)

According to the International Organization of Migration (IOM), we are currently witnessing the biggest migration since the Second World War. The number of people who have abandoned their countries has risen to more than 16 million globally, while almost 33 million people have been forced into internal migration.

Over the past year and a half, Greece and Italy, two countries considered gates to the European Union, have seen an unprecedented increase in the number of migrants arriving on their coasts. Greece and Italy, by virtue of their geographic position, bear much of the burden of receiving migrants trying to reach Europe via Turkey and North Africa. The migration flows towards the Aegean Sea and the Central Mediterranean are the highest that have been recorded in recent memory, according to the Greek coast guard and Europe's border control agency Frontex.

More than 34,000 migrants entered Greece illegally by sea in 2014, compared to just 9,357 in 2013, according to the Hellenic Coast Guard. The 265 percent increase has impacted four islands in particular: Lesbos, Samos, Chios and Leros. Last year alone, their coastal authorities tracked down 27,378 migrants. The islands' capacity to take in migrants has been severely overstretched.

Many say that number may continue to rise. Officials in Greece project the arrival of up to 100,000 migrants in 2015. Current trends confirm these calculations: during the first quarter of 2015, more than 10,000 migrants arrived in the country, the head of the Greek office of the IOM told HuffPost. These high numbers are unusual, since the primary season for migrant activity is usually from June to November.

Italy, too, receives large numbers of foreigners; at least 18,000 migrants arrived in the country in the first quarter of 2015. 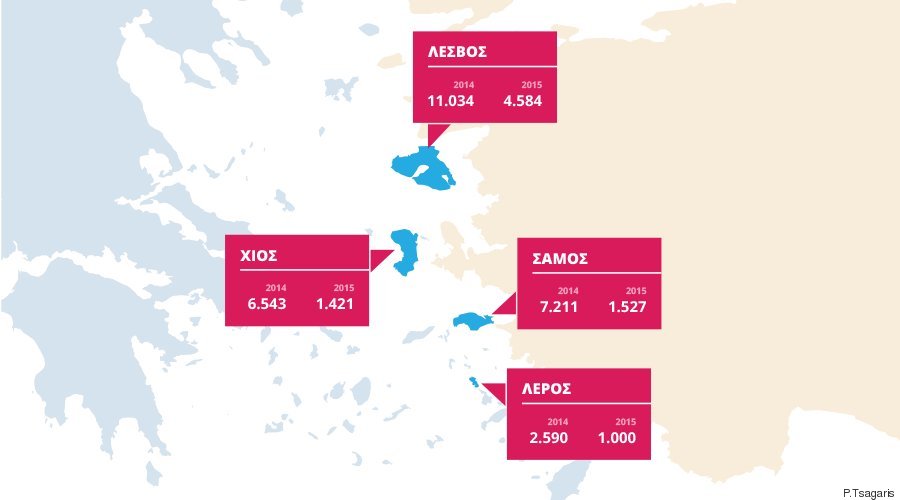 Deadly Voyages Across The Mediterranean

The rising number of deaths recorded in the Mediterranean Sea raises questions and concern about the way the crisis ought to be handled. The termination of Italy's Mare Nostrum rescue mission, which patrolled the Mediterranean, is thought to be a major factor in the increase in shipwrecks and the rise of the number of migrants who perish at sea.

It is now estimated that for every 1,000 migrants that are known to have crossed the Mediterranean, more than 46 lose their lives in shipwrecks. The actual number might even be higher. 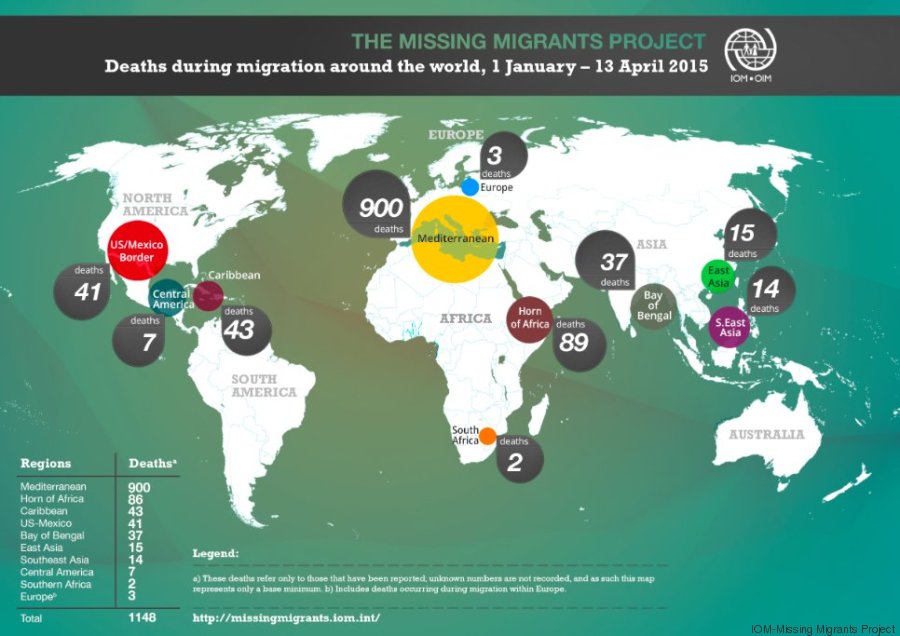 According to Greek coast guard officers, there are many reasons for the rising number of fatalities.

The civil war in Syria continues unabated in its fifth year, with a devastating cost in human lives, unspeakable pain and horror for non-combatants.

Many Syrians found refuge in surrounding countries like Turkey -- which hosts 1.6 million Syrian refugees-- and Egypt, Lebanon and Jordan. But conditions for many refugees in those countries have become more difficult in recent months. Egypt has altered its migrant policy, including by imposing visa obligations and revoking residence permits. Similar policies have been implemented recently in Lebanon and Jordan. New migrant policies in Iran have additionally led many Afghans who had found refuge in the neighboring country to seek their fortunes in Europe.

According to available statistics, 65 percent of those who have illegally entered Greece in the past months are Syrian war refugees. 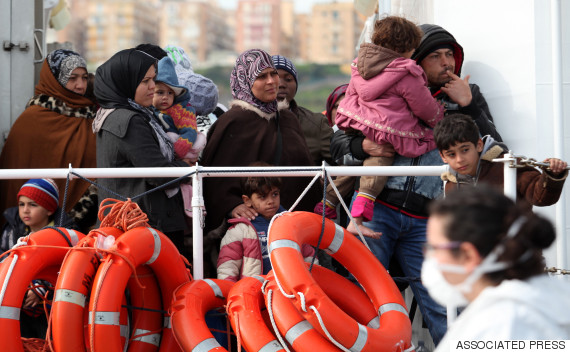 The Role of Organized Crime

When talking about organized crime and migrant smuggling networks, the phenomenon does not start or end on the coasts of Turkey or African countries. This is a “chain” of thousands of people covering massive swathes of territory. It starts with the first smuggler in some distant country who offers to help the migrant reach Turkey illegally; another who will take on the transit to Greece or Italy; and another who will arrange transportation to the desired destination, usually in northern Europe.

Conflict and war, especially in the Middle East, have spiked demand and many migrant smugglers have seen their profits dramatically increase. “We are literally talking about a... dance of hundreds of millions of euros on a yearly basis," one coast guard officer told HuffPost Greece. 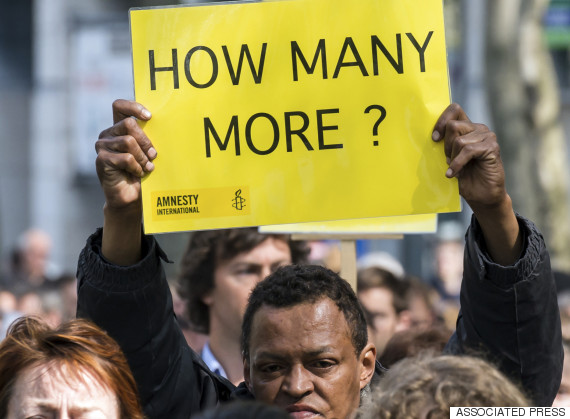 A protestor holds up a sign during a demonstration outside of an emergency EU summit in Brussels on Thursday, April 23, 2015. (AP Photo/Geert Vanden Wijngaert)

The smuggling networks use all means available to increase profit and decrease threats... for themselves, not for the migrants.

Until the recent spike in crossings, the most common transportation method for migrants traveling from Turkey to Greece was to load men, women and children in a children's inflatable raft, without additional security measures or supervision. Migrants were given instructions to puncture the plastic upon arrival at the Greek coast, so that a mission tracking down migrants would convert to a search-and-rescue mission.

At other times, smugglers have given migrants a small boat or a rowboat, and even an accompanying attendant -- usually a minor. The cost per person then rises to 2,000 or 3,000 Euros ($2,144-$3,216). The “ticket” price changes depend on the degree of risk, meaning the method of transportation, the offer of an attendant or not, the number of passengers, the distance between the Turkish and Greek coasts and weather conditions on the day of travel.

Recently, however, there are signs that the smugglers' methods may have shifted, as many migrants are so desperate they are willing to pay no matter what.

Cargo vessels have become a common method of transport, according to the European Commission. Since September 2014, 12 incidents with cargo vessels have been reported, with seven occurring in December 2014 alone. The trips, the European Commission says, cost between $5,000 and $7500 per person -- indicative of the massive potential profits involved in the enterprise.

Greek coast guard officers told HuffPost that they can't say with certainty that cargo vessels are the new method used by the networks, but they acknowledge it is a prevailing tendency. “The major problem on these occasions -- and the smugglers know it very well -- is that the prosecuting authorities can’t stop and check a cargo ship or a big fishing ship unless there is a strong reason, as defined by international regulations," one of the officers said. "There are rules allowing the free navigation, ships always have a flag of a foreign country and things are even more difficult when they are in international waters.”

But beyond this apparent trend, the smugglers also appear to be borrowing methods used mainly by large networks of trade and trafficking of drugs.

“We see that there are cargo ships functioning as a mother ship, as is true of cocaine and heroin trafficking,” the Coast Guard officer told HuffPost Greece. "There are a large number of migrants on board the ship and afterward, in the middle of the open sea, the migrants are divided as cargo into smaller boats. Whether they want to, or not.”

This article was originally posted on HuffPost Greece and was translated into English. It was adapted for an American audience.