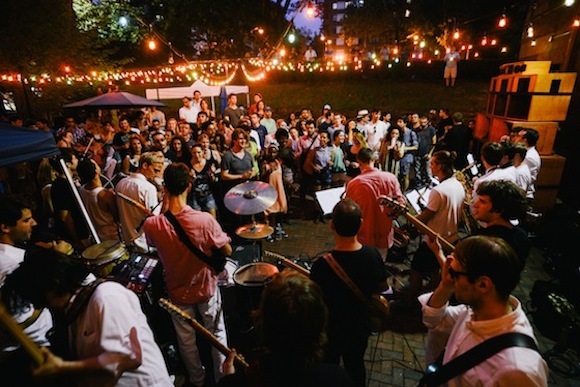 Three young arts professionals came together last year to form a production and consulting company, Medium Rare. In their first year, they've worked with some stand out talent such as Antibalas, The Stepkids, Xenia Rubinos, and Chicha Libre.

Analuz Vizarretea, Melody Rabe, and Jessica Olsen met in 2012 while working the summer concert season at The Lincoln Center in New York. What better training ground is there than the country's leading performing arts program.

Vizarretea remembers that summer being a very ambitious season with more than 100 performers in just six weeks. It was just the right boot camp to help them become movers and shakers in the big city.

After that season, Vizarretea was approached by the Nuyorican Poets Café to consult on new programming for the venue. They came together and started working on their new company's first events.

Programming at the cafe inspired a monthly party showcasing emerging cultural talent in different venues around New York, such as the Bowery Electric, Public Assembly, Little Field, and the Mercury Lounge.

Medium Rare does what it can to add a more human approach to presenting concerts. It can be frustrating for an artist to show up at the venue and never meet the person that booked them. They take the time to introduce different artists to each other, review and consult on press kits, and find new opportunities for artists willing to develop.

"We are building a family of artists that work together," Vizarretea said.

Medium Rare also produces the annual Music Frees All festival, featuring 10 bands at various venues and serves as a fundraiser for hip hop producer Scotty Hard, who was in a car accident years ago and is still recovering.

Coming up next, Medium Rare is presenting a Silent Disco during the annual CMJ in New York.