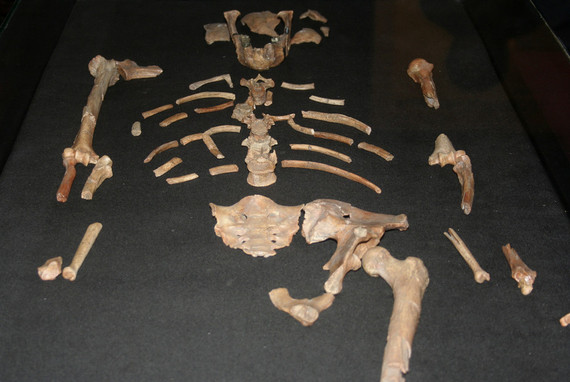 "Lucy, you want to see Lucy?" young, would-be tour guides prompt in Ethiopia's capital, Addis Ababa. Lucy stars in tourist brochures as one of the East African country's great attractions. She also appears in the cultural history collage at the entrance of the Ethiopian National Museum. Ethiopians are clearly proud of Lucy, a hominin specimen of special renown, a cultural heritage attraction.

You meet Lucy, or Dinknesh, meaning "you are marvellous" in Amharic, in the lobby of the Ethiopian National Museum. "Hi, I'm Lucy," greets a sketch of Australopithecus afarensis. "I am almost 3.2 million years old, but am walking fully upright." It goes on to suggest: "Please meet my world-famous ancestors and descendants, all from Ethiopia," prompting a visit to the palaeoanthropological exhibit in the basement.

This is striking. Lucy, an ape-like creature, becomes a human-like cultural ambassador for African archaeological heritage in Ethiopia. What does it mean to humanise the remains of our ape ancestors? What kinds of things are they made to say about the countries that display them? And what do they say about Africa as a place of scientific "discovery"?

One reason why fossil remains are humanised is because it helps make confusing biological leftovers sensible. It also simplifies complicated scientific findings for the media. But this simplification of science also creates problems. These stories often hinge on the idea of "discovery", a word linked to colonial exploitation, and recycle stereotypes about who is allowed to produce, and what counts as, new scientific knowledge.

Let's take Lucy. Popular media accounts state that she was "discovered" by Donald Johanson in Hadar, in Ethiopia's Afar Valley, in 1974. He happened upon the remains by chance while walking back to his car near an ongoing archaeological dig. The team celebrated the find that night, playing music by the Beatles, which led to the specimen being named Lucy, after the song Lucy in the Sky with Diamonds.

Told differently, we could say, the remains of a female ape-like hominin were found in a developing African country by a highly educated man from America. This white man is portrayed as having the strength, expertise and skill to recover precious female fossil remains in black Africa. He takes credit for digging up, identifying and explaining its importance, as an Indiana Jones-like hero of science.

This is a common way of explaining how hominin fossils are recovered in Africa. Think about how Homo naledi was found northwest of Johannesburg, South Africa, and identified, and how Professor Lee Berger became the dominant voice in explaining its scientific importance. In reality, archaeology does not work like this. Nick Shepherd's article, "When the Hand that Holds the Trowel is Black...", shows that simple stories like these actively erase the black labour and nous that go into recovering such finds.

Story of our ancestors

The palaeontology exhibition in Ethiopia's National Museum uses Lucy's remains to make claims about shifts in deep time. One panel declares, "These remains tell us a long story of great transformation in landscapes, living beings and techniques. They tell us the long story of our ancestors."

Referencing human and spiritual predecessors, ancestors are a potent explanatory idiom in Africa. My original research shows, for example, how "ancestors" informed the heritage claims made by Freedom Park in South Africa.

Exhibition panels also flag Ethiopia as a special site of palaeoarchaeological remains. It has "the most complete and richest record of human ancestors and with the longest record of stone and tool making". Indeed, one panel declares, "the oldest known remains of Homo sapiens, our very species, were discovered in Ethiopia around 200,000 years ago".

Ethiopia makes a distinctive contribution to the African story of human evolution. "Hominid species are known only in Africa and nowhere else on earth," a panel explains. Ethiopian fossils, however, complete the African story of human evolution. "Early hominids have been found in several African countries," its says. "Together with Ethiopian fossils [they] contribute to a general understanding of evolution in Africa."

Surprisingly, South African heritage sites make similar claims. Maropeng and the Sterkfontein Caves, for example, are described as "the oldest and most continuous palaeontological dig in the world". Known as the "Cradle of Humankind World Heritage Site", it is "widely recognised as the place from which all of humankind originated". Visitors could take comfort in the company slogan, "Welcome Home".

This was the site of major shifts in human evolution. It is the place where "the best evidence [has been unearthed] of the complex journey which our species has taken to make us what we are". "Our ancestors were able to use and control fire at least one million years ago in the Cradle of Humankind," the website states. It is a special place in Africa, "the birthplace of humankind ... where our collective umbilical cord lies buried".

It is not surprising these countries appear to be making similar, competing claims. African fossils are valuable remains, and much is at stake. They reference problematic ways of talking about archaeology as a science of "discovery" in Africa.

The fossils serve as evidence distinguishing countries as important sites of archaeological research. They also allow countries to make claims to and about Africa, and the idea of Africa as the cradle of humankind. And finally, they have the potential to attract, entertain and educate visiting tourists, and generate revenue in the process.