There may be no better way of getting to know someone than over a homecooked meal.

Canada's Ahmadiyya Muslim community launched the #MeetAMuslimFamily campaign on March 1 to bring neighbors together in the intimate space of the home. For two weeks, Muslim families are being encouraged to invite non-Muslim neighbors into their homes for a meal and conversation to "bridge the gaps and remove misconceptions regarding Islam and Muslims."

This isn't the first time the Ahmadiyya Muslim community has publicized such an event, organizer Safwan Choudhry told CBC News, but this year's campaign comes at a particularly crucial time.

In October 2014, a terror attack shook many Canadians when Zehaf-Bibeau, a recent Muslim convert, shot and killed a soldier standing guard at the country's war memorial and later attempted to attack the Canadian parliament.

In February the Somali terror group Al Shabab listed the West Edmonton Mall in Alberta, Canada as a possible target, though local police assured that there was "no imminent threat."

Such incidents, Choudhry suggested, have contributed to a climate of discrimination toward many Canadian Muslims. In response, a mosque in east Edmonton opened its doors on Sunday to invite anyone interested in learning more about the faith to pay them a visit.

“The purpose of this open house is to come and see Muslims are like human beings,” Mohyuddin Mirza, the outreach director of the Ahmadiyya Muslim Community of Edmonton, told Global News. "We just want to promote the idea we are living in your community, come and see us, you won’t see any violence.”

The same idea applies to the #MeetAMuslimFamily campaign, Choudhry said.

"We believe that the best way to dispel that is to really show Canadian families who we are."

Marilyn Iafrate, a city councilor in Vaughan, Canada, visited the Choudhry home with her daughter on Sunday for a meal.

"Being together and sharing common values... this is a moment where we can experience and solidify what we know," Iafrate told CTV News. 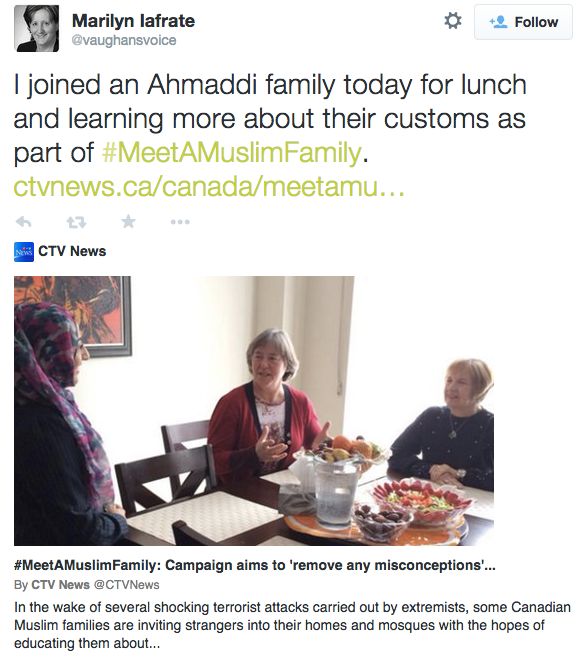