"It started when I was ten," says Ji Weiyu when I ask him how he came to photography. "My uncle had a camera, I thought this toy was very fun." Two decades later, the Shanghai-born artist is one half of Birdhead -- which he founded in 2004 with Song Tao -- and the photographic duo is quickly garnering international attention for their diaristic practice. Their work was presented in the Arsenale during the last Venice Biennale, and there are rumors of a major museum show in New York next summer. 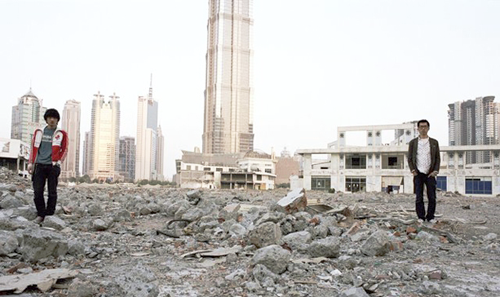 For their first solo in Britain at London's Paradise Row, the duo have wallpapered the gallery with dozens of black and white snapshots, conjuring up a dizzying mosaic of the everyday. In the pictures, people come and go, laugh, eat, smoke, dress up for Halloween, dance on New Year's Eve, or just pass by in the streets. There are close-ups of foodstuffs, architecture, plants, body parts --all these insignificant occurrences that don't mean much individually but together weave the very fabric of existence. The artists themselves crop up here and there, as if to reassert their place in this pictorial chaos -- and their role as the red thread making sense of it all.

The images were all shot in Shanghai but they could well have been taken in any Chinese metropolis. The star of the country's booming economy is barely recognizable, relegated to a stage for a human comedy that has been carrying on for millennia, little affected by political and economic contingencies. "Love, hate, happy things, sad things," enumerates Ji Weiyu. For Paradise Row director Nick Hackworth, Birdhead's work is a "fatalistic joke on what changes and what doesn't change," played out on the backdrop of a city that has come to signify urban transformation. Tellingly, the duo has chosen to open the exhibition with a poem by classical poet Xin Qiji, spelt out with characters photographed on shop fronts and presented on a raised pedestal as if in a temple. "Youth does not know how sorrow tastes," mused Xin Qiji. "But now I know all right how sorrow tastes. And when about to mention it, I just say steady."

Birdhead's stream-of-consciousness is a refreshing antidote to the grinning faces, endless Mao Zedongs and cultural clichés that have been crowding much of contemporary art coming out from China in the last few years. Redolent of Wolfgand Tillmans' and Nan Goldin's, Birdhead's art is neither a celebration of one of the world's fastest growing economies, or a condemnation of its dubious human rights record. It unravels like a promenade, skirting these issues without ever really addressing them. "Every day we need something to do," says Ji Weiyu, "so we take pictures."

From Louis Vuitton to Marc Jacobs: The Evolution of a Legendary Label