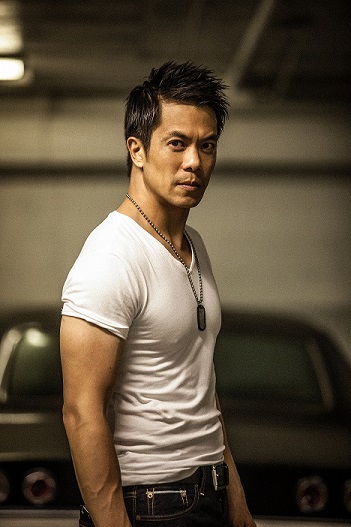 Byron Mann is the new guy on the set of AMC's Hell on Wheels. Byron also stars in the Lionsgate actioner ABSOLUTION opposite Steven Seagal which was just released on DVD/Bluray. Byron also babysits my hatchlings, cleans my house, recites every line from my favorite 1983 mini-series V and reads me bedtime stories. Hey, a girl can dream!

You play Chang in the fifth season of AMC's Hell on Wheels. What's it like being the 'newbie' on set? Who was the first actor you met from the series? How'd you feel your first day on the set of Hell on Wheels?

The first actor I met on Hell on Wheels was Tim Guinee, who plays 'Collis Huntington' this season. He called my hotel room the second day I arrived in Calgary (where the series is shot) and actually woke up me from a nap. I had just flown in from Hong Kong the day before, and was severely jetlagged. I answered the call in a haze. He introduced himself to me, and wanted to invite me out to dinner. He told me he felt weird for actors to just land in a foreign place not knowing a single soul, so he wanted to break that pattern by cold calling other cast members like myself and inviting them to dinner. I thought that was the most gracious act any cast member has ever done for me and I'll always remember it.

I'd never seen this show before, so I didn't really have any expectations. However, production scheduled the most difficult day of the episode to be shot on the first day. On my first day, I had to recite pages and pages of monologue, some of which included passages from King Lear, and at the same time play poker with Anson Mount (who plays Cullen Bohannon) and Reg Rogers (who plays Jim Strobridge). Problem is: I've never played poker before, and trying to remember the rules of the game, my long Shakespearean monologue, and establishing my character all on the first shoot day was pretty challenging, to say the least.

Well, they're both wrapped up in the same story. I was filming this movie called The Man with the Iron Fists near Shanghai, China. During the shoot, most of the crew had fallen ill to a vicious virus. I was one of the last men standing. But one day, I too caught the virus, and it made me so sick and weak, I could hardly get out of bed. I had a high fever and hadn't eaten all day. I had to literally drag myself out of bed to the hotel restaurant to get some food in my stomach. I was so weak it took me about 30 minutes to walk from my hotel room to the hotel restaurant, which was just down the hall from my room. Now the next day, I was scheduled to film the most important scene in the movie, where I had to give an impassioned speech to rally the troops. It was pages of monologue (again!) and the speech had to have a lot of energy and passion to it. But I was so weak, I could hardly speak. I was this close to calling the producers to say I can't show up. But I knew the scene involved hundreds of actors and extras, so doing so would cause a logistical nightmare.

So I toughed it out... The next morning, I dragged myself out of bed, popped some aspirin and got to set. I drank gallons of hot water, hoping to flush the evil virus out of my system. I mustered up whatever energy I had and gave it my all. Funny thing was: the more I did the scene, the stronger I felt. I kept telling the director (RZA) I had a high fever, but he kept going for more takes. By the end of the day, I was spent. Interestingly, I was told that that scene turned out to be one of the strongest in the film.

I keep it simple. No diets, no nothing. I eat as much vegetables and fruits as I can, and stay away from fried food, processed food and alcohol. In the gym, I do 30 minutes of cardio and 30 minutes of weights. And wrap up with 15 minutes of stretching. That's it.

What was the saddest moment of your life?

When one of my relationships ended.

Have you started work yet on the film The Big Short? How'd Brad Pitt, Christian Bale, Ryan Gosling and Steve Carell get lucky enough to be in a film with you?!

I had to Google these actors to find out who they were (just kidding). In the audition, I worked with the director Adam MacKay (Anchorman) and before I started doing the scene, he asked if I wanted to eat some chips -- during the scene. I said sure, why not. So, he passed me a bag of chips and I did my scene while munching away at them. Turned out, that's the way he envisioned the scene, my character stuffing himself with food while interacting with Steve Carell's character. All I can tell you is on the day of our shoot, I ate an obscene amount of food.

So you know @TimGuinee ? Spill the beans.

How do you feel about Asian representation in TV and Film today? I read somewhere that the % of Asians in TV/Film is very low. Why do you think this is?

I think that's because we're all silent ninjas. Seriously, I think it has to do with writers and producers --- people who are writing the roles. Most of them are not Asians, so therefore, most of the characters written are not Asians. Having said that though, I have noticed that things are changing slightly with the emergence of the China market. 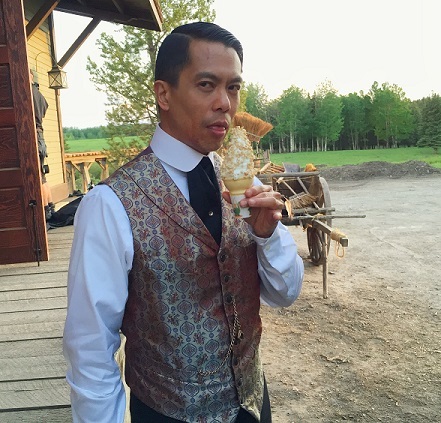 Why did you attend an all boys' school? What was it like?

Hong Kong was an English colony, so most of the better schools are either all boys' or all girls' schools, patterned after the English educational system. In that system, there is something called "hazing" which means older boys can bully younger boys and get away with it. A rite of passage, if you will. So, when I was 13 years-old, I was dragged by a bunch of older boys into the "boys scout" room, which everyone knew was the "evil" room. They took our pants off and dripped wax onto our privates. And then they'd kick us out. I know it sounds horrific. Like this could be a lawsuit if this happened in the U.S. But that was the order of the day back then. It was horrific then, but now, I look back with pride that I made it out of the "boys scout" room alive.

Tell us about your family history.

Funny you asked. My ancestors are Cantonese, and they are from a district called Taishan. Most of the railroad workers who worked on the Central Pacific railroad (from San Francisco) were from Taishan. Isn't it a wonderful coincidence that I am now filming their story on Hell on Wheels?!

All the time. Jellyfish ain't that exotic where I come from :-)

What are some of your pet peeves?

Incompetence in others. I don't expect everyone to be a genius, but people should follow through with what they say they will do. And dishonesty. That's a deal-breaker.

Do you have a special method for memorizing your lines?

I only read scripts on paper. I learn my lines usually by doing something physical. Like driving a car or washing dishes. If I'm really in a time crunch, I lock myself in my bathroom and learn my lines inside there. Don't ask me why, but it works.

Did you grow up religious? What about now?

Yes, I grew up in a Christian family. I still subscribe to the faith today. I find that most people become religious when they find out they have cancer. Just an observation.

The season premiere of Hell on Wheels airs Saturday, July 18th. Check out the latest news on my current/upcoming projects via Twitter: @Byron_Mann