On Tuesday night, Filip Noterdaeme was seated at a small, white wooden stand on Chelsea's High Line, a sky-level park winding between blue chip art galleries and Tommy Hilfiger bilboards. Noterdaeme sat in a straw fedora and plaid bow-tie, donning a penciled on pencil moustache and glasses that he later revealed were fake. With one hand he loosely gripped a fake cigarette on a holder, which he theatrically puffed on from time to time, the other was looped around a leash attached to a taxidermy coyote named Florence, who served as Noterdaeme's PR representative, among other things. 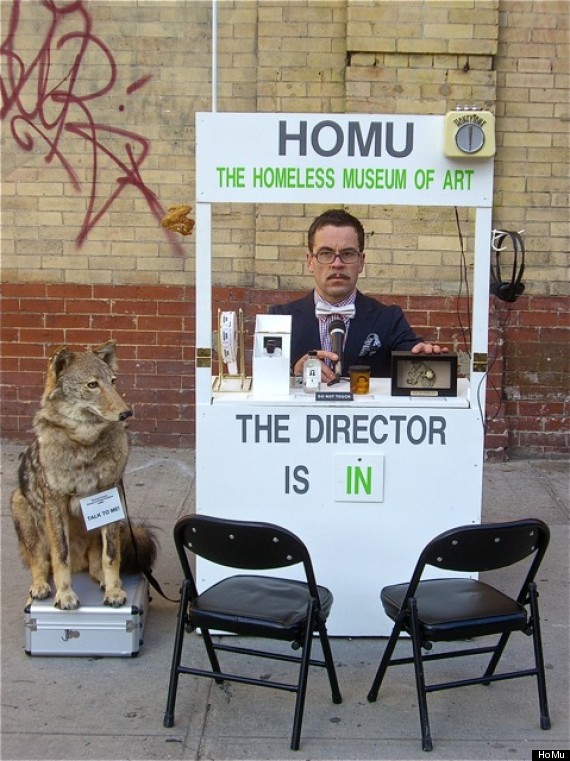 The Homeless Museum of Art looked more like a lemonade stand or puppet theater than a museum. There wasn't much art around, save for a few objects like "Egg on Schiele," in which a little egg was pasted atop a miniature framed Egon Schiele painting. As waited for my turn to meet the director someone came up and whispered, "Who is this guy? Is he a psychic?" I responded hyper-seriously for my own amusement: "No, he is a legendary collector and museum director," mimicking the manner I had heard him introduce himself.

Filip Noterdaeme, a Brussels-born artist and teacher, created HoMu in 2002 as a performance prank that simultaneously mocked New York culture and was an embarrassment to New York culture, or so at least the paranoid director predicted. Never having a fixed location -- it is homeless after all -- HoMu has had exhibitions on the Highline, in Noterdaeme's Brooklyn apartment, between the New Museum and a homeless shelter, with their next destination being Times Square. In 2006 the museum expanded with the "revolutionary architectural concept" of the Chicken Wing, a real chicken wing that "dramatically enhances the presentation of the Museum's dynamic and evolving collection and provides a truly organic space for temporary exhibits." HoMu perfectly captures the silly architecture that constructs the very serious institution that is the museum. But it isn't all a joke. 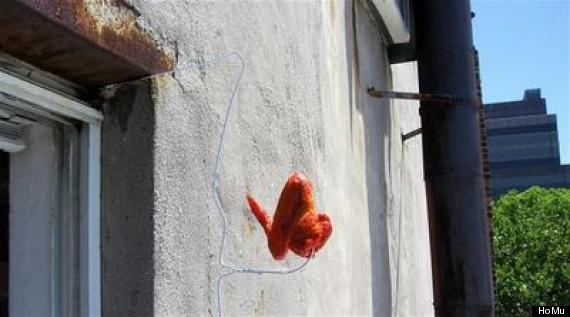 Noterdaeme assumes an alter ego as HoMu's eccentric director, part uppity art insider, part illiterate madman, part perceptive shaman. Not sure whether to expect a performance or an honest conversation, I grew anxious waiting to enter the museum (ie. sit in the little, black folding chair.) On the one hand, I knew it was a sort of prank. (But who was being pranked? Not me I hope!) On the other hand Noterdaeme had described his work as a kind of therapy, a way of building bridges between his visitors and himself in which both became vulnerable. He revealed the artifice of his character without hesitation — "I could do without this fake cigarette or these glasses... I have perfect vision." He also readily expresses his insecurities regarding his museum — "It's hard to know if I am prodding... I don't want to be annoying." It is hard to tell where Noterdaeme the artist ends and the director begins, but after speaking to him for a while I stopped caring.

Noterdaem artist and Noterdaem director occupy the same body, sometimes cohabiting and sometimes not. I was surprised at the way a similar break between my mythologized self and actual self emerged in my conversation with Noterdaeme as well. His questions were as piercing as his unrelenting gaze: "What does society expect of art?" "Why do you write?" "Is it ever possible to get a true, pure account of a work of art?" "Do you agree with Truman Capote when he said: 'When God hands you a gift, he also hands you a whip; and the whip is intended for self-flagellation solely'?" The last question, it should be noted, included a quote fed to Noterdaeme by Florence the dead coyote/PR representative, who often feeds Noterdaeme dates and quotes. Noterdaeme himself, he insists, is illiterate, a character choice simultaneously comforting and insulting. I wish the professor would not have to feign illiteracy to gain my trust, but I must admit it helped even in its obvious falsity.

I was constantly calculating my comfort level as it swung between extremes; on the one hand I felt nurtured by Noterdaem's inquisitive care. Yet I was uncomfortable in my own skin as I barely recognized some of the answers I stammered. Homelessness had invaded our bodies as two strangers engaged to take a chance on each other. In an interview with the New York Times Noterdaeme said: "As an artist I don’t seek comfort; I seek discomfort." From my interaction with Noterdaem it seems comfort plays more of a role than he suggests. It was becoming difficult to maintain a separation between truth-seeking therapy and myth-making performance, comfort and discomfort, home and homelessness.

Sitting in a museum with no walls, with no obvious artworks in sight, I started to see the art everywhere. Noterdaem read my necklace, my guarded expression, my frantic mumblings as brush strokes, extracting meaning and pushing onward. The director then gathered these clues into a narrative myth of me, a semi-cohesive mix of performance and truth that was not all that unlike his own. We sat there talking, me as myself while sometimes letting fiction slip in, him as a character who sometimes broke character. He was the art and so was I. "Invent the world! Invent reality!" the director quoted Florence the coyote quoted Nabokov as saying.

When you leave the museum Noterdaem hands you a ticket and bids you farewell. "This is a museum without walls," he explains. "Wherever you go you are my guest. If you wish to get rid of the ticket, obliterate it any way you choose, preferable in the most dramatic way possible. Or you can give it away... or hold on to it." As I leave my chair, stumbling to take a few last notes, Noterdaem begins his performance for the next visitor. A new stranger approaches me and whispers, "Is this guy a psychic or something?" This time I do not answer so brusquely.