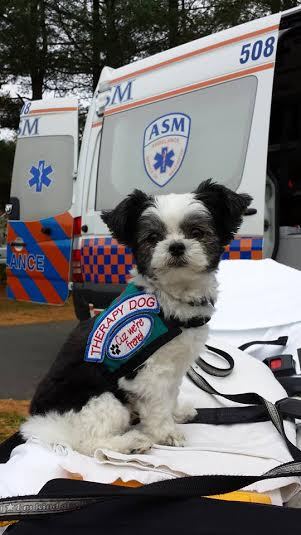 Meet Gizmo, a 3.5-pound wonderdoglet on a mission to change the world one doggy hug at a time. I connected with Jen Adams (Gizmo's human) while getting the word out about my picture book Rumplepimple. We appeared on the same episode of The Pet Radio Show, and as I learned more, I began to wonder how such a wee creature could make such a huge difference.

The "Gizmo's Frens" Facebook page has almost 80,000 followers. Why do you think he has become so popular?

Truthfully, I am shocked at the size and diversity of Gizmo's following. They come from all walks of life, from all over the world, and they are all there to share a sense of kindness and good will. Maybe people first respond to the same thing I did: his lil' face and his excellent ears. I think when they learn what he's about and see his message, they want to be a part of making a positive difference.

You two do amazing work in all sorts of venues. Tell us how you got started.

Before Gizmo found me, I lost the love of my life suddenly. Gizmo, with his gentle, loving nature, facilitated a real transformation for me. I went from a grieving, lost soul who was full of self-pity to having this amazing little creature whom I knew could change lives other than my own. Gizmo forced me to step outside of myself and help others, and, in so doing, he channeled healing in me.

During the very early stages of our journey, Gizmo exhibited a keen sense of people's emotions. He would seek out people who were having a tough time, and climb into their laps or lie beside them, as if to say, "Listen. I see you are hurting, and I will help you, ok? Cuz we're frens."

That being said, I just... began! Wherever there were folks who needed help in our community or people who were doing kind things, I showed up with the Giz. When people would say, "Who's that dog?" I would just say, "Oh wow, you don't know Gizmo? He's here to help!" In acting like he was a public figure, and believing that he was, so he became!

Gizmo became a certified therapy dog with Paws for Friendship, Inc. when he was two years old. We started doing visits at an assisted living facility, and it just grew from there. Today we visit hospitals, schools, veterans, nursing homes, juvenile facilities, group homes, mentoring programs, and more. We even traveled to Wisconsin when a mentoring program for teen girls asked if Gizmo could come help them deliver Christmas cookies to veterans. I figured, "Why not?" So away we went!

Gizmo also visits Hartford Public Library and its branch libraries as a Paws to Read certified reading assistance dog. Being a special education teacher, I wanted to help kids gain confidence in reading.

In observing Gizmo's interactions with people in need at the facilities where we visit, I realized that, in addition to animal assisted therapy, crisis counseling is another passion I never knew I had! So last September I started my Master's in Human Service/Counseling - Crisis Response and Trauma. Gizmo became the first known Community Emergency Response Team therapy dog in Connecticut. He went through the training with me, and is now available to visit storm shelters, sit with families during search and rescue situations, etc. when CERT is activated. Most recently, Gizmo passed his field evaluation for an amazing group called K9 First Responders (K9FR), a Critical Incident Mental Health Support organization. K9FR Teams bridge the gap between a traumatic event and the connection to mental health services. The goal is to jump-start the process of restoring a person's emotional and cognitive equilibrium through the animal/human bond.

Gizmo visited the state house in June! Tell us a bit about how that happened.

I donated a therapy visit with Gizmo to a charity auction. The woman who won the visit is a staffer for a legislator. She asked if Gizmo could come visit the House of Reps and Senate. We were humbled to oblige, and we were welcomed so warmly by all the Reps and Senators! As the universe would have it, our visit occurred on the day before Senate was slated to vote on a bill that had just passed through the House of Reps that would make therapy dogs more accessible to children in crisis in Connecticut. The following day the Senate voted unanimously to make the bill a law!

Why are you so committed to making a difference?

I decided life is a choice. We can live in misery and bitterness over crappy stuff, or we can focus on creating happy stuff. Throughout this journey, I have discovered an amazing relationship with God (or a Higher Power, the Universe, whatever anyone chooses to call it) - not so much in a religious sense, but in a spiritual sense. I believe it's what He wants for all of us... to help and support each other however we can, and to love. Truly, what other reason is there for being here?

The inspiration is simply what he has taught me through his encounters with people in need, including myself. All of his posts about forgiveness, hope, faith, love, kindness, living each day to the fullest, etc. came from his heart and transformed my life, and hopefully maybe the lives of others.

Do you think Gizmo knows he is a hero and a celebrity? He looks pretty humble.

Gizmo once sought out a random woman. He sat at her feet and looked up at her. She introduced herself as an animal communicator! She said Gizmo told her he knows he is important, but he does not know why. I think I will keep it that way.