"How many crows you see today?" asks Guy's coworker.

"I saw six," he replies, looking up into the sky to see if he can spot a seventh. In Marin County, the crows are big and coal-black, their wings as shiny as charred wood.

A park surrounds the municipal pool where Guy works, so it's easy for him to take his daily count of his favorite bird while he works site maintenance. Guy does all the stuff here that the full-timers rarely have time to do.

Today he is cleaning the outdoor chairs that were used for a wedding that weekend. He methodically hoses down each chair, pausing to scrape off any wedding cake cemented to them, then drying each with a towel. "I like it here because I'm around people who know me," he says, stacking a few of the cleaned chairs. Guy is developmentally disabled. He has emotional scars from his childhood and autistic like tendencies. He looks like a cross between Ned Beatty and Randy Quaid, with a stocky build and short curly hair. 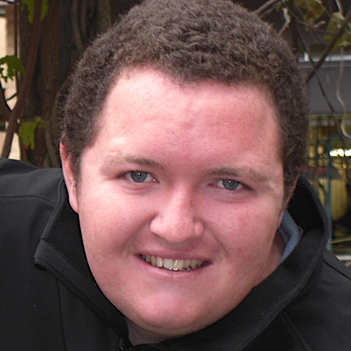 Before he worked here, Guy used to come every day to escape his old group home, which didn't plan activities for the residents. Guy went to a private school for kids with behavior problems, and he didn't have a job. He liked to either chat with the lifeguards or with the firefighters at a nearby fire station. Lisa, the executive director of PDS, kept spotting him swimming there day in and day out and got to know him.

PDS took Guy on as a client. Lisa talked to the pool and they hired Guy. They already knew him very well and it seemed a great fit. Now he works four days a week, for two hours each day. He's enthusiastic and reliable, but his coworker Tom admits that sometimes he "freezes and we have to go out and reboot him." This is usually when he gets hungry. Guy has to make sure he eats a good meal before he starts work or he will lose his energy very fast.

"At my old group home," he says, "If I was still hungry, they would say, 'You've had enough, no more." The food was all frozen or in cans, and Guy didn't know how to prepare it by himself. His housemates were sometimes seen rooting through the trash in the neighborhood to find food. "I didn't have hardly any money," he says. The worst indignity, in his mind, was that they didn't allow him to talk about crows. "This is ridiculous, they'd tell me, 'Don't talk about crows.'"

Now Guy is in a new shared-housing situation that is much better. He's plastered the walls of his room with pictures of ravens and crows. In addition to the birds, he also is fascinated with garbage disposals, stoves, and dishwashers, and no one tells him not to talk about those things now, either.

He also has something else in his life now: spending money. With his paycheck, he likes to go out to eat and order whatever he wants. Lately he's been taking the ferry across the Bay to Fisherman's Wharf. "I get crab dipped in butter," he says, "with garlic."

Guy finished up stacking the chairs and dried his hands off on a towel. In Hindu lore, the crow is a portent, an omen of good things. If you see crow, opportunity is around the corner.

"Seven!" says Guy, pointing up at one perched on a wire. He lets out a sigh of satisfaction and goes inside to clock out.

PDS helps people like Guy obtain and maintain employment in their community. Please help PDS win the JobRaising Challenge by donating to our cause: http://www.crowdrise.com/pacificdiversifiedservices-jr