In the first stop of my leadership profile series, please meet Jon Vein, a collaborative leader.

Jon is unique in attitude and collaborative leadership style. He is a purveyor of pragmatism mixed with passion. 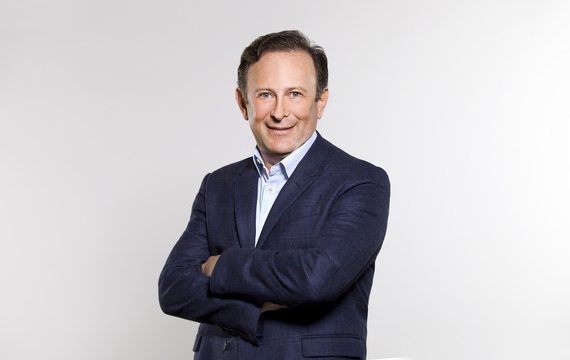 As co-founder and CEO of the high-tech software company MarketShare, Jon believes the most important characteristic a leader can possess is to know what you don't know. From his perspective, it is essential to provide a North Star and then set, a smart, trusted team loose to develop a comprehensive strategy.

His collaborative approach requires self-awareness that many leaders lack. Jon defines it as having the capacity to accurately perceive and adapt to the emotions of his subordinates, while using his own emotions to guide his thinking and overcome challenges.

In all of his pursuits, whether in business or community activities, Jon has always felt called to serve the greater good. His team is inspired to buy into this mission. Together they create and implement concepts and strategies for creating social impact and generating financial prosperity.

As a leader, Jon avoids boxing anyone into one career path. His own started with having a double major in engineering from UC Berkeley, in which he soon discovered after a short stint in the defense industry, that his career trajectory lay elsewhere.

As he described his different roles in a variety of industries, Jon didn't see himself as unique. He believes many individuals can be genuinely extraordinary, if given the opportunity.

Jon pursued a degree in law, not to be a lawyer, but to understand the business of law and as a foundation for public service. He was accepted to Harvard, where he used collaboration as a way to restart their student government.

After graduation, he traveled around Europe. But a well-known attorney with an entertainment law firm he'd worked for tracked him down, and invited Jon to be a partner in a new firm. It was his first job out of law school.

Collaborative leaders display a crucial ingredient stemming from emotional intelligence; understanding the emotional state of others and themselves.

Jon believes his essential business relationships are at the basis of his success. Throughout his diverse career, he has built a strong foundation of interpersonal connections.

He established himself with many entertainment clients, including an animation company, Film Roman. He worked with them daily, forming relationships, as a basis of contextual intelligence among the different departments.

A few keys to creating this collaborative work environment:

His listening skills in all of his relationships, allowed him to understand not only the circumstances of what others stated, but also cued into the feelings behind their words. He understood the emotions to be addressed, not necessarily the words.

In the late 1990's, Michael Ovitz was in the midst of establishing a handful of entertainment companies. Jon met Mr. Ovitz in a negotiation involving his wife, a well-known entertainment executive. Michael and Jon developed a strong personal and professional bond, and in early 2000, Michael offered Jon the position of COO for AMG (Artists Production Group) and APG (Artists Production Group).

Jon once again brought about a new, unexpected opportunity through his emotional acuity to collaborate in relationships. He recognizes the value in listening effectively, anticipating possible issues, and creating a win-win scenario for all parties.

On Being Collaborative: A Leader Must Possess Emotional Intelligence

Leaders who are collaborative and exhibit high emotional intelligence, also possesses self-confidence and are secure in their own skills. In Jon's case, his main motivation is concern for the greater good.

When a leader such as Jon faces his own challenges, he finds the courage to take action and to create change, even in his own approach.

To that end, after helping to orchestrate the sale of AMG, Jon decided his next career move was to be deliberate. A mutual friend suggested he meet Wes Nichols.

They both felt a connection to intelligence in advertising and making a positive impact by taking inefficiency out of the world.

Collaborative Leadership: The Greater Good In An Organization

In 2005, they started Marketshare Inc, as a consultancy, utilizing complex math to connect demand-creating investments, such as advertising, to hard business results, such as sales and profits. They built a team and reputation -- causing them to perform a crucial pivot in their business model to a solution-oriented software company.

When they turned from being a service business to a software-as-a services (SAAS) business, there was a clash of two very different cultures, one focused on client services, the other on scalable technology. As collaborative leaders they continued to empower their staff, resolving issues through communication, and removing those who refused to work as a team.

They now work with some of the biggest brands in the world, including nearly half of the Fortune Top 50 companies, and have eight offices around the world with 500 employees, including fifty PhDs and fifty MBAs.

The ascent to this summit was not always easy, but they were determined to create success based on a culture of teamwork and collaboration. Jon sees those in his organization intentionally cooperating to accomplish a shared outcome of changing the world for the better.

As Marketshare Inc is the leader in their industry, Jon remains acutely aware that the competition is after them and finds it strangely energizing. It inspires him, and his team, to do better. He doesn't take success for granted.

Balancing the need for the "perfect" solution with the need to get to market, he and his business partner strive to live by a quote that is on the wall at FaceBook headquarters, "Done is better than perfect."