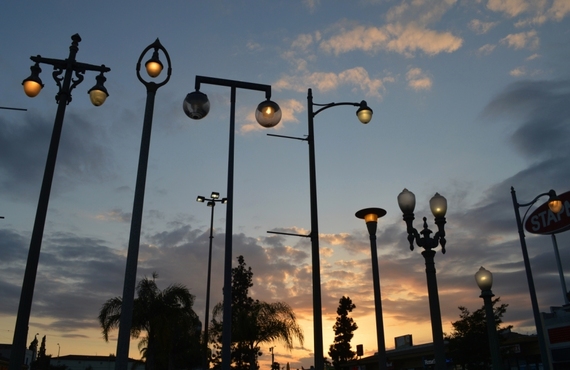 Since opening in 2008, Urban Light has become an unlikely beacon in the City of Angels. The installation has drawn even more interest since creator Chris Burden's recent passing. There's something about its 202 cast iron antique street lamps in front of LACMA that draws us to their neatly aligned rows. Maybe it's that they represent the L.A. we long for in movies, harking back to a semi-mythical gilded age of glamour and elegance -- exactly the same qualities newlyweds look for when seeking wedding photo ops.

But few people realize that 15 years earlier -- when Urban Light was just a gleam in Burden's eye -- Los Angeles welcomed its first street light artwork. Unlike its more orderly cousin, this one captures the real Los Angeles -- messy, diverse, ever-changing. In fact, it literally rose from the ashes of the 1992 Riots. And in true L.A. fashion, you can find it in the parking lot of a shopping center.

Located at the northeast corner of Vermont Avenue and Santa Monica Boulevard, Vermonica is the brainchild of artist Sheila Klein. Looking to create inspiring public art in this burned-out intersection, Klein convinced the Bureau of Street Lighting to donate 25 decommissioned street lamps so she could construct what she calls an "Urban Candelabra." The resulting poles stand side-by-side along a 120-foot medium -- a mishmash of heights and styles from different eras, with the tallest lights in the middle.

This is the point in my essay where I confess to a strange obsession, one I was all too eager to share with Klein. Seems both of us have a thing for street lights. Klein's fixation began after getting to know historian Jim Heimann, who authored a popular book on roadside architecture. My interest was more innate, starting as a 5-year-old. Gazing out the back seat of Mom's station wagon, I didn't just mentally catalog much of the city's 400 types of street lights, I gave them names that now sound like something out of Middle Earth.

Classic teardrop bulbs were called Onsems. Twin-bulbed lamp posts were Frallows. Those round modern globes in Century City? Those were X-I's. All these lights make an appearance in Klein's Candelabra, where, thanks to plaques, I learned their real names are 929 A, Westinghouse California Special, and Century City Davit, respectively.

Taken together, the array of lamps form a fascinating outdoor museum charting the growth of Los Angeles. A number of ornate Art Deco poles date to the 1920s and '30s. As the city grew after World War II, wider boulevards led to taller, more utilitarian poles with cobra head fixtures. Perhaps the most recognizable street light is the concrete-and-steel 812Y, a kind of workhorse equivalent of a black rotary phone. One thing that is missing: signage recognizing the project's owner. A banner with Sheila Klein's name has long since disappeared, merely adding to the mystery of why this quixotic quasi-Menorah exists at all.

So what does Klein think of Urban Light, which has grabbed the street light spotlight while her construct flickers in relative anonymity next to a Payless ShoeSource? The artist is deferential toward Burden's legacy. "We're all mining the same shaft," she says. Both projects encourage Angelenos to find beauty in the seemingly mundane.

For my money, however, Vermonica taps into the city's vein in a way that Urban Light doesn't. Apparently, I'm not alone in that assessment. Designed to last only one year, it just celebrated its 22nd Anniversary. The owner of the shopping center continues to provide electricity and the Bureau of Street Lighting continues to replace burned-out bulbs (although, like many city agencies, they seem severely understaffed in this department). All the while, roadside-art geeks like myself continue to pay steady pilgrimage.

Ironically, Vermonica's endurance seems to be its most lasting statement. It hasn't just outlived its expected lifeline. It has remained the one constant in a shopping center where storefronts change as much as the latest iPhone.

In L.A., some dreams aren't meant to be fleeting.