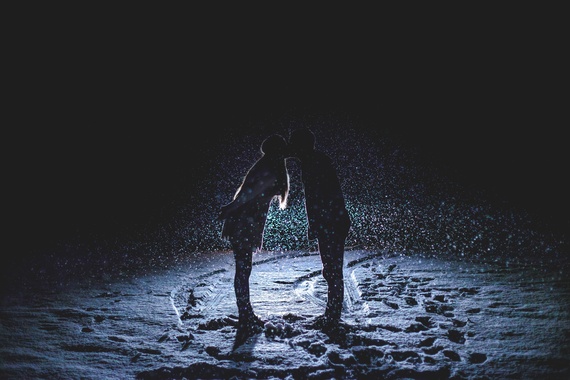 Two people stand on opposite sides of a two-lane highway, separated by a four-foot wide, one-foot high, concrete median.

Cars fly past them at nearly break neck speed, and the noise makes it nearly impossible for either of them to hear one other. But in order for them to truly thrive (not just survive), they need information and resources from each other. The caveat: once they leave their respective spots, they only have one minute to reach each other for the exchange, otherwise all information and resources will be null and void.

One, let's call him "Joe," waves furiously motioning for the other, let's call her "Jenny," to come to his side...ultimately asking her to make 100% of the journey.

She balks, knowing that she's not a great runner (even a bit clumsy) and the chance of her being side-swiped by a quickly moving car are high; not to mention it would probably take her at least a minute just to cross the street, dodging cars all the while.

"No way," she shouts, and motions for him to come over to her side. He looks down at his heavy backpack and realizes he would probably be able to make it 70% of the way before he'd need a break, but the last 30% may be tough given the size of the pack. This would put him squarely in the middle of a moving car.

He shrugs, and shouts back: "It's too heavy. I can't make it all the way over there in less than a minute."

They both stand there for a few moments, somewhat stubbornly, then Jenny waves her hands to snag Joe's attention. "Hey," she calls to him excitedly, "Just meet me halfway, on the median. We will do the exchange there!"

This concept of "Meet Me Halfway" came to me a few weeks ago when I spoke at the RetailROI fundraising event in New York as part of the National Retail Federation Conference. During that event, the keynote speaker, a gentleman by the name of Jimmy Wayne, recounted his story of growing up in the foster care system, making his way to the top of the country music charts, then dedicating his life to raising awareness for foster kids' needs. As part of his mission, in 2010 he walked halfway across the United States in a campaign called (you guessed it) "Meet Me Halfway," then subsequently wrote a NYT bestseller called Walk To Beautiful.

His point with "Meet Me Halfway" was to shed light on the fact that it's not about giving people (in this case, foster care kids who were aging out of the system) handouts, but rather, it's about giving people the opportunity and resources to have a shot at a stable, secure life. In other words: meeting them in the middle and giving them a fair chance to thrive.

I agree whole-heartedly with his sentiment: no one really wants to feel like a charity recipient. Ultimately, it has the averse effect on everyone involved.

How often do we operate like this in life? Meaning, how often do we really ask ourselves the question: "Am I meeting this person or situation halfway, or am I over-giving or under-selling myself?"

Furthermore, if we repeatedly make the effort to visit a friend or family member who lives in a different state, without any gratitude on their part, are we really capable of not being resentful? I'm all for being of service, being a giver, and showing "grace," but at some point - over time - the scales must balance.

So if we use this idea of "Meet Me Halfway" in terms of how we treat our customers, or how we prospect customers, what would change?

Last week, I caught wind that a "competitor" (I use that term loosely) had offered to buy out one of our customer's contracts in order to win the business. They were willing to go 100% to our customers' side of the road, our customer didn't have to budge.

But you know what happened?

We had invested so much time and energy into meeting the customer halfway along the journey thus far, that our customer basically told them to take a hike. We hadn't ever over-offered anything. Nor had we ever asked them to completely come over to our side of the road. With every twist and turn along the way (from prospecting to closing to retaining), we have brought them what they needed and they have brought us what we needed in order to have a successful engagement.

Now, I understand how business works. I understand competition is fierce and that often times in order to "thrive", you believe that first you have to "survive". There is a level of truth to that. But when you're surviving, you don't think about things in terms of the "Meet Me Halfway" principle; you're only thinking about how to get what you need at any cost.

The result can go one of two ways...

#1 - The first outcome is you over-compensate. You don't ask the other person (customer) to budge, you just waltz on over to their side of the road and throw it all-in. While it may seem like you're being generous, it actually makes the customer begin to question your intentions or your even your credibility. It can even look desperate.

#2 - Alternately, the second outcome is that you become detached from your customer's needs in order to get what you need and want. Using the analogy at hand, what this looks like is them coming over to your side of the road. They may not even know they are doing it at first...but after a couple brushes with death from whizzing cars, they will wise up and get the heck-outta-dodge.

As we think about the best way to operate, not only in business but in life, I think this concept of "Meet Me Halfway" goes a Long Way.

This isn't about tit-for-tat, or give-and-take; because "Meet Me Halfway" doesn't pre-suppose immediate reciprocity or restitution. It merely invites each party to offer as much as they can, while both do their best to find a solid and even playing field on which to thrive.