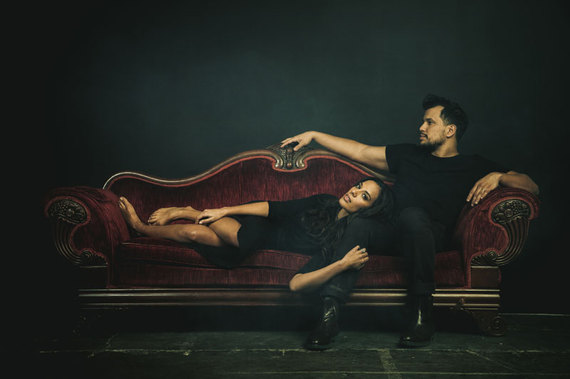 As husband and wife, Abner Ramirez and Amanda Sudano finish each other's sentences, eagerly compliment one another, and still easily laugh together. Making music under the name Johnnyswim, the musical two are magnetic -- their vocals perfectly matched -- they ebb and flow through harmonies so flawlessly, you wonder why they haven't been singing together all their lives.

A mixture of folk, pop and soul, Johnnyswim can't be neatly packaged into one genre of music. But their sound has been compared to bands such as The Civil Wars (their earlier, happy days, of course), and it may even be suggested that their vocals closely resemble what Lauryn Hill and John Mayer might sound like if they recorded together.

Shortly after they had met in 2005, the couple started the band and debuted their EP in 2008 followed by 2013's Heart Beats EP. Releasing their first LP on April 29, titled Diamonds, the couple shared with us what it took to get to this point, what this record means to them and even colored our conversations with a few personal details about themselves. 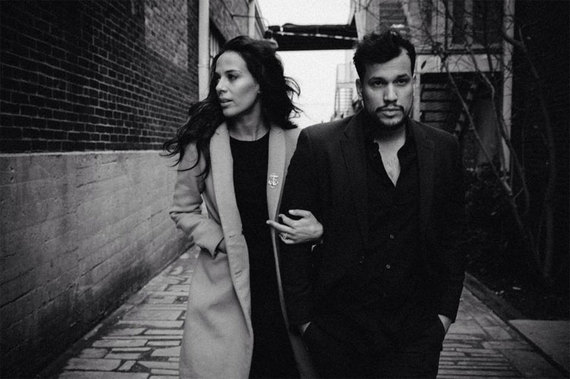 Daughter of the late Donna Summer, Sudano knew music from an early age, touring with her famous mother and providing backup vocals at times. While her singing abilities were always improving, she shared with Billboard magazine that since she wasn't home long enough to learn piano or guitar well, today she mainly relies on her knowledge of the instruments only to get her idea across to Ramirez. Ramirez, on the other hand, is a classically trained musician from Douglas Anderson School of the Arts who was already writing intricate songs in his teenage years.

Both having emerged from musical backgrounds, we wanted to know if there was ever a chance they had considered not doing music professionally. "I think the short answer to that is no. We were always going to be writing music and singing. I think where we questioned was whether or not we would pursue it fully as a career, at least for myself," Ramirez said. "Even after we started Johnnyswim we had been doing it for years, since 2005, and I remember we had really like no traction...Amanda had told me for a year, 'Let's just produce our own EP, we can do it right here, make it here.' A year later, we're sitting on the couch and an idea strikes me, 'cause I was ready to give up forever. And I said, 'Amanda, I have the most brilliant idea, let's record an EP on our own."

"And then I punched him," laughs Sudano. "She was like, 'I've been telling you that for a year!'" continues Ramirez. Their banter is charming, and possibly what makes the couple such fun to watch on stage. 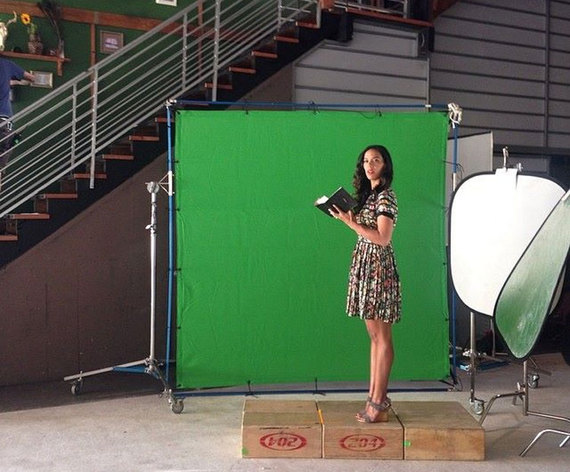 When it comes to writing the melody of a song or the lyrics, they shared that it's not an even split, both have a hand in the process. "There's a song on the record called Closer that Amanda pretty much wrote all the lyrics to in the shower one day to the tune of an old Leonard Cohen song," said Ramirez. "My job was to just play guitar and find a new melody for it. There's songs like 'Home' that was really equally us together, and some songs may be more me, but generally it's definitely an equal effort...We just kind of go at it all together, kind of like we do life."

Describing writing her first song with Ramirez, Sudano said it was a breakup song named "Why'd You Do It?," which started off as a joke. Pairing Ramirez's metal riffs with her own softer melodies, their first song was born. But as it turns out, Ramirez had a lot more to say about their real first time writing together, down to exactly what Sudano was wearing.

"The main memories I have of our first days writing together was of what she was wearing, making sure I smelled right, making sure no one else was in the house, because it was all a rouse to get her alone," laughed Ramirez. "She was wearing a red skirt -- she drove her dad's car up -- with a grey shirt on top and I was wearing basketball shorts. I remembered that might have been a bad decision. And I remember I was ashy, I really do. I remember sitting on the ground thinking 'man I really need to get some lotion.'" He finishes with a hearty laugh, the kind that makes you chuckle just by the sound of it. 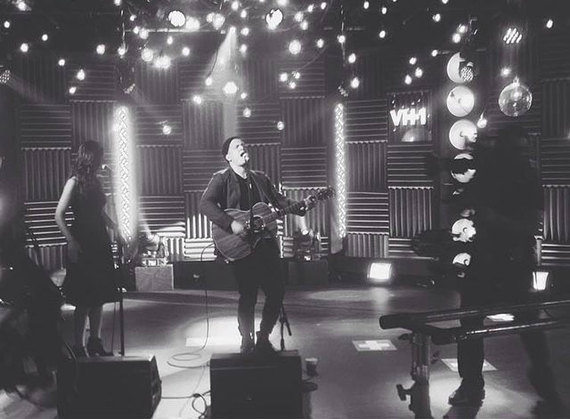 Since that day, the duo has racked up a laundry list of songs and have received recognition for their heart-felt lyrics and one-of-a-kind sound. This new album though, comes from three key years in the band's life which were some of the most trying and most adventurous. The stories told are both of joy and heartache, the pair inviting us into their hearts as they work through the emotions of that time.

"The greatest tragedies we've experienced in our lives happened in the last three years, so as we're writing these songs we try to think of what's going to connect to the crowd, what's the kind of song that people are going to want to play on the radio," said Ramirez. "The songs on this album came out of us as kind of a self-imposed therapy. It was songs we needed to write, and they still remain today, songs we need to sing. It wasn't even just a goal or a process, it was just sort of how it had to be for us to cope with the last few years." 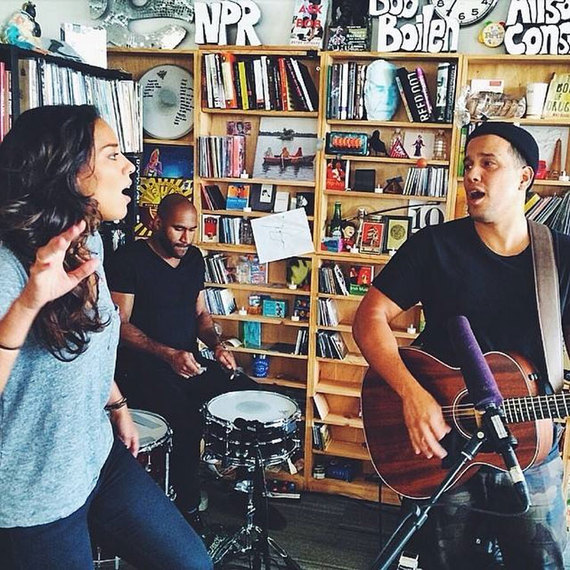 What comes across in this album are songs that are hopeful in spite of all that has gone on, which can be heard in the lyrics: "In the wake of every heartache/In the depth of every fear/There were diamonds, diamonds, waiting to break out of here" ("Diamonds"). Last year, the two released "Heart Beats," on their EP, which came after both band members lost a parent. The result is a beautifully-authentic song that puts you right there with them, feeling everything they must have been feeling at the time.

While singing the songs can bring back those hard emotions during live shows, Sudano also shared that it can bring out a new experience that takes what was once said and connects it to the present in a new way. The duo also have a background in church which they have said continues to affect how they sing today.

"You learn how to get on stage and know how to not make it about yourself. It's not about you when you're up there, in church - -at least the kind of churches that we were raised in -- you were up there to serve and not to get attention," said Sudano. "The same sort of thing happens in our minds during shows now where we don't feel like it's us, and the audience has to give back to us and give us the applause. We still feel like it's an act of service in a way. It helps us not to be overly critical of ourselves on stage and kind of just give ourselves to the moment. That's something I think we fully learned singing in church." An attitude many fans can appreciate. 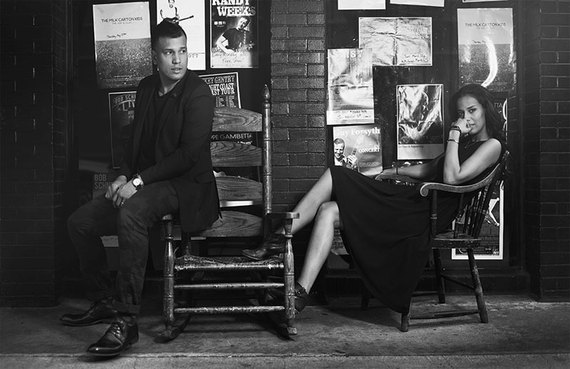 As we discussed their upcoming tour which began on April 22 in New York, the two shared their excitement over the release of their album and what they were looking forward to on the road. Both talked of their enthusiasm for being able to have more songs for their fans and blissfully recalled memories of past live performances.

"One of my favorite moments live, ever, was at Bonnaroo last summer. It was one of our first big shows ever really. And I remember we started this song called 'Annie,' and I just started playing the guitar riff and people recognized it and responded. That was just such a massive rush of emotions for me," regaled Ramirez.

"There is this moment at every show lately where you open your eyes for a second and you see that people are singing along and recognizing things," said Sudano. "And singing parts of the song that you don't even sing live anymore because you just kind of did it once in the studio, and now it's on the record. ... It's kind of surreal." 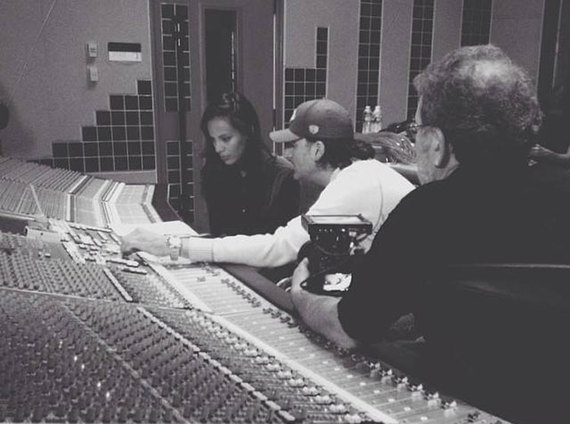 Aside from their music, the couple are energetic and charming with such high spirits that it's hard not to smile when talking with them. One of my favorite answers from them came when asked what people don't initially recognize about the other person. "They never really notice how shy, no, shy's not the word, she's a Leo, right, by her star-sign or whatever," says Ramirez. "But she's the opposite of a Leo. A Leo typically wants the spotlight. I think people don't notice about Amanda how much quicker she is to talk about you and your life than she is about her and her own."

"Abner hides 90 percent of the things that he's good at under just being a nice guy, and so he's good at basically everything and its super annoying," Sudano says jokingly. "For example, I think we had been dating about six months before I found out that he played the violin and is classically trained at the violin. And I thought he was joking...And then I literally didn't believe him so he went to his garage, got his violin, and played this beautiful piece of music and my jaw just kind of dropped. We've been together for eight years and there's still random things that he'll be like 'Oh yeah, I can do that.'" 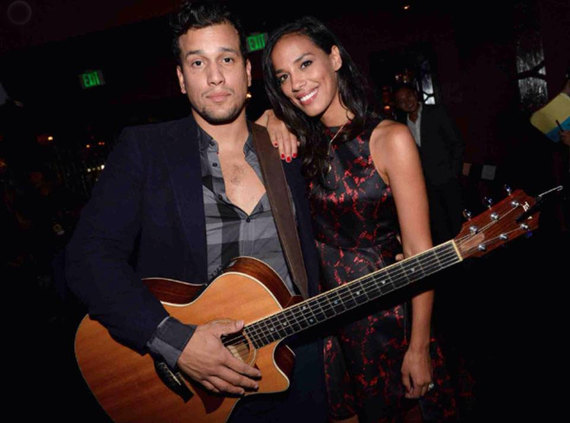 Closing out our time together, we had to of course find out their favorite LA spot for great food since the city is full of hidden treasures. Turns out, it wasn't what we had expected: Din Tai Fung, a dumpling restaurant in Arcadia (30 minutes outside of downtown). With enthusiasm, they explained that the eatery was in the suburbs in the middle of nowhere where not much else goes on. Ramirez also recalled a time in Singapore during a layover when they found themselves walking around the city and stumbled across the same Din Tai Fung restaurant there.

"And then we realized it was 3 o'clock in the morning and it wasn't going to be open. It was equally the most exciting and least exciting three seconds of the day," said Ramirez. 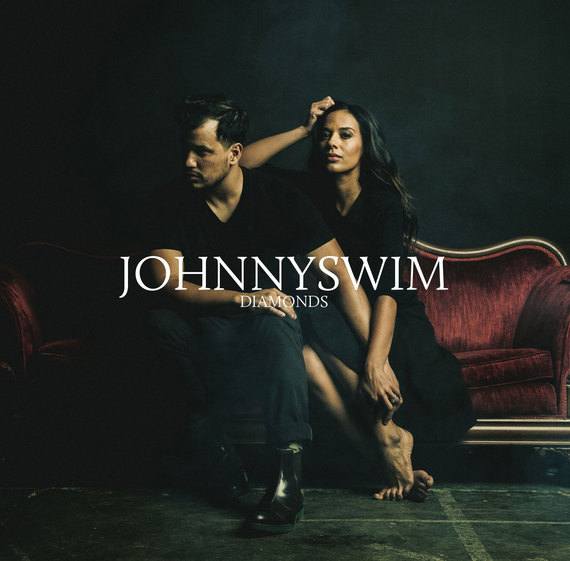 But, if they're not enjoying Dim Sum, the two have very specific ways of relaxing on their days off. "I'll go by myself to a movie with an extra large bucket of popcorn, an extra large Coke Zero, light ice with a splash of Cherry Coke on top, and I will watch every dumb movie with guns available to me," Ramirez shared. "I will 100 percent sit in my living and watch Baby Mama and other movies and do some sort of crafting thing with paper. Like I'll practice calligraphy and I'll be roasting a chicken too because home-cooked meals are my absolute favorite," laughed Sudano.

Diamonds is out now on Big Picnic Records and their national tour is already underway. Check their site for dates and make sure to catch them live as they begin this new whirlwind adventure.

First and last image credit Jeremy Cowart, all other photos courtesy of Johnnyswim