The colorful artwork of Peter Max is among the most recognizable art spanning generations since the sixties. Peter Max defined pop culture through his art at a time when the Beatles were changing the world's outlook with their music. His openness and willingness to meet new people and experience life for all it has to offer is what keeps him so young and relevant, seeming to never age from decade to decade. Peter Max is a wonderfully welcoming man with talent that one not only visually sees on his canvases but also can feel in his aura. 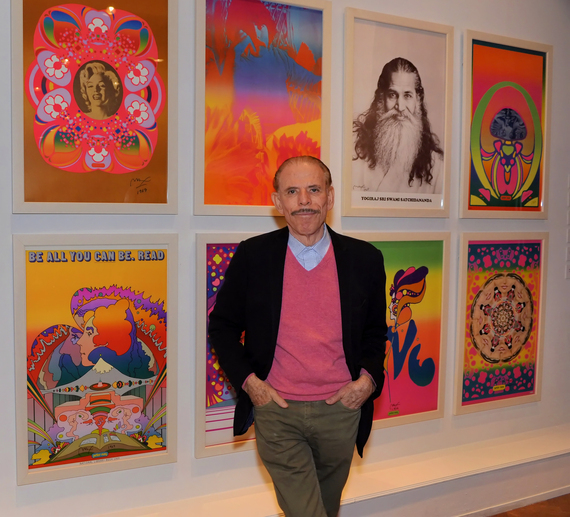 Peter Max is so much more than a mere artist that garnered fame for his color filled statements of beautiful artwork. I feel so fortunate to of had the opportunity to get to know the man behind the work that Impacted my life as a child of the 60's and 70's. Peter Max has taken viewers out of this atmosphere and into a colorful cosmic world filled with color and love through decades of war and peace.

The humble Max has transcended political party lines getting to know, and proudly painting for, six United States Presidents. His presidential works include painting six renditions of the Statue of Liberty at the White House for President and Mrs. Reagan and painting 100 portraits of President Clinton spanning 20 feet wide by 5 feet high. Max was born in Germany but spent most of his childhood growing up living in Shanghai, China where he began to develop his artistic abilities and his true love of art.

Carol Ruth Weber: What age do you remember first beginning to create art?

Peter Max: At two years old; my father would draw with me in Shanghai". My mother recognized my artistic talent and looked for someone to teach me to grow my abilities. She found an artist on the street who sent his daughter, Umba, over to begin teaching me when I was only three years of age. She became my beloved nanny as well.

CRW: Who first inspired you as a young artist?

PM: I studied the great artists such as Van Gogh but my father and nanny Umba were who inspired me. When I left Shanghai at age of ten I remember crying as I left my art teacher nanny and beloved kitty behind.

As a side note Max discussed how he made his first friend as a boy in New York.

"My family moved to Israel and Paris before making our final move to New York in the 1950's. I was in a new world as a young teenager. I met my first friend in the school locker room after hearing a startling musical note being sung. The operatic voice belonged to Paul Sorvino who I am still close friends with."

CRW: When did you first feel that you were finally publicly recognized as an artist?

PM: [The ever humble Peter Max discussed how he appeared on a couple of TV shows.] The first time I sat with Johnny Carson I was on air for 25 minutes and went on to being a guest on Johnny Carson's Tonight Show three more times. I also appeared on the Ed Sullivan show. Ed Sullivan followed that show by devoting an entire show to me.

Just coming out of art school my style was very apropos for the 60's. The most defining moment for me r that that I was a well-known artist came at age 24 or 25 when I was walking through New York City with my then three-year-old son, Adam. Adam viewed the four Peter Max Life magazine covers at a news stand and shouted to me "Isn't that you?" I bought all four copies from the news stand. When the salesman handed me the issues he recognized the cover photo was me and pulled out two more copies of the magazine asking for me to sign, which I proudly did.

CRW: The word psychedelic automatically brings to mind Peter Max- How does it make you feel that your name is used to define the word and was such an important part of the 1960s to 70s?

PM: It was just a period! I do not view myself as a psychedelic person but as a Yogi. Although most link the Beatles with bringing awareness of yoga to the public it was myself who actually brought yoga into the mainstream in the United States. After studying yoga with Swami Satchidananda I brought him to America. After opening yoga centers, I received a phone call from George Harrison, with Ringo, proudly telling me that they also had their own Swami Maharishi Mahesh in England.

PM: Being close friends with the Beatles I was called upon by them to work on the movie. In order to do the job, I would of had to spend six months to a year in Europe and could not commit the time. Instead I offered my advice and consultation for the artwork and then, although I had never personally met him, I recommended the German artist, Heinz Edelmann, well known for copying my style of work. I did finally meet Edelmann, and Heinz handed me his business card that read "Heinz Edelmann, the German Peter Max." I then asked of Heinz one favor - to take my name off of his card.

CRW: How do you see yourself and define who you are?

PM: I love the title of hippy because it means someone who is thinking cosmic and futuristic. As a Yogi my true feelings about my life is a line stated in yoga "Love all and serve all."

CRW: How it came about that he worked with Lee Iacocca of Chrysler to save the Statue of Liberty?

PM: In 1976 I began painting the Liberties in celebration of the countries bicentennial. I went on to celebrate the Statue by painting Liberties in the years following. In 1981 I was invited to paint six Liberties at the White House for President Reagan and his wife Nancy. Upon returning to New York a friend came to me deeply concerned about the destruction of the Statue of Liberty due to its dire need of renovation. Seeing an ad with Lee Iacocca and Chrysler brought to mind a friend of mine who had the ability to contact Lee. Soon was working in harmony with Lee Iacocca to raise the tremendous amount of funds needed to renovate the beautiful statue. I appreciate America as being the most artistic nation because of its diversity.

CRW: How old are you, how old do you actually feel and what keeps your work relevant?

PM: I am a bit past 70 years but I feel more like I am in my late 30's to early 40's, and even sometimes still in my 20's. I credit my love for creativity in keeping me young - Creativity and I am one! Just as a person may be born with blue eyes a person is also born with creativity already a part of them. Being a Yogi keeps me focused and humble. Being a total vegan helps me to look and feel young and energetic.

CRW: Do you have a favorite piece that you have created or are most proud of?

PM: All of my works are my favorite and they all make a statement. The one that has become his most popular work is "Love", an image with the word Love floating on a colorful ombre background coupled with a profile of a girl.

When I asked him how many pieces of art has he created, Peter joyfully answered "More than 4 pieces of art." He continues to paint every day, staying creative 24 hours a day. Peter speaks like the proud father he is of his son and daughter. His voice sparkles when explaining how he met his incredible wife and knew from the first moment that he saw her, that he was going to marry her.

Max is not only an icon and a talented artist, after having the honor of speaking with him I believe that much of his creativity is derived from being an amazing human with a sense of gratitude for the purity of life. He sees the good in all living creatures even the tiniest of bugs that he finds in his abode which he will gently pick up to carry down 15 flights of stairs to place safe and alive in the peaceful park across the street from his building. The art of Peter Max is symbolic of the vivacious person that the man, Peter Max, is.

All should follow the lead of Peter Max and never be afraid to dance!