Indo-American Arts Council founder and executive director Aroon Shivdasani has lived all over the world but has called New York home for about half her life. Her vision is to make Indian culture accessible to Americans across a broad spectrum, encompassing film, music, dance, theater, fine arts, sculpture - any medium in which the Indian aesthetic can be expressed here in North America.

I spoke to this dynamic and amazing woman last week in her New York City office, trying to put my finger on what gives her so much energy and such a broad vision. Her Council was founded 13 years ago to let Americans know that the arts were alive and well in India. Today, Indian culture is becoming almost ubiquitous in New York City, and the Council under Aroon's leadership has played a large role in it mainstreaming. 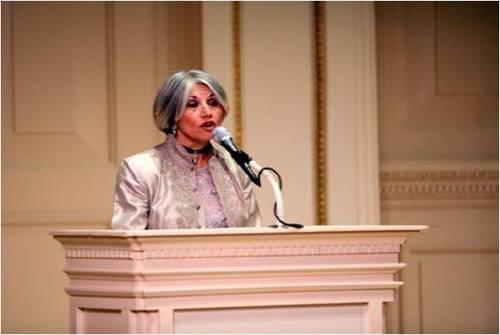 Americans once believed Indians were either rajas with flowing robes riding atop elephants, or starving beggars with their hands out, Aroon chuckles.

"When I first came to America people thought that we Indians were either rajas with flowing robes riding about atop elephants - or impoverished beggars. There was no thought of the in-between. There were many Indians already here - but most of them were hidden in the universities. The British sent Indians from India to their colonies - today's Guyana, for example - as indentured labour. The Indians that came to North America are highly educated professionals," Aroon told me.

In fact, after U.S. immigration laws were changed in 1965, Indians began to immigrate to the U.S. in larger numbers. As a group, they are the most highly educated immigrant community here, with approximately 68% of Indian Americans over the age of 25 possessing a college degree and 36% possessing a graduate degree.

"The initial Indian immigrants were in a lower economic stratum. Today, 90% of Indians in North America have attended the best universities and are a visible, viable minority," Aroon told me. "This country now sees Indians in a whole different milieu."

Two other interesting facts: Indian-Americans are the most religiously diverse immigrant community in the country, comprising of Hindus, Buddhists, Jains, Sikhs, Muslims, Jews, Christians, Parsis, and Baha'is, speaking languages such as Hindi, Urdu, Punjabi, Gujarati, Tamil, Telugu, Bengali (16 Indian languages), and have the highest median household income of any group in the U.S., at $83,820. 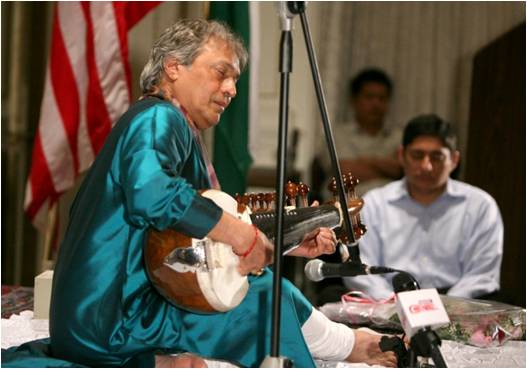 "Just two decades ago, a few arts afficianados knew of Ravi Shankar, and maybe Satyajit Ray, but not much else. Today, people may be more familiar with Mira Nair, Ustad Amjad Ali Khan, and Slumdog Millionaire," she said. "No one is ignorant because they want to be, but because they have not yet been exposed."

The Council's mission is to passionately promote, showcase, and build an awareness of Indian artists and artistic disciplines -- performing, visual, literary, and folk arts -- in North America. The IAAC is a not-for-profit 501(c)3 arts organization passionately dedicated to this mission.

I was lucky to attend college with a grandson of the legendary Indian man of letters, Rabindranath Tagore. My art major friend's name was Sundaram, and today he owns a collection of high-end galleries around the world. He was my first teacher on Things Indian. A few days ago I spoke with Aroon's friend, philanthropist and social activist Isheeta Ganguly by phone in Mumbai to talk about Sesame Street India and support from the Rockefeller Foundation. I believe she and Aroon will continue my education concerning the sub-continent. 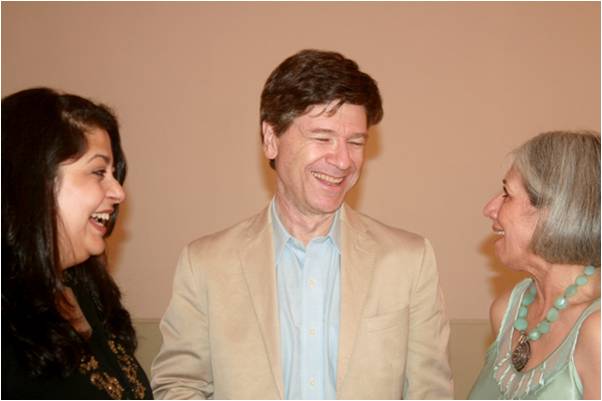 "'All Indians in America are techies or in medicine,' Aroon paraphrased the oft heard remarks of other New Yorkers when she began the Council. "People just did not realize that Indians play a pretty major role in the arts. And, unbelievably today, Indian art is everywhere!"

She has often been complimented on her language prowess. "You speak English so well!," she recalls being told. That is considered normal for an educated person growing up under the former British Crown. In addition, Aroon holds a Masters degree in English Literature from Iona College here in New York.

"We still have a long way to go for the entirety of Indian culture to break through here - we have 16 national languages, and each cultural tradition has its own theater and art. But New York City is such a wonderful diverse cultural mix this is the ideal place to share the myriad possibilities of India with Americans," Aroon explained.

"Back when we started in the 1990's, Indian cultural events were presented on folding chairs in Queens or Edison, New Jersey - and there was no sharing of information. Indian-Americans were preaching to the choir. Now, we are playing mainstream venues and mainstream America - and the press - have begun paying attention." 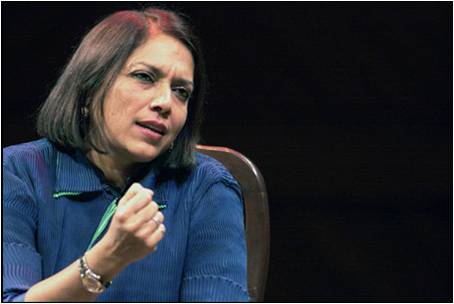 "Americans like a spectacle. Look how many tourists line up to see Broadway plays! This is the draw of Bollywood. We are starting to see Bollywood influences in American movies. Songs used to be confined to the Broadway stages but now American movies are discovering music and dance." 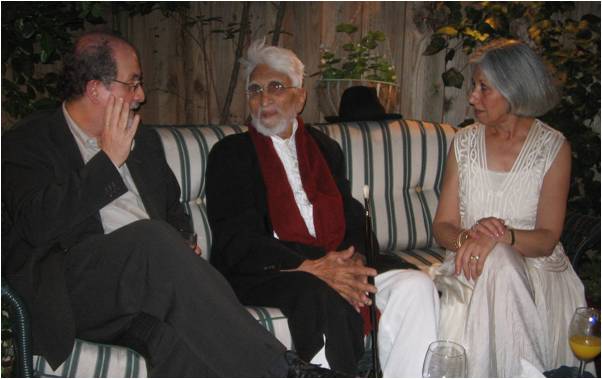 British-Indian author Salman Rushdie and artist M.F. Husain at a party in Aroon's back yard.

"Another major Indian influence in America," Aroon shared with me, "is color. Think how Americans used to prefer earth tones - gray, beige, black. India has always been known for color. Now color has taken over in America.... look around you! Thank India!"

"Food is another part of American culture where Indian influence is pervasive. How Americans eat. People's taste buds have been awakened and now so many restaurants feature food using coriander, cumin and other Indian spices. Leading chefs are also experimenting with resenting food with different Indian spices."

"Another way in which the English-speaking world is absorbing Indian culture is subtle but real. Words such as bungalow, chai, and pajamas are Indian in origin. I once saw a play in "Spanglish," and thought to myself that Hindi and English are equally mixed and one uses a lot of Hindi terminology in common parlance without thinking... avatar, guru..."

"Of course, American culture was big in India for a long time. "Cultural exchange is a two-way street. America has always impacted India, whether in medicine, IT, finance or the arts. I remember watching Doris Day and Rock Hudson as a child. We thought we knew the U.S. because of Hollywood!," Aroon laughed.

"Indians often picked up British snobbery, believing Americans were always brash and loud - cowboys. Everyone seemed happy, going to the beach. But that has changed. Indians particularly like the American university system. American universities are highly esteemed and very different from the British system. Here, education is based on individual thinking. The British system teaches you basics but also has the rote memorization."

In North America today there are between two and three million Indo-Americans. "This is a force to be reckoned with." Aroon said. This represents the fourth largest immigrant group here, behind Mexican Americans, Chinese Americans, and Filipino Americans. Harold & Kumar, in the brilliant White Castle film, are rebelling against the tremendous expectations felt in the Indian-American community. 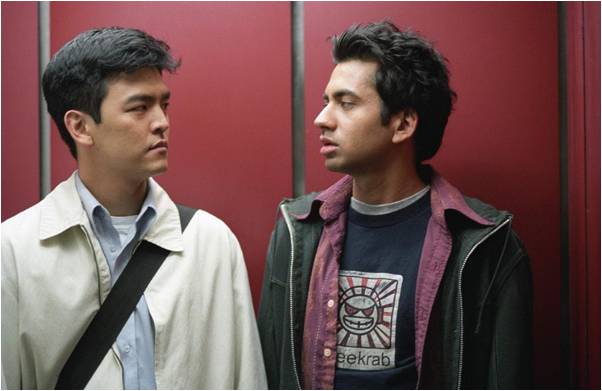 "My goal is to help the people of North America open their senses to the arts of India - film, painting, theatre, literature, music and dance - they will be the richer for it. They will actually enjoy that rich celebration of life! To enjoy life is so American: life, liberty, and the pursuit of happiness, you know! And they will be happy when they do, instead of travelling the world in search of the perfect hamburger! That is so unfair to any of my erudite American friends - but funny nevertheless," she laughed.

Turning serious again, Aroon said, "U.S. foreign policy has not been popular in India at all, historically. The U.S. was always seen as siding with Pakistan, which worked against India. Plus, India was always distant during the Cold War -- sitting on the fence -- not wanting to choose between the U.S. and U.S.S.R. As much as Indians still love to visit their children studying here, they still damn American foreign policy."

The election of Barack Obama has not ended suspicion. "Initially India rejoiced with his election, but now they are watching cautiously." 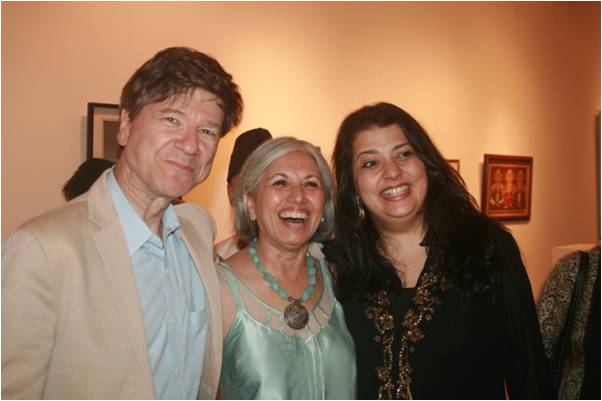 To begin to understand Indian-Americans, one must begin to know something of India. India is the seventh largest nation in the world, the second-most populous country with over one billion people, and the most populous democracy in the world. India became an independent nation, free from the British, in 1947. Heroes of Independence were Mahatma Gandhi and Jawaharlal Nehru. 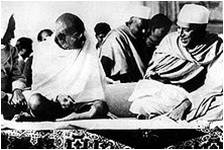 The heroes of Indian Independence in 1947 were Mahatma Gandhi and Jawaharlal Nehru.

India is a land of contrasts. It has one of the fastest growing economies in the world and yet sadly still suffers from poverty, illiteracy, corruption, disease, and malnutrition - as portrayed in Slumdog Millionaire. India is powerful. It is a nuclear weapon state and has the second-largest standing army in the world.

In another article in both The Daily Kos and Stewardship Report, I have highlighted the myriad cultural opportunities offered by the Indo-American Arts Council under Aroon's leadership this spring and summer. Each event is a tremendous opportunity to explore the diversity and artistic richness of the Indian subcontinent - here in New York City.

To understand the richness and importance of Indian culture, I just have to look back on my own organization, Orphans International Worldwide (OIWW). Several months ago we held a benefit for our project in Haiti, and one of the most important videos taped for the event was from an Indian prince Manvendra Singh Gohil of the Royal House of Rajpipla. Indians helping Americans helping Haitians. The world is smaller every day.

Indo-American Arts Council founder and executive director Aroon Shivdasani pushes hard to help make it even smaller. For her drive, wisdom, sense of humor, and tenacity, I salute Aroon as a Thought Leader and Global Citizen. Aroon is a multi-colored tread in the rich tapestry that constitutes New York City, and by extension, our world. Our world is smaller - and more colorful - thanks to Aroon Shivdasani.

See other stories related to India by Jim Luce:

Indian-American Med Student on Malaria and Poverty in Nigeria (HuffPo)