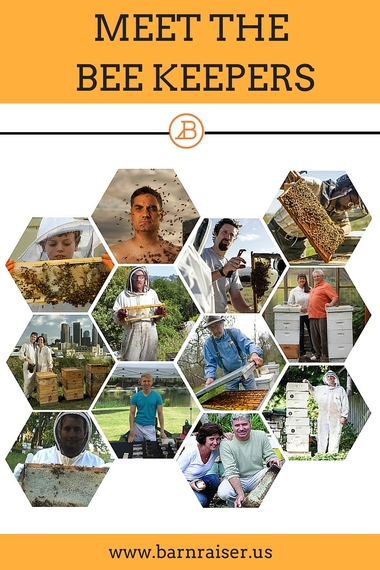 Pictured from left to right, top to bottom.

For the respect inherent in their work, the dedication to preserving and rebuilding resilient local communities, and their open willingness to teach others and spread their craft, these beekeepers are truly the bee's knees.

The Bocks of Buzzed Honeys

The Buzz: Inspired by an encounter at a farmers' market, David dove into beekeeping and brought his two sons Leo and Simon along for the ride. They're all hooked and they produce an ever-changing line of raw honey, from their own backyard hives, and others throughout Los Angeles and rural southern California. If you're in the area, you can buy honey from the boys when they sell it from their honey stand. Buzzed Honeys are available at retail shops around Los Angeles (the list is here).

The Buzz: Discovering how reflective honey is of the environment in which it was created, Damian founded Bee Local to promote localized natural honey across the country. Produced at home in Portland, they never blend their raw, unfiltered honey, allowing the natural flavors to shine. He works with like-minded beekeepers across the country to produce to source quality honey reflective of the unique geographies through the states.

Rob Keller of Napa Valley Bee Co.
The Buzz: Rob found his love for bees through art and now is creating a community of beekeepers to revitalize local bee populations and spread sustainable keeping. He seems to do it all; run large scale apiaries and small private hives, teach beekeeping, and construct a local network of beekeepers. To see the scope of this project, check out his amazing 2014 campaign for the Napa Valley Bee Exchange!

Bob Redmond of Urban Bee Co.
The Buzz: After learning about Colony Collapse Disorder, journeyman-level certified beekeeper Bob started Urban Bee Co. to promote natural urban beekeeping in Seattle. To achieve this, he uses Certified Naturally Grown practices and permaculture bee gardens in spots throughout the city. To increase his impact, he's created a community education program and engages with other local beekeepers. Oh, and he delivers his honey by bicycle.

The McFarlands of HoneyLove

The Buzz: Rob and Chelsea are crusaders of beekeeping. After rescuing bees with Backwards Beekeepers and learning natural methods from Kirk Anderson, they're now on a mission to legalize urban beekeeping in Los Angeles. Through their nonprofit conservation organization, they manage urban hives and host classes to educate the community and support urban beekeepers. We love this profile of them (with an appearance by Kirk) in LA Weekly.

The Buzz: An internationally known organic beekeeper, he's been keeping bees for over 40 years and has spread his knowledge by working with multiple organizations. Through Backwards Beekeepers, he relocates feral urban colonies and teaches a natural, hands-off approach to beekeeping. Through this work he met the couple behind HoneyLove, taught them his ways, and continues educating beekeepers as the resident guru.

The Webbs of Mtn Honey

The Buzz: Carl and Virginia, a third generation beekeeper, have spent more than 40 years working with and supporting honeybees, beginning in 1959 and 1964, respectively. On their land in northern Georgia and western North Carolina they manage 400+ colonies, produce raw sourwood honey, and are certified to breed Russian queen bees. They've received the award for Best Honey in the World (twice) and over 100 first place and best of show awards at national and regional competitions.

The Buzz: The fact that John and Mary Ann both have office jobs doesn't stop them from keeping bees and producing raw, unfiltered Portland honey. They tend their bees organically and take measures to pamper their bees without getting in their way. John is an apitherapist and he specializes in bee venom therapy, which is like a combination of natural medicine and acupuncture.

The Bouffards of Round Rock Honey

The Buzz: Konrad and Elizabeth run two honey companies in Texas. Round Rock is a wildflower honey that comes from hives placed in over 90 sites throughout central Texas in order to capture the diversity of microclimates in the region. Goodbee's is a budget-friendly line of honey and honey products sourced from other beekeepers. A former teacher, Konrad continues educating through hands-on beekeeping classes in Texas and select cities.

The Buzz: John is a third generation beekeeper, inheriting his passion and knowledge from his father. Produced in the mountains of northern Georgia where sourwood trees thrive, they specialize in sourwood honey, a rare and gourmet variety, and recognized for it as a 2016 Good Food Awards finalist. Bee Wild has grown out of Organic Mountains Honey and John is adding other honey products to support healthy living.

The Puetts of Big Island Bees

The Buzz: As a fourth generation beekeeper, Garnett has inherited a wealth of family knowledge. Their hives have grown over the past 40 years and Garnett now manages almost two million bees. In addition to organically-made raw single-floral honeys that capture the flavors of Hawaii, he crafts apisculptures with the beeswax. Whether he calls upon his Fine Arts degree from Pratt or just tunes into the bees, his sculptures have been displayed in prominent museums and exemplify the artistry of the bees.

The Buzz: Nathan runs one of the first commercial urban apiaries in the country. He manages over 80 hives in the Madison area, hosted in backyards and on rooftops by bee-savvy locals. Nathan loves to producing in small batches to capture the seasonality and locality of the flavoring. He eagerly engages with the community by teaching beekeeping classes, offering a honey CSA, and participating in local events.

Check out more good food makers and stories at Barnraiser