The kill line can't stop. Josh Agland learned this from his supervisors during his first week as an employee at a slaughterhouse in Australia, where he worked for three years.

If the daily kill quota isn't met, workers don't get the pay incentives that make their wages livable. Even if an animal falls or is still alive on a part of the kill line when they aren't supposed to be, the line isn't stopped--if anyone dares to try, they feel the wrath of their co-workers, who are losing valuable time and money.

The slaughterhouse is compartmentalized. Workers are tasked with one link in the chain, like automatons, performing the same repeated motions hour after hour. Only authorized personnel are allowed on the kill floor. As an in-house electrician, Josh had an unusual vantage point: he was there when the individual animals arrived, he watched them go fearfully to their deaths, and he saw their bodies being cut apart then shipped out for consumption.

The animals are visibly scared, dehydrated, and covered in feces when they arrive at the slaughterhouse packed into double-decker trucks, says Josh. Animals who resist being moved down precarious ramps and slippery floors are zapped with high-voltage prods in their sensitive faces and stomachs. The process is stressful--the animals have never seen so many humans, been in this environment, or felt the pain of an electric prod.

Their senses are in overload. They smell and taste the feces, blood and steam in the air. They can hear so much foreign noise: the clunking of mechanical chains, pneumatic control valves, shouting of the workers inside, industrial white noise. One-way gates prevent the animals from backing away in fear. Many get caught as they sprint forward to remain close to a friend for comfort.

Josh says one of the saddest moments he witnessed was an ex-dairy cow with protruding hips and large pink X spray painted on her back. She moved along the kill line without coercion--she knew the routine of being shuffled around from her years spent trudging back and forth from a milking parlour. Exhausted and depleted, she collapsed onto the cold concrete floor of the slaughterhouse. Instead of euthanizing her, on-site vets made the decision to leave her overnight and kill her for meat first thing in the morning, when the line could be slowed. She was pregnant when she was killed, her baby cut from her stomach.

Workers are expected to kill 100 animals per hour, nearly two animals per minute. The result is that not all animals are knocked unconscious before they are moved along the line to have their necks and torsos cut open.

Some animals are even skinned alive.

At the hide puller station, Josh once witnessed a steer still kicking, shaking his head and bellowing--two of his legs, his tail, and his genitals had already been removed at previous stations. Josh says many workers saw the skin being pulled and sliced off the live animal's body. Josh reported the incident but was ignored by superiors who hadn't been present and denied that it happened.

The hide puller machine gave him nightmares, Josh says. It's where the once-living beings became identical hot carcasses. With great industrial efficiency, the rotating steel drum is lowered with chains, peeling the valuable hide from the animals' body while operators saw at the connecting tissues. The skin is pulled off the face last as the lifeless body jolts from the industrial force.

At first, Josh didn't want to talk about his years spent in the slaughterhouse. He felt ashamed by his own complicity in the killing industry, but he'd also absorbed through experience another uncomfortable reality: society shames those who do the dirty work of killing for us. What kind of person could work in a slaughterhouse, we wonder, while simultaneously employing them to be there. 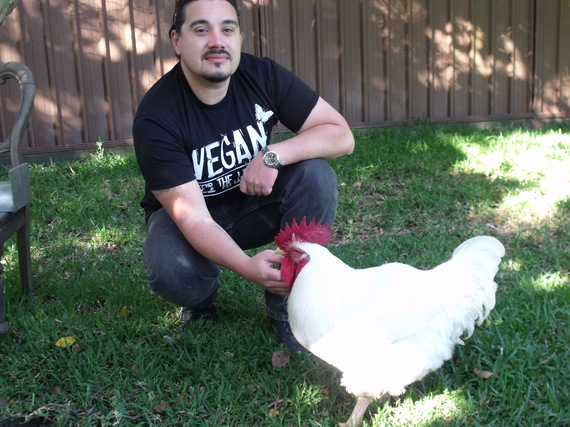 Josh is now employed as an advisor for Australia's first elected animal rights politician, Mark Pearson of the Animal Justice Party, having run for office himself and scoring well. He reads Tolstoy, Plato and Japanese spiritual writers and organizes animal rights actions. Josh recently became a father, which has made him even more motivated to protect innocence and promote compassion.

Josh says we need to be aware of what's happening to animals and to fight for them. He says, "the key is to unlock that individual trigger of empathy in people." Josh encourages people not to underestimate the power of their voices--make them loud and clear, he says. "We are not just speaking for ourselves but the billions of others who cannot be heard."