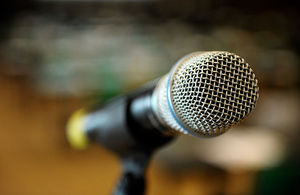 Giving a speech is one of the more nerve wracking things you can do. I've written previously about some new augmented glasses that can help you with your delivery, but you still need some good material to begin with.

Hot on the heels of robots that can perform improvized jazz, researchers have developed machines that can write a great speech for you.

Whilst there have been millions of speeches delivered down the years, great ones are often pretty rare. They also tend to share many of the same characteristics, whether in format, argument and even use of words.

The researchers followed a similar route as that taken by the team behind the robot jazz player mentioned earlier. The machine was trained on around 4,000 political speeches delivered over 53 different Congressional floor debates.

Collectively, the speeches contained over 1 million words, with the researchers tagging each speech according to who was making it, whether they were for or against the topic being debated, and their political leaning.

How it was done

The researchers first tagged each word for whether it was a noun, verb, adjective and so on. They then performed a probability analysis to determine the likelihood of particular words appearing before other words.

This then formed the basis of the automation process, with the machine informed of the kind of speech required, and who it's required for.

The machine will go word by word through the speech and create a probalistic text, based both on the likelihood of words being used together and on the likelihood that a particular topic will appear in a speech.

It sounds farfetched, but in early tests the results are actually quite good, as you can see from a sample speech generated for a 'Democratic speech'.

"Mr. Speaker, for years, honest but unfortunate consumers have had the ability to plead their case to come under bankruptcy protection and have their reasonable and valid debts discharged. The way the system is supposed to work, the bankruptcy court evaluates various factors including income, assets and debt to determine what debts can be paid and how consumers can get back on their feet. Stand up for growth and opportunity. Pass this legislation."

It's a pretty impressive effort, and I'm sure that the algorithm can improve significantly with more training. We've already seen systems make impressive strides with things like automated reporting, but this is more impressive given the complexities involved in speech.

"In particular, the grammatical correctness and the sentence transitions of most speeches were very good," the team say.

They are cautious about the short/medium term prospects for the algorithm however, and don't expect speech writers to be in jeopardy just yet.

"Despite the good results it is very unlikely that these methods will be actually used to generate speeches for politicians," they say.

It is a sign of progress however, and I've written previously about work that automates understanding of things such as sarcasm and empathy in our words.

The code is freely available on GitHub, and I very much encourage you to try it out and offer your feedback to the team on how it could be improved.