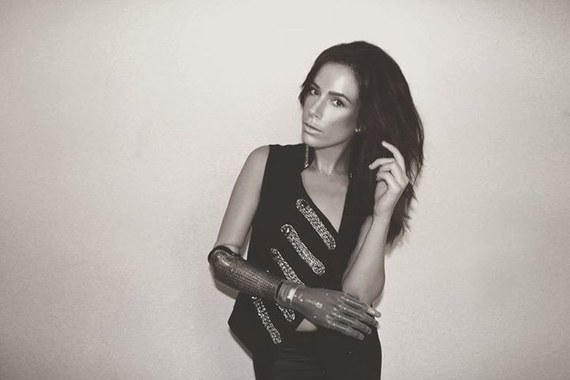 Born with a disability, she is determined to change the industry's standards of beauty.

Growing up, Rebekah Marine had dreams of becoming a model, but having been born without a right forearm, was told that it would never happen. But she wouldn't take no for an answer, and in just a few days, she'll be walking at New York Fashion Week.

Despite others' discouraging words, Rebekah decided to test her luck in the industry after being fitted for a prosthetic limb four years ago. She began to realize that her disability did not have hold her back, and it could in some ways help her, and others.
"Being a model with a disability has been extremely difficult over the past couple years," she told Mashable. "But I've come to realize that it's all about finding your niche."

In February, she walked at NYFW for the first time, and earlier this year was also featured in Nordstrom's 2015 anniversary catalogue. But for Rebekah, it's no longer just about being a model, it's about changing people's perceptions. "It's so important to include more diverse models, because after all, nearly one in five people in America have a disability," she says. "We should be celebrating uniqueness, not conforming to what the media thinks is beautiful."

At a time when the fashion industry's ideas of beauty are rapidly changing -- from more fluid concepts of gender to accepting different body types and celebrating diversity -- Rebekah is poised to make a difference, and help shape a more inclusive fashion industry that allows everyone to feel beautiful in their own skin.