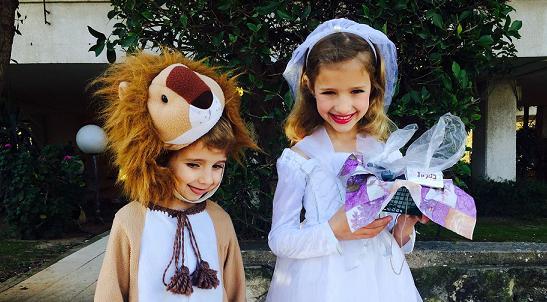 Purim is the ultimate thriller: from fear of annihilation to exhilaration after the salvation. And the celebrations on this festival are truly the ultimate after-party, given the commandment to down booze to the point where you cannot tell between the bad guy, a.k.a., Haman, and the good guy, whom we know as Mordechai.

Every great story has a turning point, a key moment when the tension is at its peak, and its resolution creates a catharsis. In the Purim story, it is definitely the overturning of the verdict to kill the Jews.

The Purim scenario contains several buildup points that lead to the catharsis. If we overlook the significance of these points, we will miss out on the message of the whole "movie," and we'll be left with a great story, but not much more. Such a point, for example is when Esther sends Mordechai a message: "You want me to go to the king and beg for your lives? Don't just sit there at the king's gate; go, gather the Jews!"

Mordechai, the good guy, is helpless by himself. But when he gathers the Jews, he renders Haman's primary argument in favor of destroying them invalid. Haman says to the king, "There is a certain people, scattered and dispersed," and explains that they are not keeping the king's laws, so the king has no interest in having them around. It may seem odd that Haman ties together the dispersion of the Jews with disobeying the king's laws. But Haman is very shrewd; he knows what it means to be a Jew, and under what law the Jewish nation was established. The Jews became a nation when they pledged to be united "as one man with one heart." When they are dispersed, they're not united, as they were commanded, and this is what Haman points out to the king.

As long as the Jews are dispersed, even Queen Esther cannot help them because they are still breaking the king's law. But when they unite, they become a nation once again, exactly as God (portrayed by King Ahasuerus) instructed them, and Haman's decree is bound to fail.

The thing about the Purim script is that it's perennial. Today's world seems to be heading toward another round of Hamanism, and the scenes that took place in Shushan can now unfold in Paris, London, or anywhere in the world. As then, we are going through the same cycle of denial and sobering to the reality that anti-Semitism is real and vibrant.

More and more people are speaking openly about the return of the dark ages, from intellectuals like Prof. Robert Wistrich to pop stars like Madonna. This is very important because the script can develop in two ways. It can go toward some version of the events of the previous century, as Madonna pointed out, or toward a much more desirable direction, such as in Shushan.

By unity, I don't mean that we must all converge in Israel or any specific location. Unity is an internal thing, a latent quality within us that we've neglected for a long time. Our communities are declining, and the concept of mutual guarantee is more a slogan than a fact of life.

And yet, solidarity is the heart of our nation. We need to remind ourselves that we became a nation only when we pledged to be "as one man with one heart," united to the core, and that we were told then that we would be "a light unto nations," spreading that quality among the nations. When we are disunited, we are not spreading unity, but the contrary. As a result, the nations are blaming us for causing wars.

Jews are always at the center of attention, and today more so than ever. We can try to ignore it, but if we just look at the extensive coverage that Israel and Jews are receiving in world press compared to any other nation or state, we'll recognize it. When we are displaying so much discord and contention, it's no wonder that people are saying that they don't need us around.

It's true that some people fear that Jews use their solidarity against the rest of the world. But when we unite not in order to promote our interests, but to pave the way to unity for all people, they will feel it and welcome it. In my meetings with anti-Semites, this approach has always been met with positive, even warm reaction.

"You, the friends who are here, as you were in fondness and love before, henceforth you will not part from one another... And by your merit there will be peace in the world."


Purim is a great drama. It is also a symbol of what our world can be when we abolish the disunity between us. As then, so now, it has to start from the Jews. "Love your neighbor as yourself" was given to us first. As we practiced it before the ruin of the Temple, we must learn how to practice it now, and share that quality with all of humanity, thus becoming a beacon of hope in a perplexed world, or put differently, "a light unto nations." The happy end of the movie, therefore, depends on the unity of the Jews.