Royal Dutch Shell may have recently scrapped its plans to drill for oil in the Chukchi Sea, but the oil industry has not given up its designs on the Arctic Ocean's fossil fuels. In September, Houston-based company Hilcorp submitted a plan to develop and produce oil from the Liberty prospect in the Beaufort Sea off the north coast of Alaska. If the Obama administration approves Hilcorp's plan it will mark a dubious milestone: the first oil produced entirely from federal waters in the Arctic Ocean.

The President has made several important decisions in recent months to slow or halt Arctic oil exploration, but he can still do more. President Obama has the power to keep Arctic oil in the ground for good, and approving Hilcorp's plan would be a step in the wrong direction. 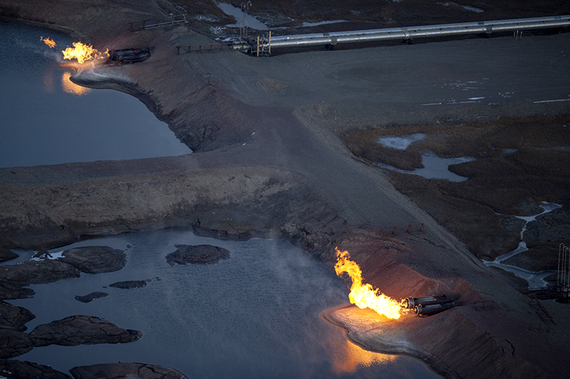 Hilcorp is not a household name like Shell or Exxon, but it has quietly grown to become one of the largest privately held oil and gas companies in the United States. Billionaire founder, chairman and CEO Jeffery D. Hildebrand regularly cracks the list of the 100 richest Americans and is a major funder of Republican politicians.

Founded in 1989, Hilcorp has been a big player in the recent fracking boom and has pushed the envelope on aggressive tactics to extract oil. In Pennsylvania, Hilcorp tried to exploit a clause in a state law that allowed for "forced pooling." Under that law, landowners who refused to sign over their drilling rights could be "integrated" into the drilling agreement against their will. After widespread controversy, Hilcorp backed down in 2014.

Apart from fracking, Hilcorp has also made its name over the years by taking over assets from other oil companies and extracting additional value from them. In 2014, Hilcorp purchased stakes in three offshore Arctic oil fields that had previously been owned by BP. Two of these fields -- Northstar and Endicott -- have already produced oil from artificial gravel islands located in Alaska state waters. The third was the Liberty prospect, located 5.5 miles offshore in federal waters.

Northstar is an artificial gravel island similar to the one proposed for the Liberty site. Although Northstar is located in Alaska state waters, it drills into leases in federal waters and is therefore considered a joint state/federal project. Photo Credit: BSEE.

To develop the Liberty prospect, Hilcorp has proposed to construct an artificial gravel island on the site and then drill from the island down into the oil field. The prospect may yield as many as 150 million barrels of oil, which would be transported to land via a subsea pipeline. BP still retains a 50 percent stake in the Liberty project, but following its more than $20 billion settlement for the 2010 Deepwater Horizon disaster, the company declined to be the public face of this new Arctic project.

While gravel islands pose different risks than Shell's plan to use floating oil rigs to drill 65 miles offshore, those risks are not inconsequential. Should a blowout occur, the Worst Case Discharge (WCD) scenario for the Liberty prospect envisions a spill of 2 million barrels of oil over 30 days, which is more than three times as large as Shell's estimated WCD from its recently scrapped Arctic drilling venture. A spill from the island during the open water season would reach shore much more quickly and would leave considerably less time for response measures to be put in place.

The construction of the gravel island will likely harm a nearby marine habitat known as the "boulder patch," one of the most unique and biologically diverse habitats in the Beaufort Sea. Noise and light pollution from the project operations will disturb endangered species such as bowhead whales, polar bears and the Pacific walrus. What's more, the oil extracted from Liberty island will only worsen climate change and its impacts on Alaskan and Arctic ecosystems.

The New York Times recently published an exposé of the 158 families who have donated nearly half of the money raised so far in the 2016 Presidential election. These donors are "overwhelmingly white, rich, older and male" and their money comes primarily from the finance and energy sectors. As the Times noted, "not since before Watergate have so few people and businesses provided so much early money in a campaign, most of it through channels legalized by the Supreme Court's Citizens United decision five years ago."

Jeffery Hildebrand's contributions of more than a quarter-million dollars earned him a spot on this rarefied list. What's more, seven of his neighbors in the River Oaks neighborhood of Houston also made the list, including executives for Kinder Morgan, Freeport-McMoRan and W&T Offshore. That adds up to nearly $8 million in political clout from a remarkably concentrated pocket of wealth.

So far in 2015, Hildebrand and his wife, Melinda, have donated $250,000 to Right to Rise USA (a super PAC supporting former Florida governor Jeb Bush), $35,000 to the Republican National Committee and $5,200 directly to Jeb Bush's campaign. These donations have helped Bush amass the largest war chest in the 2016 Presidential race thus far. Hildebrand also gave $15,000 to Jeb's son, George Prescott Bush, in his successful campaign to be the Texas Land Commissioner.

The Hildebrands have concentrated their largesse in the states where Hilcorp does business: especially Texas, Louisiana and Alaska. In 2015 they gave $5,200 to the re-election campaign of Senator Lisa Murkowski (R-AK), a staunch advocate of Arctic drilling. Hilcorp Energy itself has been a consistent donor to the Fund for Louisiana's Future, a super PAC supporting Sen. David Vitter (R-LA), who is running for Governor this year. 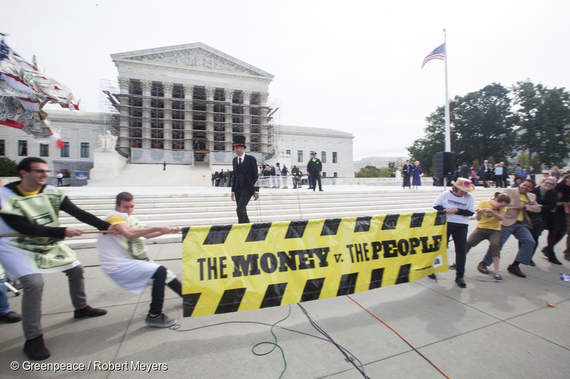 Activists dressed as $100 bills representing "The Money" have a tug of war with activists as "The People" in front of the Supreme Court.

In 2012, Hildebrand gave $450,000 to Mitt Romney's Restore Our Future Super PAC and was a strong supporter of former Texas governor Rick Perry. A large $110,000 contribution to the campaign for the Texas Railroad Commissioner might seem mysterious at first glance, except that the Railroad Commission doesn't have anything to do with railroads and is actually the main state regulator of the oil and gas industry. In Alaska, Hilcorp donated more than $13,000 to defeat a 2014 referendum that would have repealed tax breaks for oil companies.

Hildebrand -- like many oil and gas executives -- seems to use his political donations to invest in politicians who can advance his company's interests. Governor Bush's energy plan is heavily focused on fossil fuel extraction and earlier this year he tweeted out his support for Arctic drilling. Senator Murkowski has been a fierce critic of the Obama administration's energy policies and the strongest voice in Congress for expanding Arctic oil drilling, both offshore and in the Arctic National Wildlife Refuge and the National Petroleum Reserve.

Keep It in the Ground

As Greenpeace's Kingpins of Carbon report details, fossil fuel corporations have so far had great success at using the political system to advance their narrow interests. Oil companies receive millions in tax subsidies every year and corporations lease federal lands and waters on the cheap, while at the same time industry-funded groups like ALEC and the Western States Petroleum Association work overtime to pass legislation that attacks renewable energy and props-up fossil fuels.

Thanks to this dirty money influence, time is now running short to limit greenhouse gas emissions enough to limit global warming to 2 degrees Celsius. President Obama has the power to keep fossil fuels in the ground by imposing a moratorium on federal leasing. He should make the most of his last year in office and leave behind a legacy that the world truly needs now.