Are you one of those people who have those, "Shit! I'm-suddenly-naked-in-the-middle-of-the -street-and-everyone-staring-how-did-I-get-here anxiety dreams?" I am.

And unlike some of my anxiety dreams--which range from "I've forgotten the lines to the play I'm starring in," to intense cheating dreams where I've betrayed someone I love--this one is all about shame.

Shame that I'm naked in front of strangers. Shame that I'm the subject of ridicule. Shame that I'm not in control of how people are seeing my breasts, my tuft of pubic hair. Shame that my body exists. Nakedness--when it's not for someone else to enjoy--isn't something we celebrate. Without sex, we're told, the human body should remain in the shadows.

But Paulette Leaphart is on the cusp of changing that. Today she'll embark on a 10-week, 1,000-mile journey from Biloxi, Mississippi to Washington D.C.--topless--showing the world that her double mastectomy scars are anything but shameful.

Paulette is a woman of intense faith, she's been in dialogue with God's voice since she was a child; she attributes her survival from an abusive and tumultuous past to a vow she made when she was just six years old.

"My faith is the reason why I didn't die as a kid. My uncle had just beaten me for something crazy, and I was saying over and over to myself, 'I want to love kids, I want to love kids, I don't ever want kids to hurt.' I made God a promise. If he let me live, I promised him that when I grew up I would build this big house and take in all the babies. I grew up and built a 7,000 square foot house. I said for every child I birthed, I would adopt one. So I have eight children. The oldest is 30 and the youngest is eight. God kept his promise and I kept mine."
paulette5

In 2014, Paulette says she woke to God's voice telling her she had cancer in her breast.

She sought out a doctor who said he felt nothing abnormal; the mammogram didn't show anything either. He told her to come back in six months. "I said, 'I'll be dead in six months.'" Paulette insisted on getting an ultrasound; the results revealed a small but aggressive tumor in her right breast. The doctor explained they strongly recommended a double mastectomy.

"I was devastated," she says. "I was not prepared for that news. I was a woman who took pride in my femininity and my looks and my sexiness. I'm a single mom--I felt like I still had some rubber left on my tires." 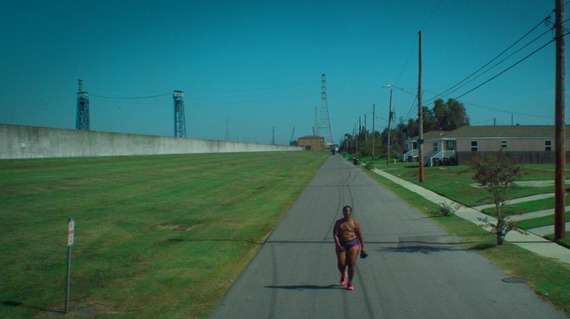 But then her doctor explained she could have reconstruction surgery. "'We'll give you some new ones!' he said. And that calmed me down. Can I pick my size? Can I get some that stand straight up? He told me we can do the surgeries back-to-back, so when I woke up, I'd have me some new tatas. I was excited about my breasts!"

But Paulette's relief was short-lived. The doctors soon discovered that she was on blood thinners for a clotting disorder and they felt it was too dangerous to give her implants; she could bleed behind her new breasts and then have to have them removed--the risks were simply too high. 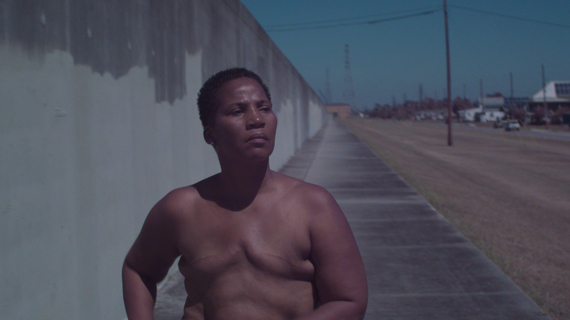 "They told me, 'I don't want to put you through that!' But my mind wasn't trying to hear that." Paulette's mind raged against her own body. "What am I gonna look like if you take my breasts off?! What is a woman with no breasts?! I couldn't wrap my mind around it. They offered me prosthetics, but that felt like I was putting on a costume every day."

Paulette says that following the surgery, she entered a deep depression, grew reclusive, and couldn't bear to confront her body. "I didn't want to see it or look at it. I couldn't talk about it."

After eight months of chemotherapy and healing, Paulette headed to the beach with her five daughters. It was Labor Day weekend 2014 and God spoke up again. This time he asked Paulette to remove her shirt on the beach and take pictures of her chest.

Paulette took her top off and asked her daughters to start shooting: 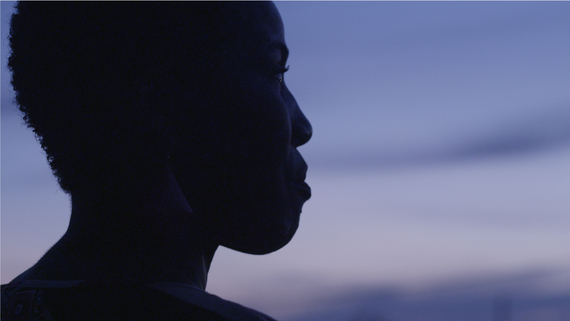 When Paulette got home that night, her daughter told her she should post the pictures on Facebook. "She said, 'you know how many lives you can save?!' I thought about it, and decided that people need to know what this looks like."

When Paulette woke up the next morning, her photographs had gone viral; responses were pouring in from people applauding her bravery, her beauty, her ability to shed the shame of breastless women, women who bear their pain where everyone can see it.

"A man wrote me and said, 'I haven't seen my wife without her shirt since she had her breasts removed seven years ago. She saw your photographs and she screamed and she called my name and I went running to see what was wrong. She said, look! And pointed to the computer.'

And I got hundreds of stories of like that."

Paulette began her journey back into her own body slowly, but surely. She began taking small walks around her neighborhood topless, flexing her newfound nakedness. "At first my neighbors are looking at me like I've lost my mind. They're thinking, 'what in the world?!' And then they got used to it. And I got comfortable with it too."

Then God told her she should walk 1,000 miles with her shirt off. And then fate knocked--loud and clear upon her door. "I was standing in my kitchen cooking--I live by the levy--and I saw it."

Sasha Solodukhina--the producer of "Scar Story"--was filming footage for the anniversary of Katrina right outside Paulette's home. "God said, 'There's your crew--they're the one's that are gonna document your walk." 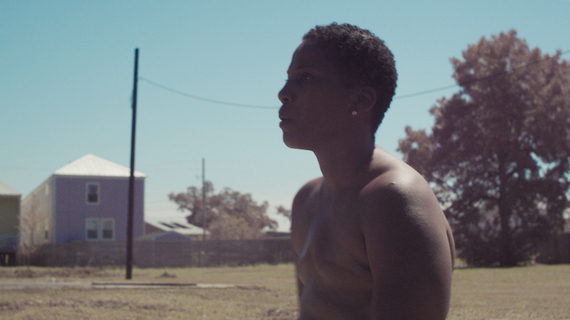 Paulette approached Sasha. "I said, 'I got a powerful story and I need somebody to document it.'" Sasha told Emily Mackenzie (her longtime collaborator) about Paulette's pending journey, and the rest is history.

Not only are Sasha and Emily documenting Paulette's walk for a feature-length documentary slated to premiere next summer, they're also collecting scar stories from people all over the country through video, art, and written submissions; this mosaic of stories will be published on their website.

"The idea with the scar stories is that these scars extend far beyond the physical," says Emily.

"Paulette had a terribly traumatic childhood, she says she was, 'born uncelebrated.' She talks a lot of about emotional scars, about dealing with trauma--and she finally had a reckoning. To be a whole person, she has excise these secrets. We all have our shit. We all have this stuff we carry around--we don't even have a choice, but we carry it."

Emily also explains that this film is highly unusual. It's an intense labor of love; the entire six-person crew has decided to defer proper compensation for now. It's simply too important a story not to tell.

"Unless you have deep pockets or a long track record, it's so hard to fund these kind of films," says Emily. "It's an exercise in willpower. But we're die-hard devoted to doing it; we're in for the and adventure and the journey and the personal experience. Everyone is in it for making more than just a movie." 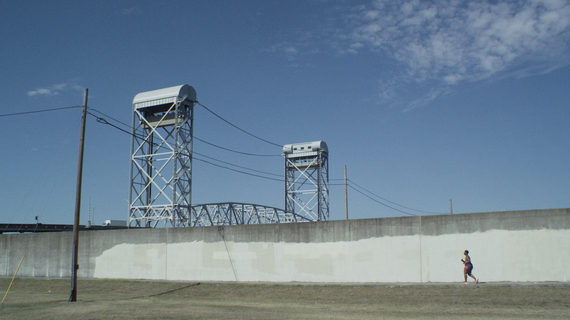 Paulette's been training for over a year now, walking 30 miles a day. By the time she reaches Washington D.C. she will be 50 years old. When I asked her why she's walking, her response was simple yet intricate--it's a filigree web. Her walk is a physical manifestation of her own scar story and a public denunciation of a society that keeps women cowed and contrite, one that keeps all of us in a long dark shadow of shame.

When she heard there were auditions for a top secret video by a "very big star," she took her 8-year-old daughter Madeline to audition--but took the opportunity to show the casting director the trailer for 'Scar Story'--who in turned showed it to the one and only Queen Bey, who decided to feature Paulette in the section of 'Lemonade' entitled, what else, 'Hope.'

"I want to empower women. I want to help give women faith. I want them to understand that with faith we can get through anything, I don't care what it is. I want women to know their pain has purpose. Believe you're beautiful because you are. Breasts don't make us, but I had to learn that. It's something that society feeds us and we got to change that. I have five daughters and I tell them all the time: 'I don't care what anybody says, you define your femininity. You define your beauty. Be happy with you are. The world is going to try to tell you you're not beautiful--they're gonna try to break you like they tried to break me. Society tells you who's pretty and who's not. To hell with society--and that's why I'm walking."

This story originally appeared on The Establishment.

Related Stories: I'm A Sex Worker Who Was Raped, Here's Why I Didn't Fight Back

The Dirty Politics of Period Sex

The Dangers Of The 'Post-Abortion Syndrome' Myth