High on its own island, floating on Lago Titicaca, is a towering white cake of a building: the five-star Libertador Hotel, its hundreds of windows blinking quietly in the sun. From these windows, at sunrise, one can see shreds of orange-red on the marsh while birds fly back and forth in the cold silence: a silence as wide and mysterious as the lake itself. An end-of-the-world hush surrounds the island.

"Was this built over a cemetery by any chance?" I joked to the manager, down in the lobby by the glass electronic doors.

He blinked. "Well not exactly ON a cemetery. Although, of course, the Inca cemetery is on this island...."

As are other layers of history, buried as well. It turns out that back in Conquistador times, the Spanish used to intern Indian prisoners on the island; later, in the twentieth century, a military president made it the site of an army base.

And today, in the same building, one can sit by the fire in the sunken lounge with a chilled pisco munia (a delicious herb cocktail) or enjoy the prime delicacy of the lake--the kingfisher fish--broiled with a vodka cream sauce.

It is interesting to lie on a big white fluffy bed and peer through the windows at the birds pivoting in the bluish mist, and wonder about those, years earlier, who peered at the same view. But the true highlight of coming to Lago Titicaca--the biggest lake in South America, bordering Peru and Bolivia--is to see something that cannot be seen anywhere else in the world:

Tourists pile in big motor-boats to plow through the weedy blue water and arrive at what looks like hay (tortora weeds) growing wild in the sun: tiny hay islands floating in the middle of the water, with huts and boats, and even a wind-mill, twirling in the breeze, made of the same spun gold. Pink flamingos offset the monochrome.

It is as if the girl spinning hay in the fairytale "Sleeping Beauty" had gone wild one night and spun, in a hallucinatory vision, a universe of yellow.

One steps onto one of these islands and squoosh! One's foot sinks and bounces up in the hay ground, slightly wetted.

"It's like walking on a mattress," said one of my boat-mates.

And like a mattress--or a particularly thick one--the hay island is about a meter thick. Under it: water.

"When we sleep at night," said one of the inhabitants, welcoming me into her hut (made of hay). "We wake up wet." The wetness seeps through the hay into the blankets.

Indeed, many of the few hundred inhabitants strewn on these hay islands suffer from rheumatism.

These islands were invented a few hundred years ago, by the Uros Indians escaping from the Inca invasion (according to some legends). The refugees first lived on rafts, and then decided to "build" islands: taking sod and hay, molding them together and then anchoring the whole thing to the bottom of the lake with a rope.

"This way if we don't like our neighbors on other islands, we can just cut them loose," joked one native.

It was a prepared joke, as prepared as the tour of the islands itself. Today the Uros people--at least those on the main Islas Flottantes (nine inhabitants on each)--live from tourism. The women gather in their colorful clothes at the yellow edge of their islands, greet the European tourists with big curtsies, and then regale them with songs: like "Row row row your boat" and "My Bonnie Lies Over the Ocean."

It is a bit painful to hear "Row Row Row Your Boat" a half-dozen times, sung by the littlest Ayamara-Uros girl to the oldest, knowing that rather than by education and industry--or native crafts--today's Indians live by pleasing the boatloads that pass.

Today each little hut also has a tiny television. When Fujimori was president, one of his contributions to the country was to bring solar panels to these tiny islands, a moment of modernity that is much appreciated by the inhabitants who remain. Few do remain, however, as the children--stymied by the lifestyle--tend to go mainland, first for high school, and then for jobs.

Yet I did meet the most ancient inhabitant, a shaman, aged 97, who performed a "healing" ritual for me, as I was suffering from bronchitis.

He touched my chest: "Your heart has moved to the right," he said. "We must move it to the middle, where it belongs."

He took me in a woman's hut, and sat down crosslegged and began my healing. He drank deeply from a bottle of sprite, filled with brown murky spirit water, and chanting, he spit it in his hands--a dark tobacco brown liquid--and then rubbed the spit all over my arms, then my torso, pressing in to inspire my heart to move back to its right place.

Although a bit dismayed by the brown stains appearing on my white t-shirt (the pungent sweetish smell was strong!), I did feel a certain breathy liberated sensation, and something did seem to move, especially when he took a scarf and tied it around my forearm, yanking my torso straight.

Asking me to complete the ceremony, by swiveling a drop of the Sprite spirits myself, while he chanted a benediction, he smiled and said I was back in balance.

Then off I went in the motorboat to another island, this time to a "real" one with reddish cliffs and sheep paths: Taquile, the home of the Quechua Indians for thousands of years (and once a Spanish military prison as well). Here, the Indians had their own schools and buildings, their own native crafts and culture, independent, it seemed, from the mainland.

The local men greeted us under the olive trees overlooking the blue "sea", and brought out their native crafts: hooded woven hats, the red ones signifying marriage , the white, the single ("half-empty") state.

Here, I learned, native ceremonies do still take place: such as a Mama Pacha celebration in the little Catholic chapel on the hill, conducted during a full moon, with coca leaves, to summon the spirits of the mountains to bring peace and harmony to the inhabitants.

We ate broiled fish and delicious thick fried potatoes, prepared by the village women, and then--the group of us--trekked down the cliffs, over the rocks, and back to our boats. ... But perhaps the under-looked treasure of the area is Puno itself, a port-town, with hardly any tourists at all, but many animated shops on narrow streets radiating from the Plaza de Armas square. Here, I conversed with three women in bowler hats who ran their own weaving cooperative, having decided to bond together to fight for their market share. They taught me how to identify real alpaca from acrylic, rubbing their fingers on some woolen socks I bought. I also had my hair cut by a jolly girl in a beauty shop who rinsed my hair with buckets of cold water. She sang "Gloria" along with the radio as she clipped my locks, chatting from time to time with a fellow client with big yellow curls, fluffed high on her head, as families bustled at nightfall by the open door, clutching their children's hands.... 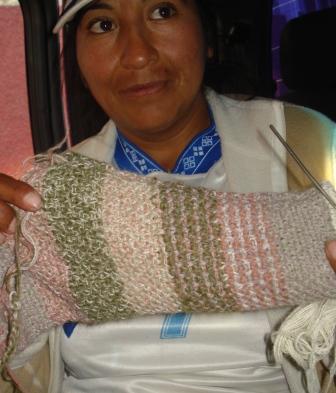