I came to Cambodia because of a movie: Rithy Panh's The Missing Picture, which won the Cannes Certain Regard prize last year. The film, the story of the director's search for the lost images of his childhood under the Khmer Rouge, was so powerful that I immediately contacted the director by Skype for an interview and six months later I bought a ticket. 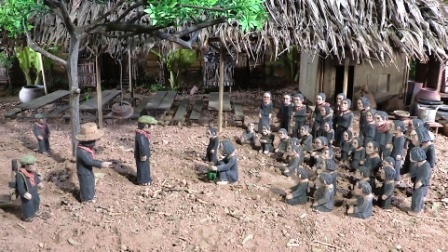 One in every four Cambodians was murdered during the rule of the Khmer Rouge, between 1975 and 1979. The Missing Picture tells the story of the genocide through a child's perspective, using clay dolls to recreate the director's memories and interspersing these personal scenes with actual footage. Rithy is the baffled adolescent doll dressed in a red shirt. The clay dolls -- including his father, mother and rocker brother -- are intensely human, with great emotional anguish in their carved faces. A clay Rithy fishes in a stream, with dejection etched in his eyes, while a vivid green rice field sways in the wind. Another doll has a screaming expression as her child dies. Indeed, the clay dolls seem to have more feeling than the people we see in the footage, in which both soldiers and victims seem eerily complacent, ready to shovel and bear heavy stones on their backs, as if animals.

The use of immobile dolls, with a narrative voice-over of a man remembering his boyhood in hindsight, is a brilliant move. The narrator's personal memories -- his humanity -- is the only way outside spectators can enter into this eerily incomprehensible world of evil. We are taken by our child narrator's persistent question: "why"? We are privy to his imaginative soul, wishing things would be otherwise. The child-narrator floats in outer space, towards a magical moon, inspired by the Apollo mission he has seen on television, and then lands back on earth, where he digs graves for cadavers.

The question of why -- the true missing image -- lasts with the spectator long after the film ends. So much so that I booked a ticket to Cambodia to find out -- and to find Rithy Panh. 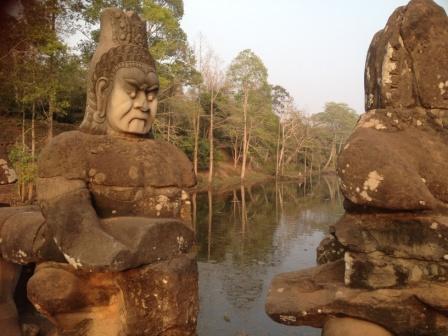 My first introduction to Cambodia was dust. I choked in the dust of the flat fields I passed, alongside the Angkor temples, every morning as I took a rickshaw to a school outside Siem Reap, to teach theater to a class of children. The brown dust floated in visible particles. I soon followed the usage of other travelers: a white mask over the face. My kindhearted rickshaw driver Pisal saw me choking and swung to the side of the road and bought me one.

The children loved the stories I read to them (with Pisal's help translating). They squealed at the story of "Piggy Pie"; they acted out with joyous waving arms the dismayed baby bear discovering Goldilocks. Hearing a story, I learned, was new for them. Books were rare in the classroom. At break-time, Pisal, my rickshaw driver-cum-interpreter, smeared white bread with sugar paste and gave it to them to eat. They ate the long loaves with hunger. 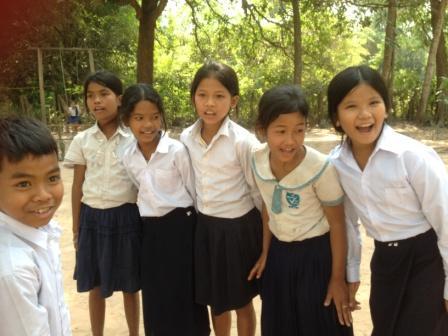 My students did not teach me anything about the Khmer Rouge past -- which ended (at long last) shortly before they were born, in 1998. It was not clear they knew much about it. Up until recently, the Khmer Rouge history was not taught in Cambodian schools. The director of the NGO I worked for explained to me that governmental policy was to keep the history at bay so as not to stir up anger. "The people today in town are the descendents of either the Khmer soldiers or their victims. Both live together side-by-side. Hence we need to forget," she said. "Otherwise the generations will continue to seek revenge."

Yet, in just two weeks in Siem Reap, I heard plenty of stories, all told in the same flat unemotional voice of the narrator of The Missing Picture. One roadside chicken seller told me about his parents "disappearing" one evening. The owner of a guesthouse told me how she had been dragged to a ditch to be executed for stealing a mango, but somehow survived and woke up in a pile of leaves. "I did not steal that mango!" she said. Later, in the town of Batambong, my guide to the Killing Caves, an affable man named Sammy, said that his mother had watched her two daughters starve to death, after her husband was shot in the head and then took Sammy, at that time a baby, and walked barefoot for weeks to the Thailand border to save him.

"She must have been depressed all her life!" I said.

"Oh I don't know," my guide shrugged. "She never spoke about her feelings. What was the point? It was normal. Everyone has a story like that."

I realized the power of Rithy Panh's film when meeting other tourists in Cambodia. I was searching for missing images. Most of them were heading for the Angkor Wat temples and the beaches on the islands. One Italian young man on a boat cruise past the "floating villages" asked me to remind him who Pol Pot was. Another tourist said she had come hoping to see "exotic Asia" and picturesque villages with old women in great straw hats selling fish in the markets. 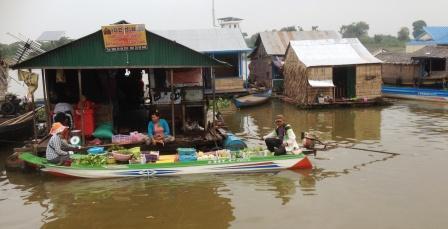 The "why" of what happened persisted.

I learned many theories. The most revelatory: the influence of the United States in causing the Khmer Rouge to come to power. During the Vietnam War, the US bombed the corridor in Cambodia used by the Viet Cong to move supplies. The four years of B-52 bombing left 250,000 Cambodians dead, and others confused and shell-shocked, accustomed to a chaotic violent world. Thousands became refugees. Meanwhile, their venerated king left the country for China.

"That was very important, the departure of King Norodom Sihanouk," explained a World Bank economist, who happened to be sitting next to me on the bumpy bus ride to Phnom Penh, my last weekend in the country. "The peasants were desperate, vulnerable, uneducated. They were extremely poor. They worshipped their King, like children worship a god. The country was ripe for a new leader who could restore order and national pride." Pol Pot, the Marxist upstart, promised the return to the times of Angkor, the period of glory in the Cambodian past (six hundred years ago), when the Khmer kingdom dominated south-east Asia (the only time it did) and had the wealth to create those famed majestic temples spiraling into the heavens, each sandstone stone carted miles by an elephant. During the Khmer Rouge period, ironically, these temples went to ruin.

As for the World Bank economist, he spent his childhood in a refugee camp. Now he works on the problem of water: few homes in the villages have running water. Instead, the peasants collect rain water from the roofs, which is unsanitary. Each house I glimpsed out the bus window had a large cistern in the yard.

I arrived in Phnom Penh. I saw the Killing Fields, a quiet oasis of grass and trees and ditches, where people had been shot in masses and buried. I saw the tree where babies were whipped across the trunk until death. I saw the former high school turned prison, Tuol Sleng S21, now a museum, where thousands were tortured with iron weapons. Photos of the victims line the walls, one after another, men, women and children. 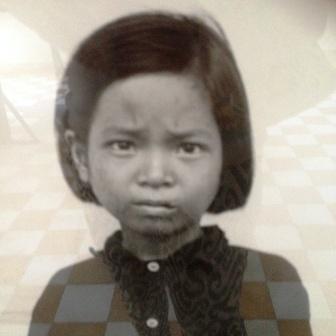 It is humbling to see how easily a whole country can turn south: how fragile humanity is.

I found Rithy Panh in his office on the second floor of the Bophana Center, an NGO he created in 2006. The Bophana Center is an audio-visual resource library with a vast data bank of films and tapes on the Khmer Rouge past, including international news reports, documentaries and fiction films made by amateur filmmaker King Sihanouk himself. It is also a training ground for aspiring young Cambodian film directors, with its own production studio.

On the walls were awards and diplomas the director had earned, including -- I learned with surprise -- an honorary doctorate from the university I teach at in Paris.

I recognized in him the sensitivity and intelligence I had seen in his film. He leaned across his dusty, book-filled desk to speak to me. 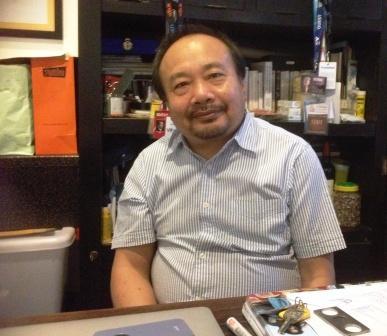 "I created this center to provide a space for Cambodians to be able to learn about their history," he told me. "It is only by reflecting on the past that one can create a better future. Today, Cambodians are reluctant to think about or learn about the past. They want to put it behind them. Nobody wants to see my films. They have heard all the stories already. But in ten years, they will be interested, and they will want to learn."

He noted something I had observed myself in my teaching in Siem Reap: "One great problem in Cambodia today is education. There is no book learning culture in Cambodia. People do not read. The children do not read in school. Educators must come up with a policy that meets the great need for knowledge: using modern audiovisual methods that the young can connect with. This is especially important since 60 percent of Cambodians are under 30 years old. " 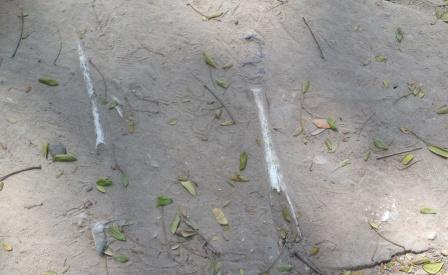 The phone rang. A group of international journalists wanted to meet the director, in the restaurant of an elite hotel in downtown Phnom Penh.

He shook his head and declined. "What's the point of meeting?" he confided. "Just to exchange a few words and take pictures? If they were really interested in what I am doing, they would come down here to my office, and visit Bophana."

He excused himself to go off for a shoot for his next film, up on the rooftop. The cameras were waiting. In this new film, he will take personal objects -- anything around him -- and spontaneously muse about the object live on camera. He picked up a pen on his desk, and turned it in his hands, to demonstrate. "See, every object has history," he smiled. "Even a pen. I will see what comes up from speaking about them."

His personal memories are as strong as ever.