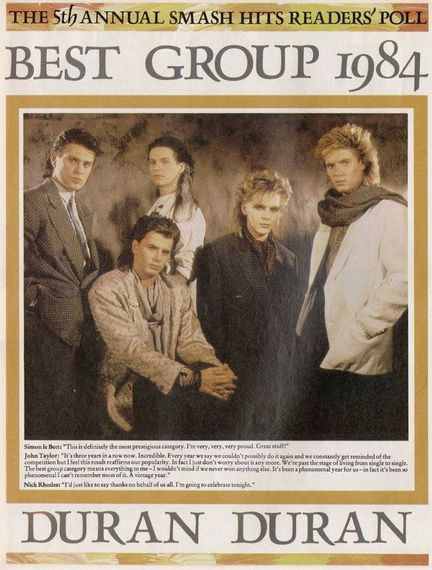 Duran Duran existed in my record player, my scrapbook and in my dreams at night. Like many teenagers in the 1980s, I had every inch of my bedroom wallpapered with their faces. Nothing was spared; even my piano was covered with pictures from Smash Hits. On that piano I taught myself to play Save a Prayer which, incidentally, sounds magical as a keyboard solo, although my musical prowess disappeared many years ago, along with my Duran Duran magazine collection.

Duran Duran Down Under

In 1984, they toured Australia and word had gotten out they were staying at the Perth Hilton. The day after the concert, with ears still ringing, throat raw from squealing, I dressed in my St Hilda's uniform and pretended to go to school. My friends and I took a bus to the city, snuck up the back entry of the Hilton and up the staff elevator.

Somebody had told us which rooms the band was staying in (yeh, right?!) so we took a bunch of love letters and shoved them under the doors that supposedly housed Simon, Nick, John, Roger and Andy. My letter to Nick read something like "I will love you forever," and after depositing it under his door (at best: a roadie, at worst: an anonymous businessman) we went downstairs where hundreds of girls were milling outside the tour bus.

Suddenly those divine men appeared, battling their way through the crowd and, (joy!) I managed to touch Simon's denim jacket with a fingertip. Alas, Nick was too far from me; but at least we were breathing in the same West Australian air. Next, we jumped in a cab and followed the tour bus to the airport; my friend Cathy crying all the way. "I wouldn't be this hysterical if my wife left me," said the taxi driver.

What You Wish For

Imagine telling my teenage self that if I was very patient, when I'm in my late 30s, I would meet the idols of my youth.
Duran Duran: Twenty-four years later, 85 million-plus records later.
Me: Three sons later, a long career in journalism later.
It finally happened.
On the Sydney leg of Duran Duran's world tour, I had the opportunity to interview Nick Rhodes and Roger Taylor. Would they live up to my expectations? Would being up close to them confuse me so much that I revert to my teenage self and faint or, God forbid, scream?
Butterflies in the stomach. But when they walked into the room, I didn't keel over -- instead I was struck by a pleasant rush of familiarity. (For them, of course, I was just another news hack. Yet, they were sweet and polite, agreeing to pose for a photo with me, which must have been "thrilling" for them.)

I asked Nick and Roger how they've been able to reinvent themselves over the years -- they first formed in 1978 -- and the impact of fame on their lives. After all, Rhodes was only twenty when they hit the big time.

"My parents had to move house. On my birthday one year there were 400 people outside our house in this tiny little street. It was ridiculous! One girl came from Dallas, Texas and arrived with her mother. Well, I wasn't even there!" he laughed.

"Fame opens a lot of doors but when you get to the peak of fame it also closes a lot of doors. If you'd been interviewing us back then, we could not have left our hotel, we'd be locked away. There would be up to a thousand people out the front," said Taylor. Yes, I was once one of those people.

Most of us will never meet our idols, which is why the experience is so sacrosanct. My faith in Duran Duran was never rocked -- not in the way fans of One Direction might have their faith tested via the occasional sordid story. But if Duran Duran were at the peak of their fame today, things might be different. Thanks to the internet, bands are so accessible that fans are forced to see them warts-and-all, through messy divorces, drunken behavior, drug use, multiple girlfriends, or looking unkempt at the supermarket via a fans' smart phone -- stripping away the mystique. It's like trying to keep loving somebody after you discover there's a mad wife locked away in the tower.

Seven and the Ragged Tiger

As for Duran Duran, I'm glad I met them as an adult. If I had met them as a teenager, I would have been a blithering mess. But life moves on and feelings change. Still, as I spoke with Nick and Roger, I saw my teenage-self lovingly pasting their pictures into a scrap book with Seven and the Ragged Tiger blaring in the background. It was a dream come true. But it was also a stark reminder of how bewildering, how mind-altering the passage of time is. The teenage angst has changed, but the shiver inside is real. 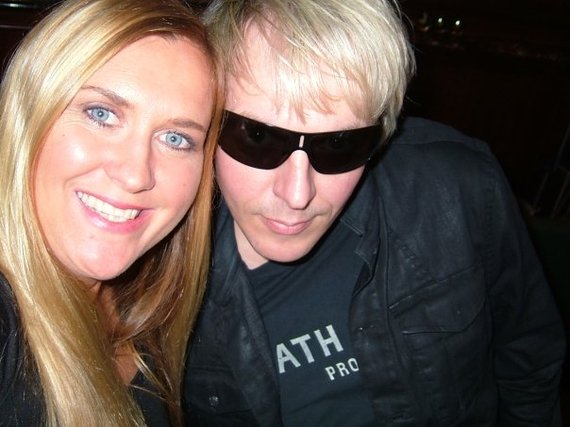 LJ Charleston is a journalist and author who has passed her love of Duran Duran's music to her three sons who all love Hungry Like the Wolf. Follow her on Twitter @ljcharleston