This summer, I've returned to Dharamsala to work with the Tibetan community in exile. When I arrived, I was excited to be teaching English again at the Tibetan Children's Village through the Lifeworks community service program. And I would also be interning for the first time at the Tibetan Women's Association, an international group focusing on human rights abuses and empowerment of women. But a few days after I arrived, things got even more exciting. I received a message: "Be at the Dalai Lama's compound by 11:30 on Tuesday. Don't be late. Bring your passport." I was going to meet the Dalai Lama?!

Before I left for India, an audience with the Dalai Lama had been requested through my Tibetan relatives. But I'd hardly dared believe it might actually happen. What a great honor it would be to meet such an amazing man! I admire the Dalai Lama for the work he does to spread awareness of the Tibet situation while maintaining his policy of non-violence and inspiring his people. He's adamant in portraying himself as a "simple Buddhist monk" but he's also an international symbol of peace and compassion, one of those rare leaders driven not by greed or lust for power, but rather by a genuine desire to help his people and everyone else in the world.

To get ready for my audience, I borrowed a formal red brocade chupa, the traditional Tibetan dress. On the big day, some of the Tibetan women I was working with helped me put it on, making sure it was tied properly and my earrings and brooch matched. Next they helped my brother Henry (who's also working in Dharamsala this summer) put on a men's chupa. Then he and I went out to get khadas to offer to the Dalai Lama and print some family photos of our great-great-grandfather and the 13th Dalai Lama to take with us.

At about 10:45, we headed for the Dalai Lama's compound. It was a sunny, brisk morning, unusual during the summer monsoon, and this seemed fitting for such a special day. We came to the tall, heavy gates of the compound and walked in clutching our khadas and photos, trying to follow directions without being swept away by the crowd. Everyone was going somewhere and doing something: getting out food, herding family members, praying quietly. The Dalai Lama was giving a teaching that was being broadcast over loudspeakers and translated one language at a time; when their particular language wasn't on people chatted, their animated conversations filling the air.

We were patted down and our bags searched at the security check. A guard escorted us to the reception office, where a tall, burly Tibetan man took our passports and told us to fill out forms explaining who we were and why we were there. Then we waited, along with a group of U.S.-based Tibetans and two Americans, a father and his teenage daughter working with a Tibet NGO in Washington, DC. Everyone was fidgety, making polite conversation to pass the time and--for me anyway--calm our nerves. My chupa had been ironed but I still smoothed away imaginary wrinkles in the deep red fabric. I folded and refolded my khada. By the time we were finally called, the slow fan on the ceiling must have rotated a thousand times.

We were shepherded through another security checkpoint and then taken outside to a line snaking down the hill from the Dalai Lama's official residence, a low building decorated with traditional bright Tibetan colors. Most of the people waiting were Asian and looked like tourists with their sun visors and fanny packs; there were also a few Westerners. When we saw the people ahead of us start putting their khadas around their necks, we did the same. The moment had finally come!

The line moved fast, and as we got closer I saw the Dalai Lama. Dressed in his simple maroon robes, a serene expression on his face, he was just standing at the entrance to his residence shaking each person's hand and posing for pictures. He really did look like a simple Buddhist monk.

When our turn came, the Dalai Lama smiled at us, took our hands, and said hello in his deep, gentle voice. We showed him the photos and, pointing to the one of my great-great-grandfather, he said, "I have seen that picture." It was at that moment that I recognized why we were there. The Dalai Lama held the photos, and held our hands tightly, and we posed for his official photographer. One hundred years after my great-great-grandfather was with the 13th Dalai Lama in India and Tibet, we were holding hands with the 14th Dalai Lama. I felt as though our family's story had come full circle, as if we'd fulfilled some sort of destiny.

The Dalai Lama thanked us and we thanked him. In a daze, we walked down the hill, past the security checkpoints, out the gate, and into the busy streets of Dharamsala.

When I look back on that morning, it seems unreal, like we were in a play or a dream. What I remember most is when the Dalai Lama took my hand. His hands were so soft and his grasp so firm; it was a comforting hold, confident and kind. Imagining my great-great-grandfather walking away from the Potala Palace in 1920 after his audience with the 13th Dalai Lama, I can understand the awe he felt, the sense that your life has been greatly altered and bettered from meeting one of the most inspiring men the world will ever know. 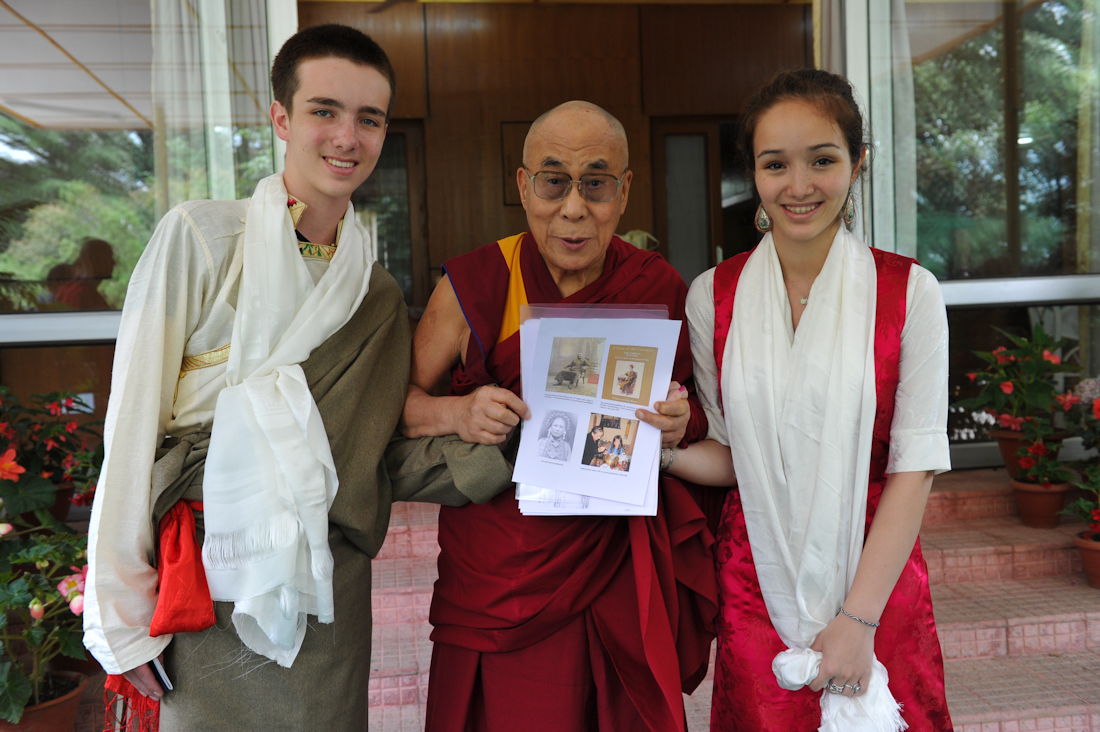 Junior at Vassar College, currently studying at Sciences-Po in paris