On Monday, astronomers from the Harvard-Smithsonian Center for Astrophysics said they had identified a new type of planet previously unknown to science. The "mega-Earth," as it has been dubbed, shares several similarities with our planet, possibly including the potential to support life.

"This is the Godzilla of Earths!" Dimitar Sasselov, an astronomer at the center and director of the Harvard Origins of Life Initiative, said in a written statement. "But unlike the movie monster, Kepler-10c has positive implications for life."

Located about 560 light-years from Earth, Kepler-10c is a rocky planet with a diameter of 18,000 miles (as compared to Earth's 8,000-mile diameter). But what makes the planet so special is its mass. 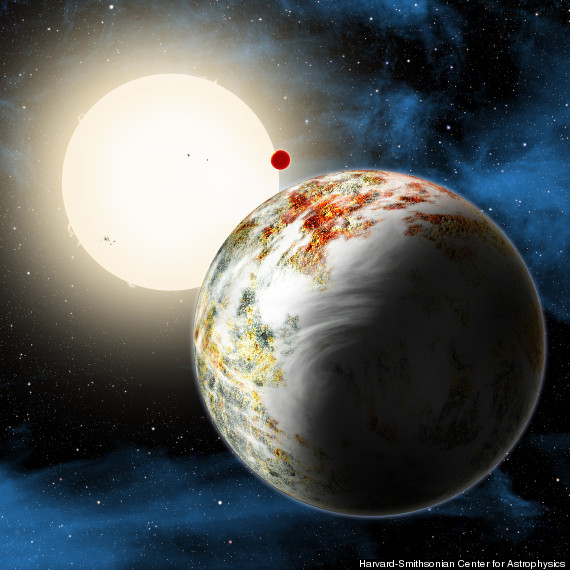 An artist's illustration of the newly discovered mega-Earth, Kepler-10c, with its sister planet, Kepler-10b, in the background. (Image credit: Harvard-Smithsonian Center for Astrophysics/David Aguilar)

Seventeen times more massive than Earth, a planet of that magnitude should not exist as a solid celestial body -- or so scientists previously thought. They believed that a massive planet like Kepler-10c would be composed of hydrogen and gas, much like Jupiter and other so-called "gas giants."

"Kepler-10c is a big problem for the theory," Sasselov told Discovery News. "It’s nice that we have a solid piece of evidence and measurements for it because that gives motivations to the theorists to improve the theory."

The discovery of the massive rocky planet may also change our understanding of the history of the universe. The Kepler-10 system is believed to have formed less than 3 billion years after the Big Bang. Since the early universe contained hydrogen and helium but very few of the heavy elements that make up rocky planets like Kepler-10c, it's possible that the mega-Earth was able to arise even though the required ingredients were limited.

"Finding Kepler-10c tells us that rocky planets could form much earlier than we thought," Sasselov said in the statement. "And if you can make rocks, you can make life."

Astronomers first spotted the mega-Earth in the Kepler-10 system in 2011 with the help of NASA's Kepler space telescope, which is charged with searching for exoplanets. Though researchers were able to determine Kepler-10c's size and orbital period at the time, it wasn't until recently that they were able to analyze the planet's mass and chemical composition.