Megan Fox is one proud mama!

The actress stopped by "The Ellen DeGeneres Show" for an interview airing Monday, May 5, and shared photos of her two sons, Noah, 19 months, and Bodhi, 11 weeks.

"Bodhi is the little chubby one and then Noah is the one with the lips. Hashtag no fillers!" she said, pointing to some pictures of the boys with her husband Brian Austin Green. 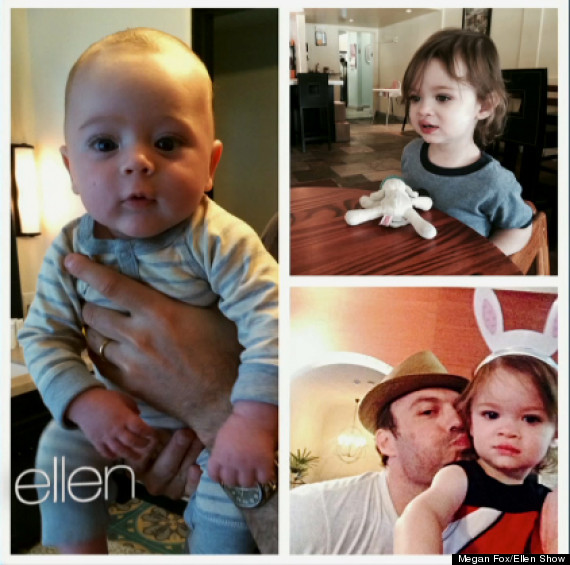 "The first time I was here, I was pregnant and no one knew it and then the second time I just had my baby, but I got pregnant again, so you're sort of like a fertility good luck charm," the 27-year-old told DeGeneres, who joked that her show was an aphrodisiac. "If you want to get pregnant, come see Ellen," Fox added.

The actress also discussed her new movie "Teenage Mutant Ninja Turtles," which she filmed while pregnant with Bodhi. And that whole pregnancy thing didn't make movie-making any easier.

"I got pregnant with Bodhi two weeks into filming 'Ninja Turtles,' which is an action movie and requires a lot of running and jumping and stunts. So anyone that's been pregnant knows the first trimester can be pretty rough and your nauseous all day long, so I spent the whole shoot ... clinging to a box of Saltines," she explained. "And we kept pickles in the refrigerator for me and I was just constantly on the verge of vomiting."

As for whether or not baby number three is on the way, Fox made it pretty clear she's ready to take a little break. Although, she's never actually planned a pregnancy.

"The first one wasn't planned either," she said when DeGeneres asked if she planned to be pregnant during "Ninja Turtles," joking, "I mean, we can't let Brian near me anymore."