NEW YORK -- Megan Fox has incredible handwriting. She said as much Monday night when a reporter asked her whether she knows how to write with a pen.

"Do I know how to write letters with a pen and paper?" Fox asked. "I do. I actually took calligraphy class in high school and have kind of incredible handwriting."

Fox collects a number of similarly idiosyncratic interests that align her more with an eccentric old soul than a 25-year-old sex symbol -- the list also includes astrology, "Lord of the Rings" trivia, Chinese herbs (she takes them for anxiety), and a preference for marriage over dating (she wed actor Brian Austin Green in 2010), all of which came up in seven minutes of conversation with The Huffington Post and other media during the intermission for "24 Hour Plays," Fox's Broadway debut.

Fox is best known for her uneven success in the "Transformers" movie franchise and her frequent gracing of the sexiest-women lists in men's magazines. Most recently, she channeled Elizabeth Taylor in an ad for Armani cosmetics. Slim but athletic, she was dressed down in jeans, a gray sweater and slouchy boots for her Broadway debut.

Calling "24 Hour Plays" her debut, however, is almost a misnomer. As a one-night-only benefit show, it's more of a one-off than the launch of a stage career. "I don't have the stomach for [the stage]. It takes a very brave, courageous person, and I'm too neurotic," Fox said. "I wouldn't survive an entire run of a play."

But she survived the full 24 hours Monday night at the American Airlines Theater. Unlike some of her fellow actors, who used Absolut vodka to calm their nerves, Fox (who doesn't drink) stuck to her Chinese herbs. Why was a group of established actors -- including Jesse Eisenberg, David Cross, Rosie Perez and Michael K. Williams -- so terrified? Consider the show's premise.

The "24 Hour Plays" -- a show sponsored by Montblanc to benefit the Urban Arts Partnership -- teams up writers, actors and directors for 24 hours, during which time they have to create six plays, to be performed on Broadway the following night. Twenty-four hours to write, direct, memorize lines and act, all for an audience hoping to see you break character. That is, after all, part of the voyeuristic fun of it -- the chance to see big-name Hollywood actors at their most vulnerable.

Fox's play, "The Maid," is a surrealist comedy featuring Sarah Silverman and Fox as rabbits, Paul Bettany as a high-maintenance millionaire, Jack McBrayer essentially reprising his role on "30 Rock" (this time as a maid) and Tracy Morgan in a cameo as Tracy Morgan.

Before the show, actors had a chance to express their stage strengths to the writers, and Fox voiced an interest in comedy. "I definitely, for live theater, would prefer doing comedy as opposed to something heavy and dramatic, because I just don't have the nerves to pull something like that off," Fox said.

The actors were required to bring a prop with them to the theater, which the writers could integrate into the script. Fox wanted to bring Sting, Frodo's sword from "Lord of the Rings," but foresaw trouble at LAX and settled on a Bop It. Her prop didn't end up in the play, but it did display her sense of humor, which she cites as one of her stronger points: "Everybody that knows me thinks I'm funny."

Even in the ideal comedic situation, however, Fox's nerves are more on edge on stage than on a film set. "If you mess up, you sort of mess up everyone else's experience as well, and you can't reset," she said. "It's frightening."

What did help was knowing that putting on a play in 24 hours made everyone involved uneasy.

"Everyone is so completely terrified, even the people who have done it several times," Fox said. "But I was really impressed with how very relaxed Sarah was, and obviously I don't think Tracy's ever been nervous in his life."

As for Fox, her most relaxed moments in life come "when [she's] not PMSing or ovulating -- those two weeks in between."

"I hate doing the red carpets," she said. "It's all about what you're wearing and how you look, and I don't know anyone who's super comfortable and confident in doing that. I mean I do know a few people, but it's not the norm."

Shortly after Monday night's carpet -- which, counterintuitively, took place following the show -- Fox disappeared, while some other actors lingered for the after party. Eisenberg, Perez, Diane Neal and Gabourey Sidibe were seen on the dance floor at B.B. King Blues Club and Grill in Times Square, where the bar served potato chips, the DJ spun tunes from Stevie Wonder ("Sir Duke") to Jay-Z ("I Just Wanna Love U (Give It 2 Me)"), and overwrought actors could finally breathe easy. 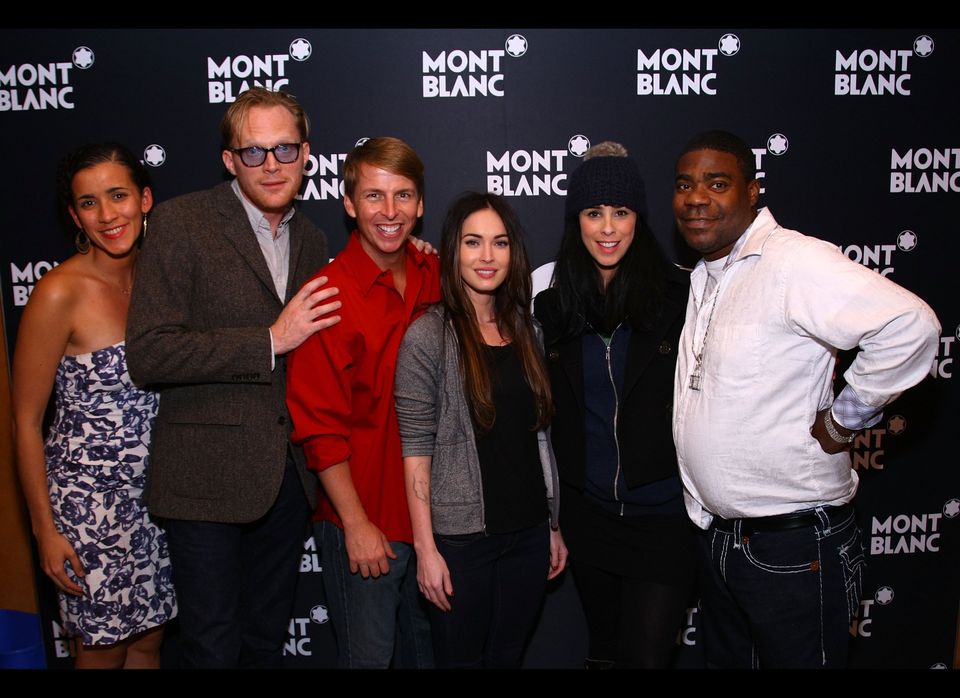