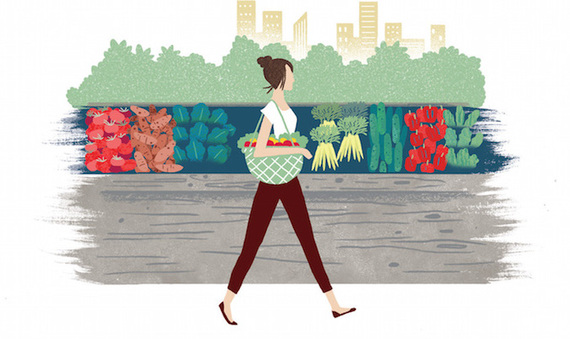 Tucson, Arizona-based author Megan Kimble spent a year eating only whole, unprocessed foods and wrote a book about it. Unprocessed: My City-Dwelling Year of Reclaiming Real Food is the Edible Baja Arizona managing editor's first book and memoir and explores what eating unprocessed really means, why it matters and how to afford it. I talked to Megan about how the experience has changed her relationship with food.

Read the original at Impolitikal.com.

Why did you decide to eat unprocessed for a year?
I stopped eating processed food four years ago for a lot of reasons. There was the environment -- I'd come of age in an era when global warming was all but assumed, when natural resources were suddenly scarce and our food system increasingly dependent on fossil fuels. There were political reasons, as I considered the enormous influence food companies wield in our national politics. And there were economic reasons. I wanted to spend what little money I earned endorsing my local food system, one that I hoped was visible, accountable and scalable. I was also broke, tired of reading about what I should do. I wanted, instead, to explore what I could do, given limited resources of money and time.

Did you have someone helping you research how to reduce your intake of processed foods, or did you "make it up" as you went along?
I'd done a fair amount of research about processed foods prior to starting my project. Initially, eating unprocessed appealed to me because it was something quiet and personal I could do, on my own terms and in my own kitchen, without inflicting yet another dietary restriction upon the world. But as I quickly realized how little I knew about how plants, animals and minerals become food, I ventured out into my community to figure out the answers. I didn't know how wheat became bread, so I interviewed a miller. I researched supermarkets, visited with beekeepers, brewers and vintners, and evaporated salt from the sea. I was raised by two vegetarians, so, to reckon with meat, I slaughtered, butchered and processed a sheep.

Were there any foods that were particularly hard to give up?
Refined sugar was by far the hardest food to give up -- notably because I have a raging sweet tooth. And also, sugar is in everything, from mustard to marinara sauce, deli meat to salad dressing. I didn't think I could make it a year without chocolate -- which, if you buy it at the store, always has refined sugar and usually some sort of emulsifier -- so I learned how to make my own chocolate using cacao butter, powder and local honey.

Refined flour is another tricky food to avoid, partly because it's so hard to detect. Even grain products that say "whole-grain" on the package also often contain some portion of refined grains. That's why it's important to always read the ingredient label!

It's easy to imagine eating unprocessed being difficult to keep up in social scenarios, but did you experience some benefits socially?
Absolutely. Because I didn't know exactly what made food processed, I had to venture into my community to talk to those who processed foods -- people who I continued to see around town, who I continued to interact with, many of whom eventually became friends. Eating unprocessed rooted me in my community in a way that was surprising, and wonderful.

Why do you think it's important to buy and consume locally produced food?
According to a study by Local First Arizona, a local business coalition, if everyone in a community the size of Tucson shifted just 10 percent of their spending to a local business -- a 10 percent shift, not an increase -- together we could create almost $140 million in new revenue for our city. What that means is that, by spending money locally, we create local prosperity. When we spend money on food produced somewhere else, by someone else, that money doesn't come back to us. Often, it ends up on the balance sheet of a corporation that then uses it -- our money -- to influence food politics.

Read the whole interview at Impolitikal.com.