Somewhere in Estonia, amid the lush green leaves, encroaching moss and dark bark of the country's forests, is a massive megaphone. Made of beautifully finished wood, the giant horn sits beside two others of its kind, each pointed in a different direction, looking as though they are ready to project, or perhaps capture sounds from different corners of the woods. Large enough for an onlooker to climb inside, the idyllic carvings look like the remants of a centuries-old fairy tale; the one bits of remaining evidence that something magical happened between the trees.

Alas, the megaphones are not hundreds of years old artifacts, left behind by the Vikings of yore. Instead, they are new works of art courtesy of the student architects at the Estonian Academy of Art, nestled into the gorgeous setting of the Pähni Nature Centre, near the border with Latvia.

The project was inspired by the Estonian author and semiotician Valdur Mikita -- a man who declared his desire to build the first "forest library" in the world. With Mikita's ambitions in mind, the Academy sent students into the woods to explore what "reading in the forest" really means. But according to Hannes Praks, the project's leader, the idea of "reading in the forest" quickly morphed into something else entirely, thanks to a chance encounter with a lost grandmother.

"In the initial stages we sent the students into the forest for a few days, to look for input and inspiration for a possible concept," he explained to The Huffington Post. "The forest seminar failed utterly, because after half a day of intellectual chatter, a helicopter started to circle the forest and a moment later, the woods were filled with the police."

It turned out that a local grandma had gone mushroom picking in the same stretch of woods, losing her way among the dense trees. So the students spent the rest of the seminar helping the police look for the lost woman.

"It was raining cats and dogs, and the mood was rotten. The search operation had failed and the granny remained lost," Praks said. "It was only a while later that we found out from media that the granny who had spent over 24 hours lost in the forest had returned home, complaining only of a stuffy nose."

As insignificant as the story may seem in relation to the mammoth megaphones, Praks believes the incident became the impetus for his students' eventual project. He cites a particular student named Birgit Õigus, now credited as the author of the megaphones, who decided to imagine not physically reading words in the forest, but reading sounds -- like the cries of people looking for a lost woman.

"This declaration saved the project," Praks said. 'The symbolic shape of the megaphones helps the user to focus and listen, but -- it can also be used in reverse, to amplify the sounds you make yourself. If you shout into the narrower end of the megaphone, you could also call out for a lost mushroom picker."

The students worked with acoustic engineers, experts who could guide the location and shape of the megaphones to enhance the sound production. But Praks explained that a "unique physical listening experience" was not his students' first priority. "The project is very contextual and planned specifically for the Estonian forest," he added. "It might sound a bit esoteric, but it seems to me that, yes, we did spend time on acoustics and sound movement engineering, but not so much to affect the parameters of the object, but rather to open up the soul of the user."

The megaphones work just as well as amplifiers as they do shelters; dwellings that are able to accommodate hikers who might need temporary protection from the elements. "Once inside the megaphone, the hiker would see a wide view of the forest, while the narrower end of the object focuses on a bush of blueberries," said Praks.

During the unveiling of the megaphones, the structures functioned perfectly as tiny stages, in which two of the megaphones housed performing musicians, with the audience sitting in the middle of the installation. "In my opinion, you could perceive a powerful yet serene and clear stereophonic and acoustic effect," Praks noted.

Since the project's opening, the megaphones have become somewhat of a landmark, showing up in Facebook profile pictures across the small country of Estonia, 50 percent of which is covered by forests. While most of us outside of Europe might not have a chance to see the megaphones in person, Praks sent HuffPost a generous selection of images that let us digitally experience the installation.

For those adventurers in the area though, Praks gave us the following, perfectly mysterious instructions for finding the megaphones: "It’s the furthest you can go in Estonia, from the capital." 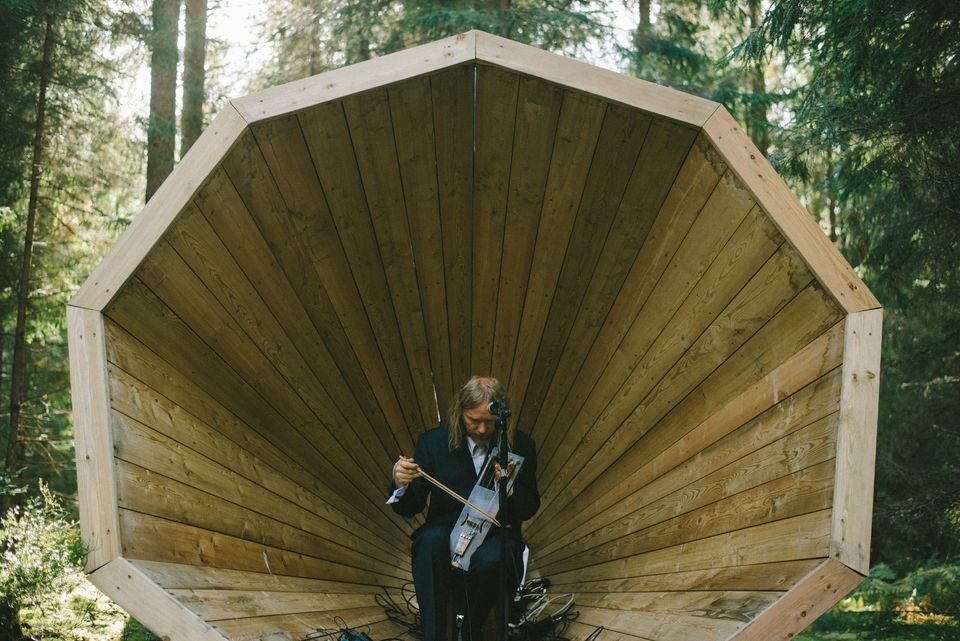