If the title of Selfish, Shallow and Self-Absorbed: Sixteen Writers on the Decision Not to Have Kids sounds confrontational, that’s likely not an accident.

If you grit your teeth at the idea that people of European descent should try to procreate to remain in the majority, or if you resent the implication that your life is dull and limited if you choose to have children, or if you are infuriated by the accusation that parenthood makes you antisocial or selfish, there will be passages in Selfish, Shallow and Self-Absorbed that will provoke the urge to hurl the book across the room. (Try to refrain.) “These are serious writers, and I’m not going to censor them,” says editor Meghan Daum of the sometimes “enraging” essays in the collection.

It’s this commitment to honesty that also creates room for moments of profound vulnerability and revelation. Daum, the acclaimed essayist and author of last year’s The Unspeakable, deplores how often the childless-by-choice hide behind glib lines and jokes -- e.g. “Why have kids? My shoes are my babies!” -- rather than opening up about the complexity of their attitudes toward parenthood. Those shallow conversation-changers are nowhere to be found in this searing collection.

Instead, we hear from one author who chooses not to have kids after a fear-filled childhood that left her struggling to effectively nurture herself, let alone a family. Another admits that the advent of her brother’s daughter means mourning the loss of their tight-knit sibling bond. One man concedes that he’s hesitant to have a child who would grow up with the middle-class advantages that are anathema to his political sensibilities.

Daum herself didn’t include a story of choosing childlessness in the collection, but poignantly narrated her own experience in The Unspeakable’s “Difference Maker.” She writes of knowing that she doesn’t want a child, but struggling to admit this even to herself. “It was possible,” she muses, “that nothing, not a baby or lack of a baby, not a beautiful house, not rewarding work, was ever going to make us anything other than the chronically dissatisfied, perpetual second-guessers we already were.” Parenthood, and living child-free, aren’t magical states that elevate us to higher states of being; they’re just one way or another to muddle through life, as we are. Maybe this perspective, at last, is the way past the parental wars.

Daum chatted with The Huffington Post recently about choosing childlessness, how we define ourselves and the art of the essay:

On the problem with how we talk about choosing not to have kids:
"I’ve felt like so many of the discussions around this often got reduced to just throwaway lines, like, 'Oh, I’d rather sleep late than have a child,' or 'I’d rather take expensive vacations.' It’s funny because those kinds of accusations or just labels, they often come from people who have kids, but more often I hear them from people who’ve chosen not to have kids! It’s almost like it’s easier somehow to say that you’re selfish or want to buy expensive shoes than it is to say, 'Hey, this just isn’t for me. This isn’t something that I want to do.'"

"I’m just fascinated by that. I’m fascinated by why it’s less of a taboo to say that you are a selfish, materialistic person than it is to say 'Hey, I just don’t want to do this.' That amazes me."

Why she thinks parents may feel threatened by the childless by choice:
"It’s really hard to be a parent, especially these days. The culture has ratcheted up the job of parenting so that it seems like there’s a lot at stake, all the time. It’s like a more than full-time job, and people have full-time jobs on top of that. When you’re in the middle of that, and somebody comes along and says, 'Hey, guess what, I’m not doing that, and I didn’t feel like I had to,' that can get people upset. They can get their backs up. Especially people who felt that it was something that they had to do."

Daum suggests that a defensive or angry reaction is misguided, thought understandable, arguing that "People who choose not to have kids do so because they respect the job of parenting so much that they know not to take it on if they know it’s not something that they’re up for, and I don’t know what to be a bigger tribute to parenting than that."

On whether the collection’s essays are “confessional”:
“'Confessional' -- everyone has their own definition of that. Confessional, to me, means that you have not made judicious choices in terms of what you’re including and what you’re not including. In my own work, I see what I’m doing as confiding to the reader as opposed to confessing to the reader. So I guess the litmus test for me with the pieces in the anthology was, did I feel like I was being confessed to or did I feel like they were confiding in me and the reader? Were they exploring something and taking the reader along with them?"

Why it’s tricky to write personal essays about taboo subjects:
"If somebody is talking about having an abortion, no matter how they talk about it, it’s going to come across to some people as confessional, just because it’s such a taboo."

On the value of professional writers:
"Writers are the ones who figure out how to put their observations into words. It was more important to me to have these ideas conveyed by people who really know how to convey ideas."

Whether we’re in a golden age of essays:
"Having been a working writer for 20 years, and being around publishing, it’s undeniable that there seems to be an appetite for essay and essay collections that did not exist 10 years ago, or certainly 20 years ago."

... and why that might be:
"I think people seem to want to read pieces that are shorter but not as short as the pieces they can read in small bites on the internet. It may be that the sort of long essays are hitting a sweet spot between the tiny morsels online and the full-length book."

She also tossed around a few more practical considerations that might be driving the trend: "Maybe people are busy! Maybe people are so busy, it’s like 'Oh, if I have this novel sitting here, it’s just sort of like, oh, my God, when am I going to sit down and read this,' you know?"

Some writing advice:
"You get to a point where you say, 'Okay, I have said exactly what I want to say, and to the best of my ability. This is the best I can do with this.'"

"You know what it is?" Daum went on, excitedly. "It’s kind of like in 'Friday Night Lights'; the coach says, 'Be perfect. All you have to do is be perfect.' And being perfect doesn’t mean getting every single thing right; it means that there is not one more thing you could have done to do a good job. It’s knowing that you have burned every calorie there is to burn on this, turned over every stone; that you have looked at every point and every sentence from every way; and that you’ve made a decision, the best decision you can, on each point, and moved on."

Why parents and non-parents should care about the viewpoints in the book:
"Ultimately, the book is about how to be an adult in the world and live authentically and make life choices that are right for you, and that is something that is everyone’s concern, and affects everyone." 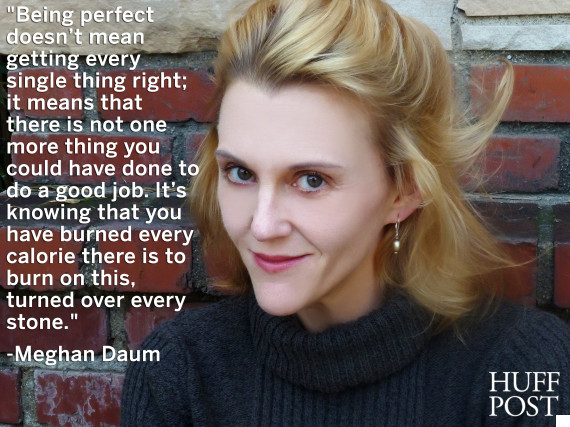