Last night we went to the launch party for Meghan McCain's new children's book, My Dad, John McCain, all about her dad's life story and rise to be the Republican nominee for the presidency. We didn't see Meghan there — though apparently she did arrive, eventually — but we did see Roberta McCain looking hale and hearty and chatting with well-wishers as songs like "I Love Rock N' Roll" played in the background. Around the corner there was a VIP room with a big flatscreen TV, tuned to Fox.

The party was for grown-ups, but the book itself is meant for children aged 5 - 10, according to the front flap, which also tells us that the book, "written with great love and insight by his daughter Meghan McCain, shows us the public John McCain and the personal John McCain in a way we've never seen before - making this American hero come to life before young eyes." Our eyes are, alas, not so young, and neither are yours, but we have nonetheless reproduced each page for you to judge that for yourselves. 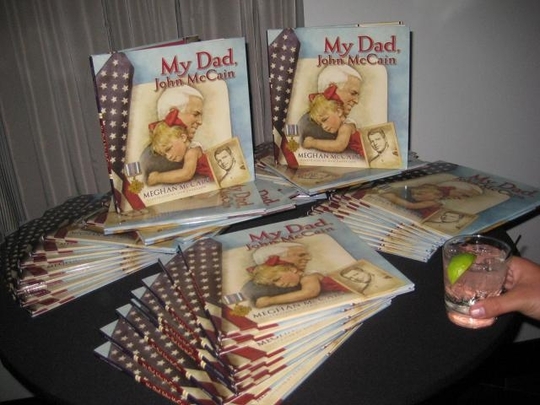 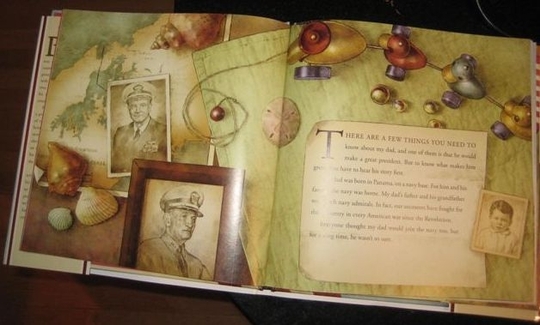 "There are a few things you need to know about my dad, and one of them is that he would make a great president. But to know what makes him great, you have to hear his story first." This is the mission statement of this book, and exactly what it does. 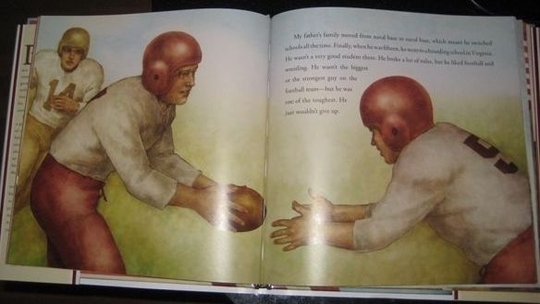 "He wasn't a very good student...[h]e broke a lot of rules, but he liked football and wrestling. He wasnt' the biggest or the strongest guy on the football team - but he was one of the toughest. He just wouldn't give up." 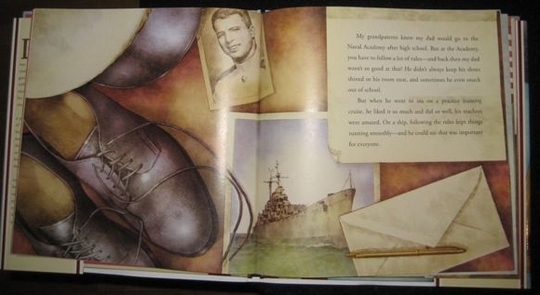 Here's McCain's time at the Naval Academy: "He didn't always keep his shoes shined or his room neat, and sometimes he even snuck out of school. But when he went to sea on a practice training cruise, he liked it so much and did so well, his teachers were amazed. On a ship, following the rules kept things running smoothly - and he could see that was important for everyone." 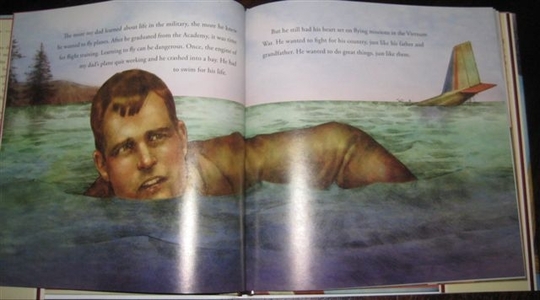 Here is the story of an early McCain plane mishap, where his engine "quit working and he crashed into a bay. He had to swim for his life." 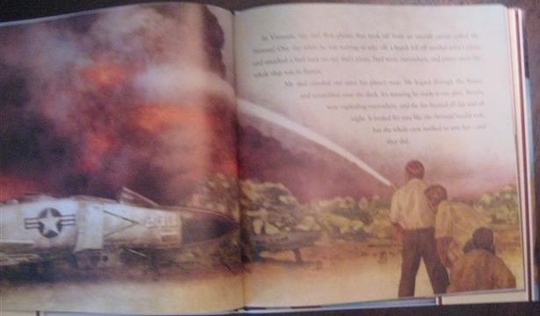 The story of the Forrestal, about which there has been a number of items written: "In Vietnam, my dad felw planes that took off from an aircraft carrier called the Forrestal. One day while he was waiting to take off, a bomb fell off another pilot's plane and smashed a fuel tank on my dad's plane. Fuel went everywhere, and pretty soon the whole ship was in flames. ...It's amazing he made it out alive...it looked for sure like the Forrestal would sink, but the whole crew worked to save her - and they did." 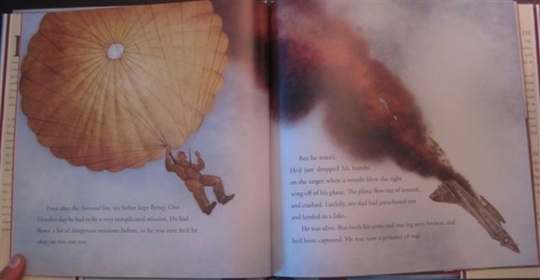 "He'd just dropped his bombs on the target when a missile blew the right wing off his plane. The plane flew out of control, and crashed. Luckily, my dad had parachuted out and landed in a lake. He was alive. But both his arms and one leg were broken, and he'd been captured. He was now a prisoner of war." Gee, why doesn't anyone know that about John McCain? 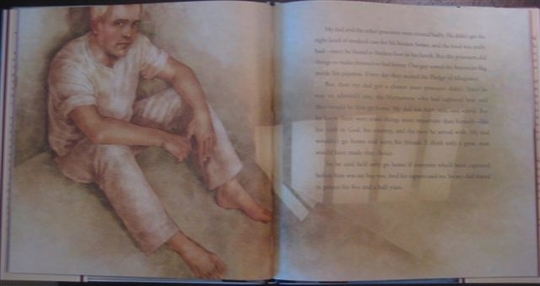 "My dad and the other prisoners were treated badly. He didn't get the right kind of medical care for his broken bones, and the food was really bad -- once he found a chicken foot in his lunch. ...But then my dad got a chance most prisoner's didn't. Since he was an admiral's son, the Vietnamese who had captured him said they would let him go home. My dad was hurt, sick, and scared. But he knew there were some things more important than himself - like his faith in GOd, his country, and the men he served with. My dad wouldn't go home and leave his friends. I think only a great man would have made that choice." 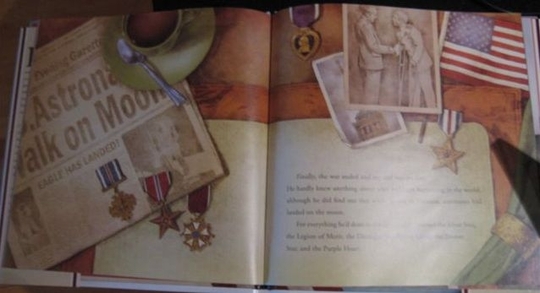 What McCain missed thanks to that decision: The moon landing (and, as he has noted, Woodstock.) For his service: "The Silver Star, the Legion of Merit, the Distinguished Flying Cross, the Bronze Star, and the Purple Heart." 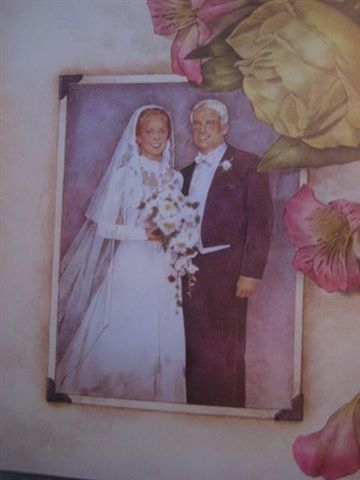 "After he got home, my dad met and married my mom, Cindy." 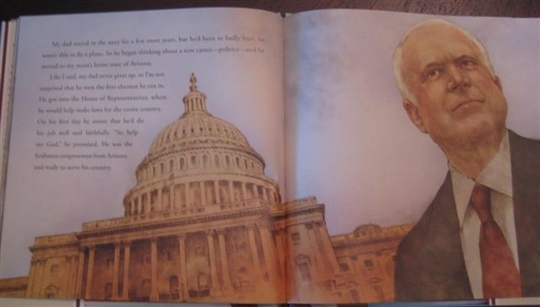 Mr. McCain goes to Washington: "My dad stayed in the navy for a few more years, but he'd been so badly hurt, he wasn't able to fly a plane. So he began thinking about a new career - politics - and he moved to my mom's home state of Arizona." 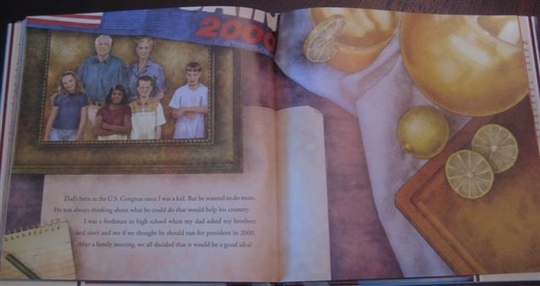 Here's the page dealing with McCain's 2000 run. Karl Rove is not mentioned. 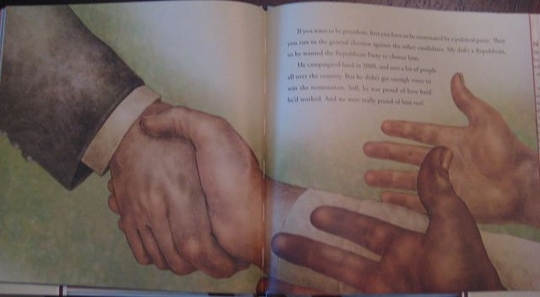 Here's the next page, where Meghan explains how the GOP picks a nominee at the RNC. She says that, regretfully, they didn't pick her dad. I am not sure, but I sort of feel like Karl Rove is heavily implied in this picture. 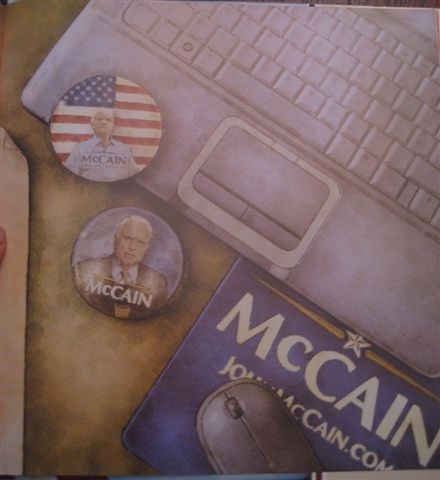 This was my favorite illustration &mdash somehow linking McCain to the personal computer, a marvel he has readily admitted he has no clue how to use. 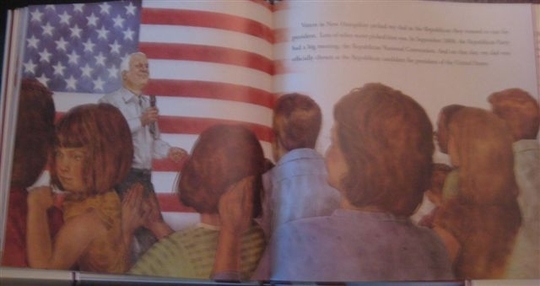 This book was clearly written before the RNC, in order for it to have its coming-out party here. But still, it once again raises the problem of writing about things before they happen — you can be pretty sure, but you can't predict the future. (Who remembers Mitch Albom?) Here's a line that Hurricane Gustav very nearly made obsolete, and, until tomorrow night has come and gone, no one can be 100% sure will happen: "In September 2008, the Republican Party had a big meeting, the Republican National Convention. And on that day, my dad was officially chosen as the Republican candidate for president of the United States." Man, if only she could have predicted Sarah Palin. I'd love to see the children's version of that. 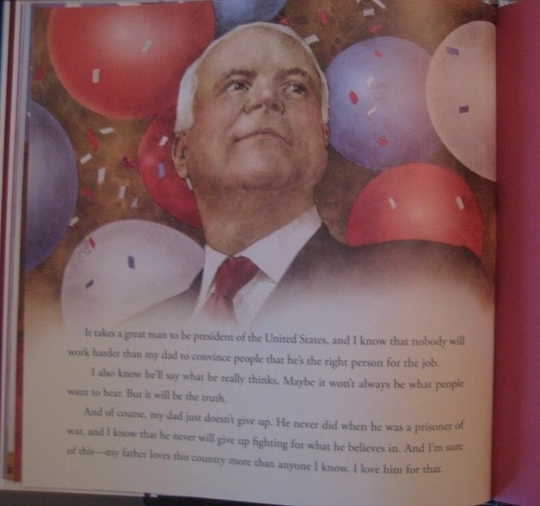 "It takes a great man to be president of the United States, and I know that nobody will work harder than my dad to convince people that he's the right person for the job....And, of course, my dad just doesn't give up. He never did when he was a prisoner of war, and I know that he will never give up fighting for what he believes in. And I'm sure of this — my father loves this country more than anyone I know. I love him for that."

So: here's a pretty complete look at the book, and John McCain's life in simplified-for-kids form. There are obviously details left out and sunnily painted (cf. his first wife), and I have no doubt that a few elements here that would draw fire from McCain critics. (See you in the comments!) What I find interesting about this book is the timing of its publication and how closely it resembles campaign literature.

It's hardly an issue for McCain-Feingold, but it seems a neat way to disseminate the official campaign narrative courtesy of Simon & Schuster, with pretty sweet timing (here it should be noted that there are both Barack Obama and Hillary Clinton children's books, though not written by family members). I guess this is the GOP-side equivalent of the will.i.am video? Or the Shepherd Fairey art-craze? Or the Paris Hilton response ad? Obama did win a Grammy for the audio version of his book...though it was published in 2006.

My friend Jeff thinks I'm being petty, but actually, I just think it's interesting — more than any other campaign, this one has seen supporter-generated content from outside the campaign take off and have an impact, often using technology in ways not contemplated when the rules were established. As long as there are rules, there will be ways to get around them, and as long as there are blurry areas there will be slippery slopes on either side of them. 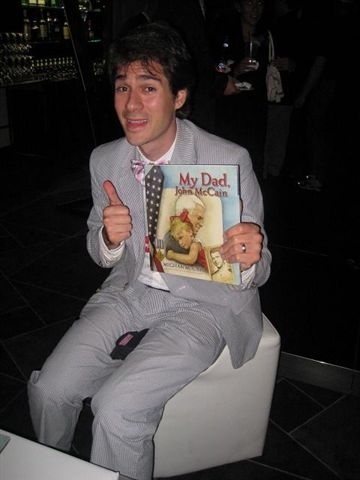 NB: Stein did not actually endorse the book, nor had he read it at the time the photo was taken. He merely posed with it. He did, however, endorse the seersucker.