Congratulations to Mei Xiang and the National Zoo on the new panda baby!

A cub is born! First photo of the cub, born today at 5:32 p.m. pic.twitter.com/CcHkRGSgHe

You can watch the new mom and her brand new itty bitty baby on the National Zoo's panda cams: Panda Cam 1, Panda Cam 2. The zoo also made an official announcement:

Giant panda Mei Xiang (may-SHONG) gave birth to a cub at the Smithsonian’s National Zoo 5:32 p.m. The panda team heard the cub vocalize and glimpsed the cub for the first time briefly immediately after the birth. Mei Xiang picked the cub up immediately and began cradling and caring for it.

All eyes were on the National Zoo's panda cams after the zoo broke news on Friday afternoon that giant panda Mei Xiang had gone into labor.

Watch the panda cams now! Mei's water broke a short time ago and she's having contractions. She may give birth in a few hours #cubwatch

On Friday at 5 p.m., it was too soon to say if Mei Xiang would give birth to an actual baby, said Zoo spokesperson Jennifer Zoon.

Zoon told The Huffington Post that "we can’t confirm pregnancy/pseudopregnancy until we either see or hear a cub -- so stay tuned to the Panda Cam!" 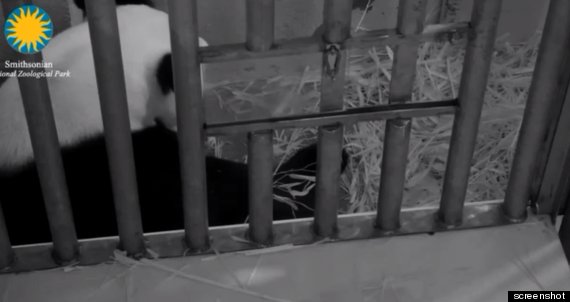 They've been a little wonky, with so many people tuning in to see a baby panda being born. In case you're having trouble getting through, watch this video of a baby panda meeting its mom for the first time.

National Zoo veterinarians have been on panda pregnancy watch since Mei Xiang was artificially inseminated in March, but haven't been able to determine if Mei was actually pregnant or was experiencing a pseudopregnancy.

Mei Xiang gave birth to a tiny little baby in 2012, but the cub died shortly after. Mei Xiang's surviving cub Tai Shan was born in 2005. He lives at the Bifengxia Panda Base in China now.

Paws crossed for our girl in Washington!