Meister Eckhart (1260-1328), a German mystic, a Dominican prior in garment but a Sufi at heart, is deeply embedded in the intellectual sensibilities of Ibn Sina (Avicenna) and Ibn Rushd (Averroes), whose works were available to Latin readers during the thirteenth century. Like most Sufis, Eckhart knows that God is a non-residential entity and cannot be found in houses of worship. God's manifestation is faintest in temples. It is perhaps non-existent in Avignon, the transient seat of Papacy during Eckhart's life. Eckhart shifts from convent to convent, between Germany and France, reason and intuition, sermons and writing, to sense the propinquity of divinity.

The historical testimonies reveal to Eckhart that ritualistic formalism is not a key certain to experiencing God. Buddha leaves the royal palace for the uncharted wilderness to free his being. Jesus enters the temple but overturns the tables of the money changers and the benches of those selling doves. Abraham raids the Babylonian sanctuary and smashes the idols the people are worshipping. Abraham's demolition of sacred images is not an assertion of monotheism over polytheism; it is a call to remove barriers to self-awareness. Muhammad discovers Allah in a cave away from the Kaaba, the popular house of worship. Despite spending most of his life in churches, Eckhart understands that the open doors of sacramental buildings are barricades to reaching God.

Much like sacramental edifices, however, the wilderness too can be spiritually barren for the seekers of God. Eckhart rejects seclusion, abstinence, and abandonment as prerequisites for retrieving God from the layers of personal darkness. A person seeking God can experience God in everyday life, in broad daylight, doing ordinary things, such as eating, walking, making love. For seekers, God is everywhere. The eye that sees can see God and the eye that does not see can also see God. "The eye with which I see God is the same eye with which God sees me," says Eckhart. 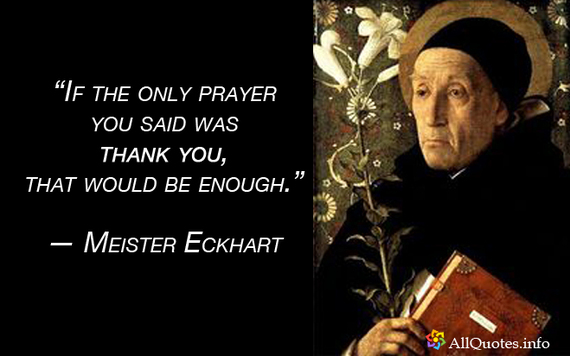 As an accomplished Sufi, Eckhart toys with heresy within the confines of orthodoxy. A Sufi does not abandon orthodoxy but explores its frontiers. "Ana al-haqq (I am the truth), says Mansur Al-Hallaj (858-922) and he is torn to pieces by the Caliph. "I am the way and the truth and the life," says Jesus and he is nailed to the Cross. Eckhart chooses a different route; he writes copiously to shroud the heresy, knowing that heresy must be concealed from militant fools. An open heresy is perilous, as it rouses the fearful but repressed doubts of orthodox communities.

Eckhart's statements, if taken out of context, are heretical. If the same statements are anchored within the framework of scholastic rationalism, they are orthodox. This art of speech is intrinsic to Sufi discourse. When a Sufi speaks, not everyone receives the same message. The Sufi speech is relative to the listener's existential stage (maqam). A heretic may find the speech conventional and an orthodox may find the speech sacrilegious. The fool may find the speech foolish and the wise a pearl of wisdom. The Sufi speech incarcerates the incarcerated and liberates the free. The Sufi speech contains nothing startling for the somnambulist; it ignites a bonfire for the awakened. The Sufi speech travels in time and space, with different speeds and colors and meaning. It is no surprise that the Europe is rediscovering Eckhart after eight centuries.

During his life as a Dominican friar, Eckhart is condemned and forgiven. In Avignon, Pope John XXII issues a bull to list Eckhart's numerous statements suspected of heresy. By the time the bull is issued, Eckhart has died. While facing inquisition, Eckhart withdraws every objectionable syllable he has uttered, less out of conviction more for fear of punishment. He retracts the word after illuminating the word. He corrects the errors after exposing the errors. Eckhart does the right thing because survival is a virtue for the learned. Centuries later, Galileo too would retract for survival. In hindsight it seems unwise for Socrates to drink Hemlock. The ignorant desires to kill the heretic and rejoices when the heretic kills himself. Knowing this, Eckhart does not oblige the ignorant.

In recent years, Eckhart is being uncovered in the West. Eckhart must be studied in the East and the South. In the finest Sufi tradition, Eckhart fuses intellect with intuition, theology with romance, fact with fiction, scholasticism with experience, rejecting the boundaries that delight the doctors of law. The theological borders exist for the uninitiated, just as the children need supervision to keep them away from the fireplace. The Sufi teacher of a divine text, parable, and state of mind, no matter how complex or comprehensive, illuminates the text, the parable, and the state of mind. For Sufis, there is no heresy in the kingdom of truth. Eckhart knows the limits of rational discourse, but also understands that reason is an expedient tool to draw the greenhorns into the realm of higher consciousness.