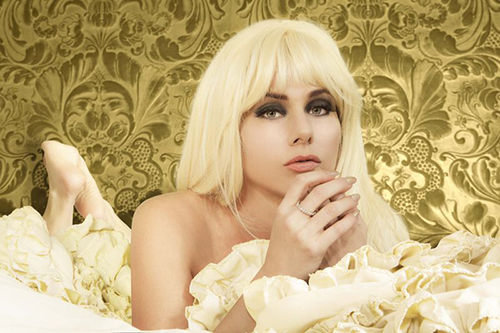 The question is: Where do I start on telling you all about the beautiful Meital Dohan?

The star is known for her roles on Showtime's Weeds and the series Woke Up Dead. Meital is also a published author and playwright.

More recently, Meital made an explosive entrance into the music scene with the hit "YUMMY." She currently has a hit song called "On Ya," featuring Sean Kingston. The video, directed by Ray Kay, is currently on the MTV rotation.

Meital is an artist who through sexy, seductive and soulful means wants to communicate what lies heavy on her heart -- all while entertaining us.

Meital and I conversed about what exactly she wants to bring to light with her striking sound and her new album -- and after you're done reading, you can see and hear Meital speak in a very unique manner.

You are unique in so many ways. It's refreshing to see a difference in an artist today and have it not be revolting or grotesque. You are very beautiful. Tell us the story behind how you became the persona we're all seeing blow up before our eyes. Let's start with your childhood.

Thank you, Bryan. I grew up in a small village called Harutzim just outside Tel Aviv. I was a very shy girl with two braids and a part in the middle. I was so shy that I wouldn't even undo my braids and let my hair breathe. At 13, I finally let my hair breathe and got a haircut. I had decided to go to an afternoon drama school and started acting.

It sounds like this is what you've always wanted to do, and that you're living your dream.

If there was an actual stage, I loved to act. However, out in society I was very shy. I wasn't sure this was right because of my introverted personality. When I was 17, I participated in a student exchange program to the U.S. and I got to act. That's when I truly realized that it was my favorite things to do.

You don't seem shy to me at all. What was it that finally brought you out of your shell?

Coming to the U.S. gave me a little bit of time away from my family. I went back to Tel Aviv, I put on high heels. My dad had some kind of some spray that makes your hair blonder, and I moved out of my house. That's when I became a wild chic! (Laughs.) I was unstoppable.

It has to be because of that accent that saying that makes you sound so cute. (Laughs) If it were anyone else it could be boring. Who would you credit most for your success?

I owe that to God. I owe all of my success to God. We truly do our best to be who ever and to do whatever. It's really not us, it's God.

It's quite apparent that you go against the grain of the mainstream, which is great. The industry might not always be too keen on that idea, but at least by creating your own path, you'll leave a last impression.

I'm not sure if it's going against the mainstream as much as it is bringing to light the subjects that we don't want to talk about, or not talk about things as much as we should. Issues and things that we are missing, we're all a part of this modern society. We're all slaves to this modern society, it almost seems like we are living for our cell phones. The cell phone companies should start paying us because we're always so preoccupied with using the cell phones. In the 21st century, in this era that we're living in -- it's changing right before our eyes and quickly.

I see where you're going and I've attempted to illustrate this point in past stories. We're always texting or emailing, but rarely do we ever sit across the table and have a glass of wine and some dinner. Is this a message that we can expect to hear in your music?

In the music I want to bring back the value of love and the value of relationships. We're very advanced and more so all the time. Who knows? In 20 years, you might be scheduling a call with my clone because I'm too busy with other things to converse with you.

Wow, the thought of that would be kind of scary. Wouldn't it?

Yes, or better yet, you might be able to speak with my holographic image. As we continue to advance, it will be a greater challenge to maintain our hearts, our sense of ethics, and our moral values.

Where do you think we're going exactly?

I'm not sure, but there needs to be more than just the pursuit of capitalism.

Actually, it furthers your point on how challenging maintaining our ethics and moral will be in an ever-changing world. Capitalism has completely diminished ethics in many circles.

Anti-depressant drugs are more popular than ever right now. People live alone, they miss warmth and love. The kids in schools are practicing self-hatred which is causing them to act out in the form of violence, among many other different ways.

Do you think that how much we have advanced confuses that issue further?

So, it's safe to say that your music will be an exploration of the human condition and still be able to entertain people.

My album is called I'm in Hate with Love. People feel that they don't even want to waste time on love. How crazy is that? The Beatles sang "All You Need Is Love." Sure, there might be songs about it now, but everyone keeps themselves so busy that they end up keeping someone they like and the idea love at a distance.

In our conversation, I can't help but liken you to Michael Jackson. In his music and in his life, he personally set out to make a change with all that he felt was wrong with our society. Would you say that you're looking to do the same thing?

My role as an artist is to give people my talent. My role is to share what I have with the world. While they're being entertained, if I can just have people start thinking and talking about these important issues among others, then that is my starting point. If that is the case and I can eventually inspire a change, then that would be amazing.