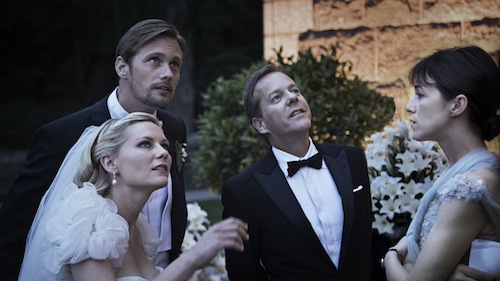 Without a doubt, Lars von Trier's Melancholia will be remembered as the film that brought about the filmmaker's misguided comments about being a Nazi and understanding Hitler, during a press conference at this year's Cannes Film Festival. Yet, I agree with the NY Times' Manohla Dargis when she confessed in her recent article to missing that distant time in our past when a great director would only be known by his work and nothing else. Those pre-Twitter times when filmmakers and actors spoke as little as possible and whatever faux pas they made would be reserved to an article in a magazine, or be a one-day headline for a newspaper and then be forgotten by the time their next film opened.

If that was still the case, Melancholia would be hailed as von Trier's most amazingly haunting film, a truly beautiful work of art, complete with great performances by Charlotte Gainsbourg, Kiefer Sutherland (in a post-24 welcomed return to movies) Alexander Skargård and of course, as recognized by her Best Actress award at Cannes, Kirsten Dunst. The film is visually splendid, the cinematography by Manuel Alberto Claro absolute genius and the set designs, by Jette Lehmann, and costumes, by Manon Rasmussen, lavishly outstanding.

Unfortunately, we live in times that play out much like our childhood game of the "Telephone." One celebrity makes a comment or gesture, the media pounces on it and the misdirected jokes of a self deprecating director like von Trier -- someone who has gone as far as saying that the finished product of Melancholia "looks like shit" -- become a serious, life-changing, career destroying villainy. No one concentrates on the positivity of the artistic product, opting instead to give into the negativity and scandal.

I personally watched Melancholia two days before the 10th anniversary of 9/11, in NYC. Enveloped by the dark screening room, I fell in awe of von Trier's cinematic ode to German romanticism, his very personal visual interpretation of the music of Wagner and the films of Luchino Visconti. I felt pride in my own mixed German and Italian heritages, what von Trier describes as that "German romance that leaves you breathless" and Visconti's ability to "elevate it to masterpieces" in his films.

As the film ended, I also uncontrollably wept the deepest tears I have been able to shed since the horrific events of one crisp, tragic morning 10 years ago. For that, I silently thanked the genius of von Trier, for having the vision to create a film that would at once show our fragility on earth but also exalt the power of humanity, while feeding our fears of alienation and framing it all in his exquisite shots and painting-like images.

If he's an imperfect human being, well, aren't we all? A wise friend of mine once said "if we only had perfect friends, we would all be alone." I say, if we only watched films by perfect people, cinemas would go out of business.

Melancholia opens in NYC and Los Angeles on November 11th, in limited US release on November 18th and is available throught Video On-Demand.