Hailing from the Republic of Slovenia, a European country rich in history and culture, Melania Trump is well prepared to represent the United States of America as First Lady with grace and wisdom. Her elegant presence, global work experience, international mentality, deep appreciation and great love for America are strong assets in the modern diplomatic role of First Lady. She brings a particular personal understanding of a complicated region in the world which historically has a significant bearing on the ongoing geopolitical crisis in the turbulent Middle East. Mrs. Trump's dedication to her primary role as devoted wife and "Mother First" is inspirational to mothers who often feel the pressure to place career goals before family. Melania Trump knows her priorities and clearly communicates the importance of imparting "virtues and values" to our children as the number one priority of parents, just as she learned from her mother and father, married for more than four decades. Mrs. Trump brings to the White House a unique perspective. She has lived in a once communist-socialist state of the former Yugoslavia and she knows first-hand the merits of life in a free, capitalist, entrepreneurial America. Mrs. Trump will be an exceptional American First Lady for the world stage.

Tale of Two Worlds and Where Dreams Do Come True!

Melanija Knavs was born in 1970 in Sevnica, a charming village-city, when it was still part of the former Socialist Federal Republic of Yugoslavia. Slovenia has been inhabited since pre-historic times. The history of Slovene territory dates back to 5th Century B.C. until present. Once upon a time it was in the Kingdom of Serbs, Croats and Slovenes, then the Kingdom of Yugoslavia and later ruled under the Hapsburg Monarchy. The Slovenes, mainly of Slavic background, maintained cultural autonomy throughout their long complex history. Although Melanija Knavs personal story began with a humble origin, the picturesque setting of her hometown's historic Sevnica Castle, a favorite stop for tourists, looks like a scene from "The Sound of Music" or an enchanting fairytale. Slovenia on the north borders Austria and has also experienced German influence including being occupied by the Third Reich in World War II. Sarajevo in another nearby former Yugoslavia state was the site where Archduke Ferdinand and his wife were assassinated, triggering World War I. Slovenia's western border is Italy and it was once part of the Holy Roman Empire and the Ottoman Empire. Predominately Roman Catholic, there are also Lutherans and Orthodox Serbian Christians, Muslims and a small Jewish community as well as reportedly a growing number of atheists in this interesting to visit nation.

Every young girl dreams of meeting her Prince Charming and being swept off her feet to a castle. Melanija Knavs became the successful fashion model Melania Knauss, fulfilling one exciting chapter in her life. But it was meeting and marrying her "true love" that made her dreams come true. She became his "Princess Bride" and he her romantic and adventurous Wesley. She became Mrs. Donald J. Trump in 2005 at The Church of Bethesda-by-the-Sea in Palm Beach, Florida, with the expressed mission: "to experience the clear and strong presence of God, and to understand and spread Christ's teachings through collective worship, learning, and service." Her desire is to "love and serve," first as a loving wife and mother of their son Barron. And if chosen, "to love and serve" the American people as First Lady of the United States of America. Her blessed life was complete with her happy marriage, but her full destiny is yet to be revealed.

Humble beginnings with an independent professional background, combined with the inimitable exposure and life-style of being married to the extremely successful New York Real Estate Developer Donald Trump, helps Melania Trump relate to people of all demographics and life stories.

On The Road of Wars and Peace

It was in 1970 as a teenager that my best-friend Bobbie and I visited central Slovenia and Sevnica, a special place in "The Green Heart of Europe," with lush hills on the Sava River-the greatest tributary of the Danube. We travelled to Ljubljana and drove throughout the entire seven states of the former Yugoslavia. Being from California, the magnificent Adriatic Coast reminded us of Pacific Coast Highway 1. We visited Slovenia, Croatia, Bosnia-Herzegovina, Montenegro, Serbia, Kosovo and Macedonia on our way to Greece, Turkey and finally Israel. I can recall how it seemed that everyone of different ethnicities and religions at that time in former Yugoslavia seemed to get along, although the economic conditions were severely strained. When Tito passed away in 1980, so passed any semblance of unity. Marshall Tito, President for Life, ruled with an iron fist and purportedly kept all factions in line and cooperating, albeit under a failed economic system. Yugoslavia was more open than the Soviet-controlled countries we visited. On a subsequent visit to this war-torn region in 2001, I discovered Medjugorje, a special peaceful place on a "holy hill" where "Our Lady of Peace" appears to villagers in apparitions and miracles abound since 1981, shortly after Tito died, promising peace and good when there is more prayer and love of God in the world.

Some analysts would argue that the Middle East, other than Israel, should be governed similar to the former Yugoslavia. That a "benevolent" dictator (if ever achievable) is necessary to protect the rights of minorities. It goes counter to our American Constitutional principles of freedom and democracy which guarantees the people the right to decide, but so does Sharia Law counter basic freedoms.

Hail Mary in Slovenia and The U.S.A.

May is the month of Mothers. For Catholics, May is dedicated to Mary, Mother of Jesus and Queen of Peace. It is interesting to note, Holy Mother Mary is the Patroness of America and Slovenia. Our Lady of Brezje, "Marija Pomagai (Mary, help me)", is venerated at The Basilica of St. Mary, Help of Christians. This sacred place is located just over an hour from Sevnica near Bled. Many miracles have been
attributed to Our Lady of Brezje since 1863. 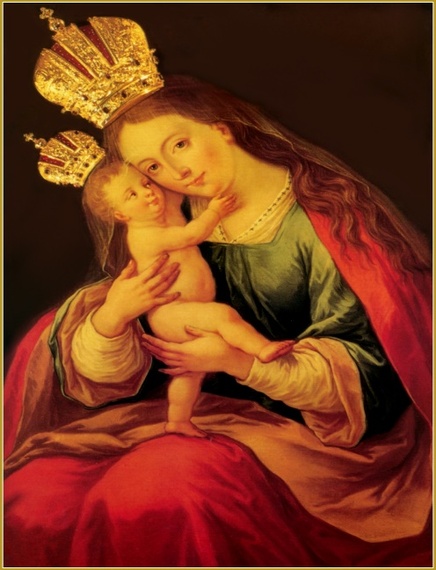 In Washington D.C., at The Basilica of the National Shrine of the Immaculate Conception, there is a chapel dedicated to Our Lady of Brezje with the image of the original painting found in the National Marian Shrine of Slovenia.

"Slovenian" has the word "love" within it and "American" has "can." Perhaps, the graceful "Slovenian-American" Mrs. Melania Trump, will be the First Lady of "Love Can, conquer all, bring us together and Make America Great Again." Born on April 26, appropriately the Feast-day of Our Lady of Good Counsel, lovely Melania Trump can lead us in "The Hail Mary" prayer to help our nation unite for peace, good and prosperity.

Hail Mary, full of Grace,
The Lord is with thee.
Blessed art thou amongst women,
and blessed is the fruit of thy womb, Jesus.

Holy Mary, Mother of God,
pray for us sinners now
and at the hour of our death. Amen.