A Florida mom who made her school-age daughter wear a humiliating T-shirt to class was arrested after police say they found evidence that she'd beaten her child with a belt.

Melany Joyce Alexander, 31, sent her daughter to West Hernando Middle School wearing a T-shirt scrawled with a note shaming her for bad grades, according to NBC Miami.

The shirt had writing on the front and back, and alluded to physical abuse. It read in part:

"I currently have all F's in all of my classes. I am not aloud [sic] to have a boyfriend no time soon. So back off before I get another good woopin [sic] like I got last night. Also I can no longer have ANY friends until ALL of my F's are ALL brought up to C's and up!!! 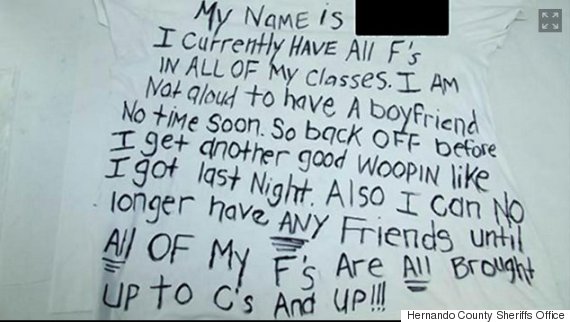 When school officials gave the student a different shirt to wear, they noticed she had been hit with what looked like a "leather belt with holes with metal divots, which left clear impressions in several places to include both arms, neck, chest, back and legs," according to a police report obtained by WFLA-TV.

"It's obviously someone who went way way over the line. They were obviously seeing red when they did this and it's disappointing because it's a child," Hernando County Sheriff Al Nienhuis told MyFoxTampaBay.com.

The girl's mother at first refused to cooperate when questioned by authorities. Eventually, she admitted to hitting the child with a belt because the girl was failing school, ABC Action News reports. 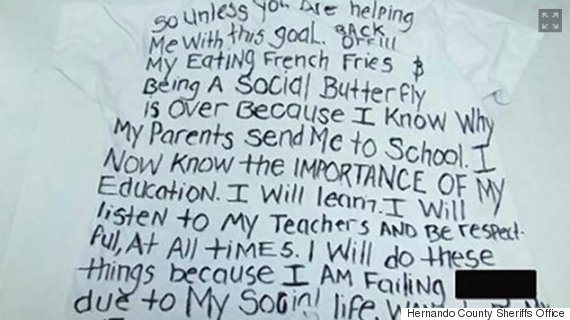 Alexander was charged with one count of cruelty toward a child in which the abuse causes great bodily harm or a disability. She was later released after posting $2,500 bond.

As of Monday, the girl was still in the custody of her parents, according to MyFoxTampaBay.com