The New York Times published a long-time-coming profile last week of the Indonesian performance artist Melati Suryodarmo. A trained dancer, Suryodarmo has been a known element in the performance art world since the high priestess of it, Marina Abramovic, pegged her as one of "10 young provocateurs to watch," in Harper's Bazaar last fall.

Abramovic doubled down to the Times. “Her work is very strong, very charismatic, extremely mesmerizing when she performs,” she said of her former student (Suryodarmo apprenticed under Abramovic for a spell in Germany, a link that shows in her penchant for "endurance" art). “You can’t take your eyes off her.”

And later, by email: “The most important thing a performance artist can do is to create a charismatic space around them and connect with the public. This is not easy, but Melati has the qualities and abilities to achieve this.”

Despite the addendum, Abramovic still failed to mention the real X factor:

Yes, Suryodarmo is none other than the star of the infamous and very viral "Adele Butter Dance" video. That's not to reduce her or her work, both of which are, as Abramovic holds, magnetic and clever. But plenty of would-be performance art stars could be described that way. What has stretched Suryodarmo's reach beyond local galleries and niche journals into the great mainstream is an unlikely guardian angel: YouTube user, Nathan Hatton.

It's a truly modern tale. Sometime between 2010 and 2012, YouTube user Nathan Hall (YTUNH) stumbled on a video. In it, a relatively unknown performance artist -- Suryodarmo -- dances in a tight dress and red heels on 20 blocks of butter. Arranged into a square the size of a chess board, the butter makes for a difficult stage. Suryodarmo's sensuous moves, inspired by Indonesian dance forms, are stymied. She flails comically, her eyes going cartoon-sized before each fall. Meanwhile, the audience is pin-drop silent, as befits a serious performance art piece. Its title: “Exergie -- butter dance."

The subtext of the performance, as the Times has now explained, is layered -- wrapped up in the loneliness of an immigrant in Germany, and Suryodarmo's first taste of butter. But the person known as YTUNH is not one for gravitas. This is evidenced by said person's next step. Our meddler swapped out the existing soundtrack of "shamanistic Indonesian drums," according to the video's description, and subbed in some Adele.

"Someone Like You," to be specific. It's an understatement to call the track an inspired choice. The video's views skyrocketed, propelled by the frankly hilarious combination of a woman falling on butter to the heartbreaking sound of Adele bidding a selfish lover goodbye. The reverent, photo-taking audience only makes the whole thing better.

"There is clearly nothing in the world that cannot be set to the soundtrack of 'Someone Like You' by Adele and come out looking a little more dignified (at first)," opined a writer at BBC America, in a lengthy analysis of why the video is so funny.

As for the key players in the unfolding drama, their fates are only right. Hatton tried and failed to establish a cottage industry, with a poorly performing "sequel," Skyfall Butter Dance. Meanwhile, Suryodarmo's original video -- the one with the shamanistic drums -- has actually outperformed the Adele version.

And this is a great thing. People came for the viral video, but they stayed for the source. Some curious minds on the internet developed genuinely interesting theories about Suryodarmo's intent, engaging with an identity that rarely gets play in the performance art world: a woman of color, from a country lacking in galleries and fast-talking agents.

Indeed, Suryadarmo was the only Asian to make Abramovic's list in Harper's Bazaar. Writing there, Abramovic singled out only one of her protégé's works: the butter dance. Because we all saw it.

Arts On Our Radar Marina Abramovic 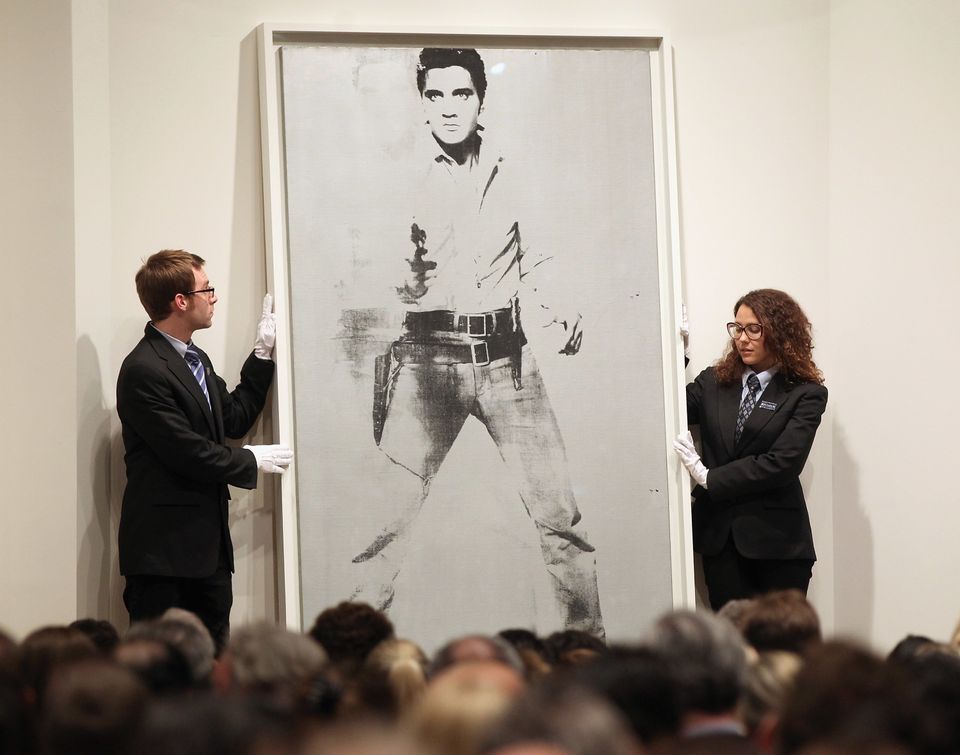 1 / 15
And Warhol’s ‘Double Elvis (Ferus Type)’ portrait of Elvis Presley is auctioned at Sotheby's on May 9, 2012 in New York City. The market for contemporary art has been of fire in recent months with Edvard Munch's 'The Scream' posting an auction record of $119 million at Sotheby's on May 2. (Photo by Mario Tama/Getty Images)
Getty Images