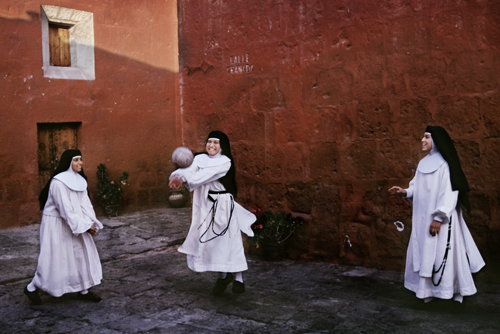 Arequipa, Peru. In this convent, nuns pray nine times a day and don't speak to each other -- except if they happen to be novices. Photographer Melissa Farlow tells the story of volleyball behind cloistered walls below. © Melissa Farlow

I'm shy. Many photographers will tell you that. And I think the camera is a reason to be some place, it's a reason to talk to people, it's a reason to be involved. And it gets me much closer to situations that I find interesting where I would never be there without the camera... I think people are fascinating. I'm always amazed how much they reveal to you. I'm an open person and treat people pretty openly and honestly and I'm amazed at the response I get... The camera always changes things, obviously, but my goals is to try to not let it. To be there long enough so that it isn't really part of the mix.

Melissa Farlow is equal parts self-effacing and talented. Early on in her career, she was part of a team which won a Pulitzer Prize for coverage of desegregation in the Louisville schools. After 17 years in newspapers, she began shooting stories for National Geographic Magazine.

She's done 14 for Geographic -- one of them, about America's public lands under the jurisdiction of the Bureau of Land Management, produced the image below: 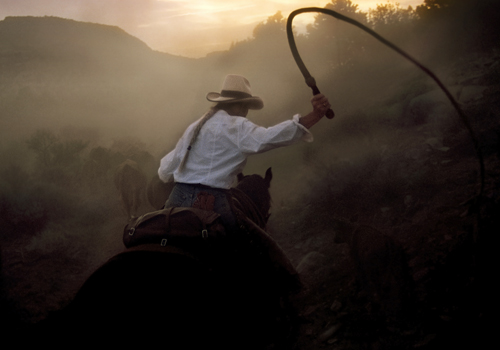 Beef Basin, near Monticello, Utah. Farlow says she was on a cattle drive when this shot presented itself: The woman with the whip is ranch owner Heidi Redd. © Melissa Farlow

Farlow explained the story behind the shot during her IRIS Lecture last month at the Annenberg Space for Photography in Los Angeles. The photograph was part of a National Geographic Magazine assignment on public lands overseen by the Bureau of Land Management in the West.


I heard about a tough cowgirl named Heidi Redd. She had prime land in south Utah and leased public land to run her cattle on. She was a quiet, no-nonsense woman. Really, really special. I rode with Heidi as they were moving the cattle to higher ground for summer. She brought a horse for me to ride. I'm sure she thought I would leave the next day. I hung in there... After four days in the saddle, time was running out and most of what I had were clichéd pictures in really bad light. I was really struggling because I wanted to make a picture that felt timeless. The last night I was following her and I was eating dust. My glasses were like a dirty windshield. I could hardly see. I was tired. It was hot. I was really sore. And the sun set. I thought it was over. And then I saw this scene in the last moments of light as it kicked up in the clouds. And I realized this is really hard work. For me this picture is a raw and honest portrayal of this life.

(You can watch a video of the entire Annenberg lecture here.)

Farlow notes that most of her assignments for National Geographic have been in the lower 48 states, shooting everyday life, not strange natural phenomena.

"The challenge is to try to make the ordinary seem interesting," told the audience at her lecture. 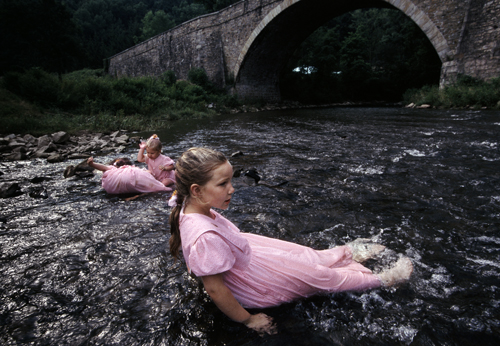 Casselman Bridge in Maryland. This photo is part of a National Geographic story on the United States' first federal highway. Farlow describes the scene: "Sunday church dresses double as bathing suits for the Byler sisters below the Casselman River Bridge. Now closed to all but foot traffic, the bridge was built in 1813 like a lone cathedral rib. The 50-foot arch was designed to clear a canal that never came." © Melissa Farlow

In an interview before her Annenberg talk, I asked her how she got people to relax and be themselves in front of the camera.

I don't have a strategy. One of the greatest compliments an editor gave me was that when he looked at my photographs of people, he felt like he was meeting them... I'm not a great photographer... but I think I have the gift to introduce people, to let them be themselves. And I don't know how I do it except that I do approach honestly and I do spend time. And I'm very sensitive to what's going on. I read people's feelings and body language.

Sometimes the body language can be surprising. In 1999, she was on the road in South America shooting for a National Geographic book on the Pan American Highway. Her advance person had managed to get permission to shoot inside a convent, that's when she unexpectedly became a sports photographer. (See photo above and description below.).

In Arequipa, Peru, we knew there was a convent and that nuns still lived there. It was a cloistered convent so no one went outside... I had permission to do an entire day which was the next day. But they said, would you like to see now, And I said yes. So we went inside to the convent ... They pray 9 times a day there and they don't speak to each other. It's total silence. They agreed that I could photograph the novices and we went down the walkway which opened up into a courtyard.

I heard laughter before I walked in and there were all these young nuns playing volleyball or kickball in the courtyard. And they were giggling and laughing and it was just this delightful scene and then they went to the garden and they sang. And they stopped and smelled the roses and they kicked the ball on their way out. And in 10 minutes it was over and they were gone. It was such a gift....

These girls -- the reason they were playing was the older nuns know that this life is so difficult, this regimented life that they're agreeing to -- and these were new novices. So this was their moment of freedom. 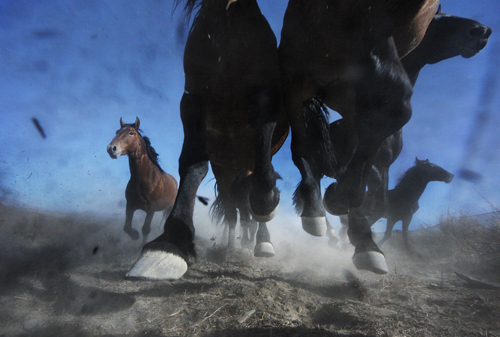 With help from her husband and fellow National Geographic photographer Randy Olson, Farlow set up remote devices that captured this ground-level shot of stampeding mustangs in Nevada. Farlow says that more than 30,000 horses roam on public lands -- half of them in Nevada. © Melissa Farwell


Farlow first fell in love at the age of 5. The object of her affection was a pony, she says. "A sad little guy." Her father had bought her the animal as a present. "I learned to ride and I was never afraid of horses, " she told me.

The pony turned out to be excellent preparation for two of her assignments with National Geographic -- one on Kentucky thoroughbred country and the other on mustangs of the American West.

Farlow said she never had the desire to be a wildlife photographer, but she was particularly intrigued by wild horses. She studied the behavior of the horses in reserves where they were left to roam free. Then she found a herd in eastern Oregon.

I spent three days trying to get close to them and they kept running and eventually I just walked up to them in the open -- instead of just sneaking up, they would like smell me hear me sense me and run off -- just out in open, slowly, walked up to them talking. Over a period of days, I got closer and closer to the point that I was walking with them to the water hole. Foals would want to come up and play. And one interesting experience -- there were 17 horses in this herd and every morning when I went out I counted them... just to see if it was the right herd because there were several bands. As I got closer and closer, I thought, There are 18 -- what is this?

One of the mares had had a foal that night and I didn't even know she was pregnant. She had been very close to me the night before. She had been standing three or four feet away, just kind of hanging out with me. I don't touch the animals, but the horse was comfortable with me being very close to her. So that day when I walked up, she literally walked toward me and pushed her baby and stood there looking. It was almost like -- 'Take my picture with my baby.' It was a wild experience.

(Online producer Rob Finch turned Farlow's images of mustangs into a video, complete with an interview with the photographer. You can watch below.)

Mustangs: Spirits of the Wild West (HD) from rob finch on Vimeo.

Farlow and her husband Randy Olson have been married 25 years. They met when they were working as photographers on separate newspapers and both decided to give up their jobs so they could have a life together. 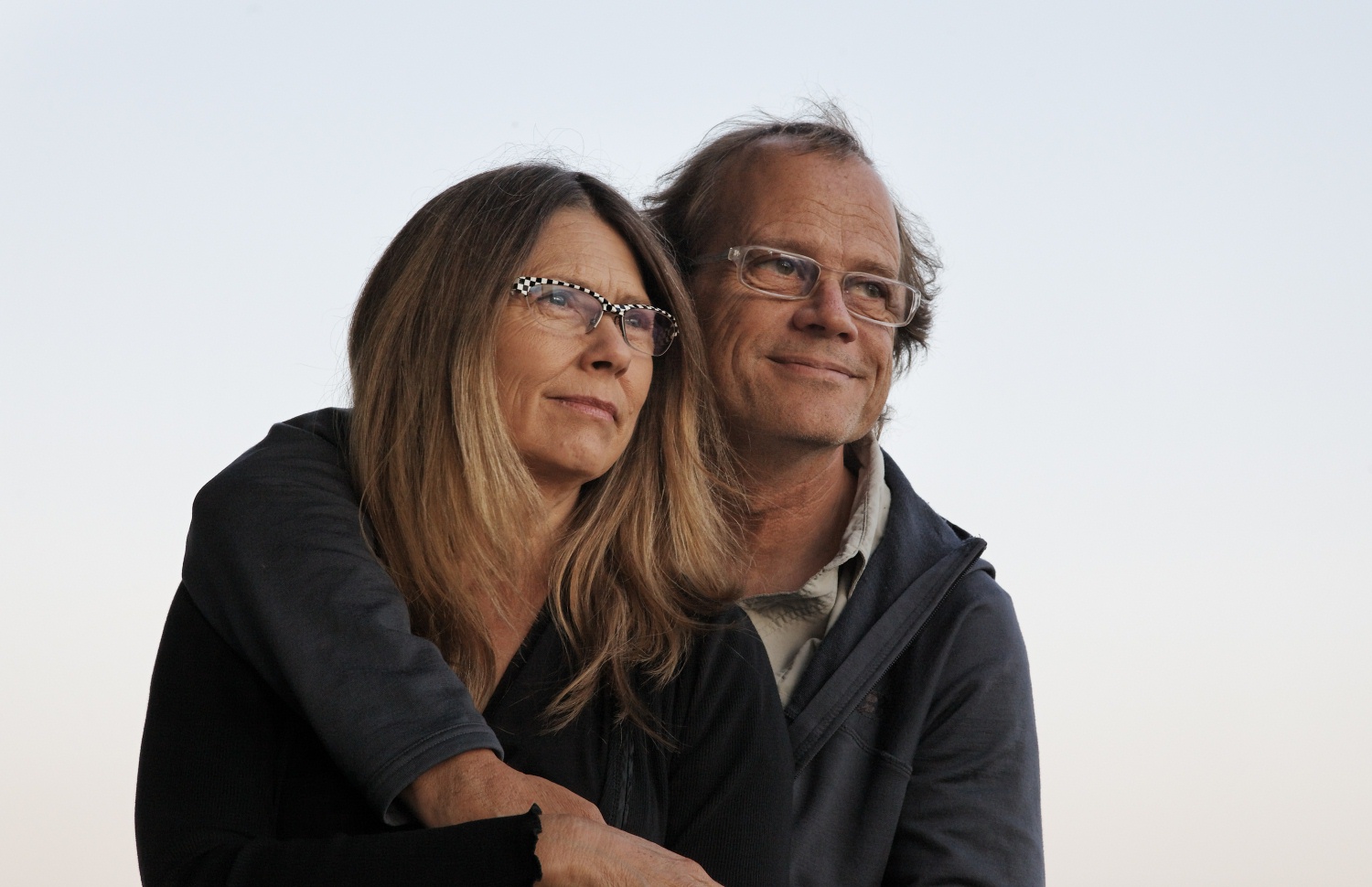 Farlow says living with another National Geographic photographer has benefits. "There isn't anybody who a more tough critic than Randy. And me to him. I don't mean that in a negative way. We do it with love." (c) Melissa Farlow


They team up in the field from time to time with one acting as assistant for the other. And they have also started a new project together.

We've lived a dual life for the past decade, bouncing radically from different cultures and back to our own comfortable culture and so we started reflecting on our experiences but also our images and trying to make connections on what it all meant. And we've been trying to find pairs and assembling little picture puzzles. We took all the photographs we've made in the last 20 years in 50 countries. Randy printed them out and we cut them out in little tiny pictures and we started trying to pair them and find new meaning... And so we started making these diptychs... We have an exhibit of this work at Eyewitness Gallery in Portland Oregon through April.

An example can be seen below. There are more diptychs and more on the duality of the photographers' lives on the Olson/Farlow website.

"The Discovery Is What I Love"

Melissa Farlow describes herself as a "documentary photographer." Her work, she says, is completely dependent on others and the story she gets from them.

"I'm a woman with a camera... I'm always thrilled if people respond to the photographs I'm making... but I don't go with the intention that I'm the one who's important. I think the artist has a vision and is creating something and I don't really take that role. It's not my story. It's usually the subject's story... [And those stories] evolve... When you set out you think you know what the story is, and it's always constantly evolving in new ways. The discovery of that is what I love."


Disclosure: The Huffington Post is a sponsor of the current exhibition running at the Annenberg Space for Photography -- "Extreme Exposure."