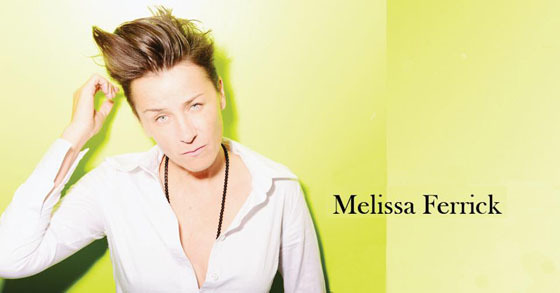 This week I talked with singer-songwriter Melissa Ferrick about her current tour and brand new CD which is her 12th original album to date. Ferrick has been performing her deeply personal brand of "rock folk" (as she calls it) for more than two decades. The self-titled album in many ways marks a new beginning was officially released with her two singles "Careful" and "Scenic View" and will soon be available in Vinyl on her own Right On Records label. In her new recording Melissa has simply delivered an eloquent and honest acoustic album with an undeniable level of maturity. For long-time fans this will be a welcome new arrival and for those who are just discovering Ferrick this is a fabulous introduction. Melissa is marking the middle of her career with a perfect solo return to songwriting and to herself as she begins a 16 city US tour from Maine to Florida. I talked to Melissa about her new music endeavors and her spin on our LGBT issues.

When asked what she would like to see happen for LGBT equality in the next few years Ferrick stated:

I would like to see more acceptance, certainly. I would like to see also the inclusion of our trans brothers and sisters more integrated. I've felt this way for a long time. I remember when I was part of a lot of the AIDS awareness that was going on, a lot of dinners and fundraisers. I lived in New York in 1989 and I became part of the Act-Up group down there in The Village but I remember there weren't a lot of women and I remember thinking to myself, you know if we all just came together supporting each other more we could get more done. So I think inclusion and crossing the boundaries between each other would be huge. Less separation and more combining our populations. So I'd love to see more coming together.