Melissa Forde is so much more than Rihanna's best friend. In fact, she's a talented photographer who is now adding another feather to her cap (no pun intended) with her role as creative director for a line of bucket hats.

Forde was handpicked by rap artist Wale to design brightly colored toppers for his line called Wrking Title. Forde told The Huffington Post that designing wasn't always a passion of hers, but she couldn't turn down the opportunity to make the perfect hat to fit her "tiny head" with "dope prints for everybody." Not to mention, she has the overwhelming support of Wale who revealed he loves everything about her.

"Us being real close friends, I just wanted to motivate her to do more because she has so much to give and teach these young black girls about being ambitious," he said. "I don't know anybody that's behind the scenes that's as dope as her and proud to be behind the scenes." 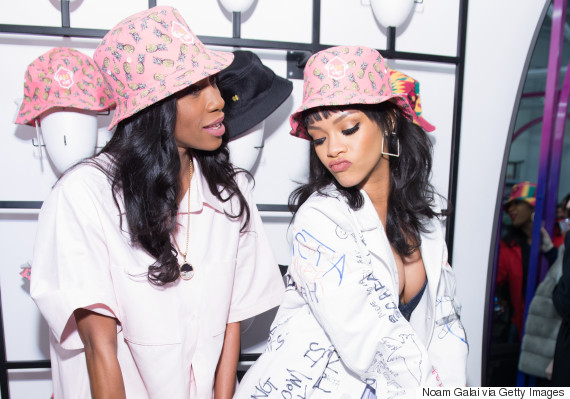 Forde's M$$ x Wrking Title Spring 2015 bucket hat collection consists of three styles: the "Black Beauty" (a fine black mesh), the "Rastaprint" (a new take on the classic print) and the "Pink Pineapple" (a vibrant reinterpretation of the tropical plant). When it came down to finalizing the actual designs and the ad campaign, Rihanna played a huge role.

Forde explained, "I showed [the pineapple print] to her and asked about it. She said, 'I love it.' She helped me book the model, London Zhiloh, from Instagram. She's very hands on."

While bucket hats have a long history in fashion and gained popularity in the late '80s and early '90s thanks to Run DMC, LL Cool J and the Wu-Tang Clan, Opening Ceremony co-owner Humberto Leon felt like "no one really did it quite right" until Forde.

Leon added, "[The bucket hat] functions as a necessity and then stylistically, she did an amazing job with the prints, fit and width. The idea of her taking on all those makes it perfect."